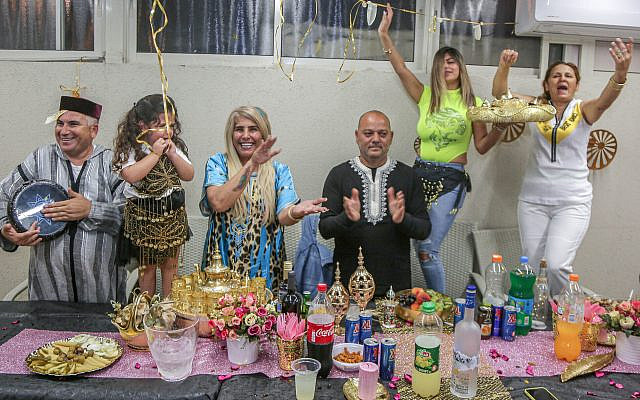 Members of the Ivgy family celebrate the Jewish Moroccan celebration of Mimouna, in the southern coastal city of Ashkelon, April 15, 2020. (Edi Israel/Flash90)

Poll after poll taken in Israel show that the term, hiloni, or secular Jew, has lost much of its meaning. Though a majority of Israelis still use that term to describe themselves, it has become a sociological description for those who send their children to mainstream public schools and do not vote for one of the religious political parties. Yet Guttman-Avi Chai found that 80 percent of Jews living in Israel in 2012 believed in God, and 65% believed Him to be the Author of the Torah and its commandments. The latter number fits well with a different study. Conducted at around the same time, by the National Opinion Research Center (NORC) at the University of Chicago, it showed that over 65% of Israelis not only believed, but were convinced of God’s existence. This was in comparison to approximately 17% in the United Kingdom, 41% in Italy and 60% in the United States. That religious faith and observance have become the default in this country is reflected even more clearly by the Pew survey of 2016, which demonstrates how much more religious the second generation of immigrants from the FSU are than their parents are (belief in God going from 55% to 70% and keeping a kosher home more than doubling from 24% to 50%). So where did the Israel’s secular pioneers go wrong?

Today, it is largely recognized that the group that did the most to prevent the secularization of the Jewish people in Israel were the Sephardic/Mizrahi Jews who arrived from North Africa and the Middle East in the early years of the state. As much as the secular Zionist establishment of the time tried, it was simply unable to convince these immigrants to accept the prevailing cultural agenda.

Moreover, those same Sephardic/Mizrahi immigrants turned the tables and went from being a population that was ostensibly influenced by the accepted norms to being the ones doing the influencing. For – in what veteran journalist Ari Shavit recently called Israel’s biggest rebellion – the Sephardim, gradually but unmistakably, used their numbers to change the Israeli “mainstream.”

However, it was not only a question of numbers. What draws outsiders to adapt a large part of the Sephardic lifestyle and usually unspoken outlook is a rootedness that provides an unspoken connection to one’s people that comes with the preservation of a tradition. This connection stretches across the generations, “vertically,” if you will, as well as the “horizontal” spreading to all other contemporary Jewish groups and communities. That connection made the Sephardim reach out – naturally and with no need for ideology – to other Israelis, as family.

The metaphor of roots can be taken further. Trees, via their roots, share the earth with other trees and plants. Though they sometimes compete for resources, they are also all connected by the ground. Likewise, different rooted peoples may quarrel and fight with each other (as families do), yet they intuitively understand that they are ultimately related. It is hard to miss the otherwise surprising harmony, and even warmth, between Jewish and Arab workers, for example, in Jerusalem’s famed shuk in Machane Yehuda.

Actually rootedness goes even one step further. Being connected to the Earth means being connected to all existence – to that which ultimately provides the conditions for the Earth to survive and flourish. On the human plane, that unspoken and intuitive connection is how traditional people of all faiths connect to God. True, just as some people find the unspoken connection between family members to be a human fiction, they will think the same about God. In that sense, it is something that cannot be affirmed without fully experiencing it. And that is precisely why the Sephardim have influenced other Israelis in ways that even Chabad has not been able to do. Whereas the latter have – at least partially – aimed to convince people, the former have simply lived out that which cannot truly be taught.

Here I am reminded of a discussion with the Russian father of a student many years ago. A thoughtful intellectual, he told me something that shouldn’t make sense. He said that having been raised in the Soviet Union, he could never come to believe in God. But he wanted his children to believe. I don’t think he was saying that he wanted them to have the practical benefits that may or may not come with belief. I understood him to be saying that, like any other intuitive sense, it is something that has to be nurtured and learned by example, ideally from an early age. Having missed out on it in his youth, it would be almost impossible for him to learn afterwards. But that did not mean that his own children could not learn it. Apparently he was not alone.

As with all gradual and incremental change, the transformation of Israeli society has not been registered by everyone. Many of this nation’s elite institutions that have such an oversized role in determining public opinion have not completely come to terms with it. But that too is changing. And as that happens, the unique combination of old and new, of (Middle) East and West that the new Israel is becoming will provide a unique model from which many other nations may want to learn. I don’t know that this is what the prophets had in mind about the messianic era, but on some level, it seems awfully close.