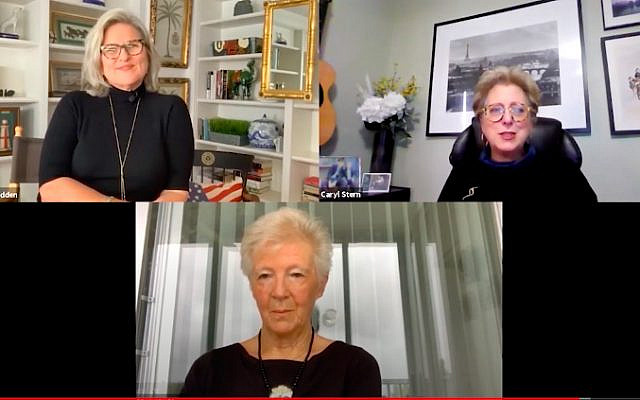 When Mignon Langnas, a nurse in a Jewish children’s hospital in Vienna, sent her small son and daughter on a ship to the United States after the Nazi invasion in 1939, she had no idea when — or if — she’d ever see them again.

It was an agonizing choice, but her own ailing parents and patients needed her, and she know her children were no longer safe in Austria.

Today, more than 80 years later, Mignon Langnas has a park named after her in Vienna, and both her daughter, Manuela “Manny” Stern, and her granddaughter, Caryl Mignon Stern, have proudly continued the legacy of human rights activism and philanthropy instilled in them from a very early age.

Caryl, formerly a top official at the Anti-Defamation League (ADL), spent 13 years as president and CEO of UNICEF USA — from 2006 to 2019 — before assuming her current position as executive director of the Walton Family Foundation. While at UNICEF, she advocated tirelessly for US government support of the agency and traveled the world raising funds for children devastated by the 2010 earthquake in Haiti, the 2011 drought in East Africa, and untold numbers of refugees from conflicts and climate disasters. Manuela Stern and her family in Vienna, 1939. (Photo courtesy of Jewish Heritage Museum)

On Nov. 18, Caryl and her mother appeared in an online panel co-sponsored by The Olga Lengyel Institute (TOLI) and New York’s Museum of Jewish Heritage — and moderated by NBC senior correspondent Cynthia McFadden — to discuss the incredible path both their lives have taken.

“The museum was founded 25 years ago as a living memorial to the Holocaust, an institution dedicated to remembrance, education and renewal,” said the museum’s president and CEO, Jack Kliger, in introducing the panel. “There are few better people who embody this notion than our featured guests today.”

Harry Wall, a member of TOLI’s board of directors, said more than 3,500 teachers across the United States and in 10 European countries have taken the nonprofit organization’s Holocaust education seminars since its founding in 2006.

“At a time of rising extremism and intolerance, TOLI’s work has never been more important,” said Wall. “Caryl’s life work on behalf of human rights causes truly embodies the meaning of tikkun olam, healing the world. Her story and that of her grandmother and Manny is a testament to how the tragedy of the Holocaust informed their lives in a positive way, to make a difference.” 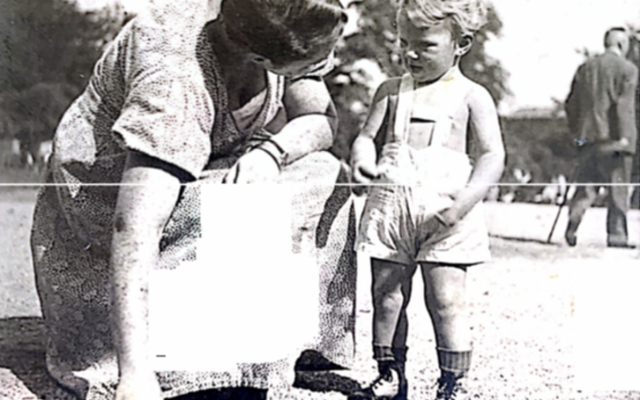 As a 6-year-old girl growing up in a typical middle-class Jewish home in Vienna, Manny witnessed antisemitism first-hand — though she of course at the time couldn’t understand what was happening.

“In my memory, this all started on a Friday evening. My brother and I were used to sleeping at my grandparents’ house,” she said. “We had gone to bed when suddenly my father appeared. He said, ‘children, get dressed quickly, we have to go home.’ When we arrived, there were half a dozen people in our living room all around the radio. It was the day the Germans invaded Austria. We went to sleep, and the following morning, the streets were filled with people cheering, and flags and motorcycles.”

As time went on, things clearly got worse for Austria’s Jews.

“My violin teacher, who was Christian, stopped coming. He was not permitted to teach here anymore, and I could no longer go to my school,” Manny said. “But I was a child, and the main danger was to the men. One evening when my mother was out, the Nazis came for my father, but he was fortunate. We lived on the fifth floor. He came downstairs through the front door and got on the trolley while they were outside smoking, so they never saw him. He then spent three days in the bathroom of a cousin’s house whose husband had already been taken.” 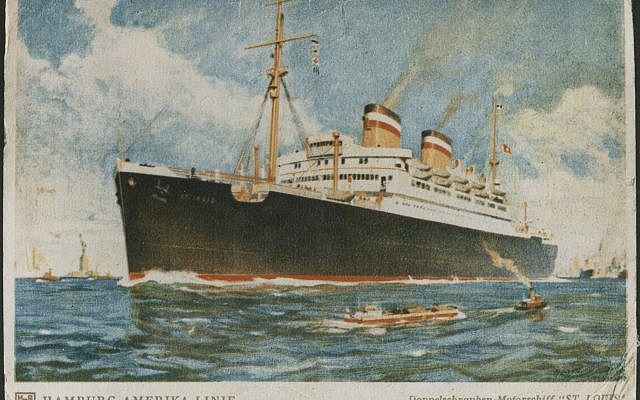 Picture postcard depicting the MS St. Louis, which carried 937 Jewish refugees from Hamburg to Havana in 1939. Cuban authorities prevented most of the Jews from disembarking. (Photo courtesy of USHMM)

Her father ended up as one of 937 passengers on the ill-fated MS St. Louis, a German ocean liner bound for Cuba. Prevented from disembarking, the ship was on its way back to Hamburg when the British government announced it would accept able-bodied men.

“My father was taken off the ship in England and spent two years there. That definitely saved his life,” she said. “He later went to Canada, and from there to the United States.”

In the meantime, Manny’s mother prepared her and her younger brother, George, for the trip to America, not knowing it would be seven years until the family would be reunited.

“This was an adventure. We were going to Aunt Nelly. But my aunt and her husband had just been married, they spoke very little English, and this was still the Great Depression. They were both working, making $12 to $15 a week, and there was no way they could take care of two little children,” Manny said, adding that as a result, she and George were raised in a New York orphanage. Back in Vienna, Mignon had stayed behind to care for her own parents — as well her patients, who were the product of mixed marriages between Jews and Nazis. That made her indispensable, allowing her to remain openly Jewish in Austria. One day in 1944, a very sick 12-year-old boy from the Kashki family, whose Jewish parents had been deported, was somehow smuggled into the hospital.

“My mother became his nurse,” Manny said. “One night, as the bombs were falling, it was customary to take the kids into the basement. But he could not be moved, and with several others who could also not be moved. My mother stayed with them throughout the bombing, and this little boy became one of her favorites. When the Nazis would come to inspect the hospital, she would hide him in a closet in the basement and lock the door.”

That boy eventually became a professor at Hebrew University and later wrote an autobiography titled “Yearning for Mignon.” 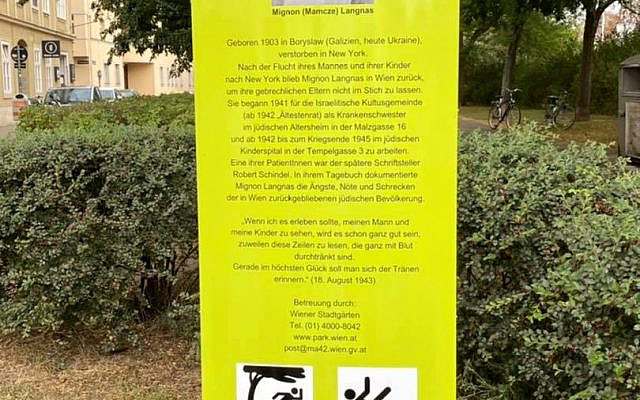 A plaque in a Vienna park honors Jewish nurse Mignon Langnas, who stayed behind in Austria during World War II and survived the Holocaust.

Caryl never met her grandmother, who survived the war, eventually made it to New York, but died there at the age of 46. But she said Mignon’s extreme bravery and determination has inspired her throughout her own life.

“She stayed in a place that she knew was really dangerous, she believed life would get better, she kept going to work and she took care of children. She had a purpose,” said Caryl.

“My attraction to ADL was the opportunity to be part of an anti-bias project, teaching children not to hate,” she continued. “When I think of her legacy, for me there was never a moment where I said, ‘should I go work for UNICEF?’ or ‘should I go work for ADL?’ For me, it was ‘what a privileged opportunity to actually be doing something about this.”

For Caryl, one of her most poignant moments with UNICEF occurred in Guatemala, during her visit to a shelter for teenagers and children who had been deported from the United States after unsuccessful appeals for asylum. “These were kids whose families had sold everything to pay for ‘coyotes’ to take them to the US,” she said. “We wanted to make sure the people they were being returned to were not the reason they were fleeing to begin with. When I arrived to wait for the bus with the children, I saw a group of moms weeping, because they had such high hopes for their kids to have a better life. They had made the same choice my grandmother made: to send her children away — but in this case, mostly with strangers on a dangerous journey.”

Once the bus arrived, a woman welcomed the kids back to Guatemala, a hot meal was served, and the children slowly started talking to each other.

“Then I noticed one little girl, about 6, who had her arms around one little boy, who was about 4. It was a brother and sister I told her ‘your mom is outside.’ And she said, ‘I will take care of him.’ And that was it for me,” said Caryl, for whom the scene triggered memories of the stories she had heard from her own mother . “I spent the next 24 hours with this little girl and this little boy. That lesson stayed with me, that it’s important to show kindness, it matters to sit with girls and boys in Darfur, Myanmar, wherever you go, and let them tell you their stories — even if you’ve heard them over and over again.”

Recalling the ordeal of her grandfather, who in 1939 escaped Vienna and crossed the ocean but failed to find safe haven in Cuba — only to be sent back to Europe, she said: “You can be the woman on the boat, or the world watching the St. Louis.”