If you don’t read the newspaper, you are uninformed;

if you do read the newspaper, you are misinformed.” (Mark Twain)

Sadly, Mark Twain’s quip could have been written about media reporting on the current conflict in Gaza.

While UN Secretary General Ban Ki-moon’s distress at seeing the carnage in Gaza is shared by all decent persons, it has now become obvious that his impression of Israel’s responsibility is a result of misinformation by the media. Though belated, several brave journalists who have returned from Gaza now admit that their reports from Gaza were not impartial because they were unable to speak freely while they were there. And being the fair minded person that he is, one must hope that these revelations will be brought to the notice of the secretary general.

Even after reaching their homes some speak with trepidation about possible consequences and some published statements have even been withdrawn due to threats, reminding us of the fear that intimidated the media during the 2005 violent Danish cartoon controversy.

Intimidation by Hamas has reached such proportions that the Foreign Press Association (FPA) numbering some 480 members representing TV, radio and print media from 32 countries felt it necessary to issue an official protest about

“the blatant, incessant, forceful and unorthodox methods employed by the Hamas authorities and their representatives against visiting international journalists in Gaza over the past month..reporters working in Gaza have been harassed, threatened or questioned over stories or information they have reported through their news media or by means of social media”.

Furthermore, most Western reporters in Gaza suffer from the substantial disadvantage of a lack of knowledge of Arabic which makes them completely dependent on their translators whose behavior is undoubtedly guided by the dictates of Hamas.

The question must be asked why the press and TV have failed to draw attention to this serious impediment to the accuracy and impartiality demanded by the rules of ethical journalism?.

When four children were tragically killed on a Gaza beach last month, world media indulged in a frenzy of knee-jerk condemnation of Israel indicating with certainty that there was no reason to fire on that beach, close to the Al Deira Hotel occupied by international journalists who witnessed the tragedy. Sadly, among all the reports, I have come across only one that added some context enabling readers to evaluate the story. William Booth in his July 16 report in the Washington Post opened the story explaining why that location was targeted. He wrote what others ignored:

“It is not unusual for militants to launch rockets from sites near my hotel”.

He could have added that it is unlikely that the naval vessel that fired the shell saw the children.

Recently there has been a welcome spate of conscientious honest reporting by journalists who have returned from Gaza telling how Hamas has been committing war crimes; using hospitals, mosques and schools (including UN schools) to hide combatants (dressed as civilians) and weapons. Some have resorted to social networks to publish what the mainstream media are too biased or too timid to publish. This is what Italian journalist Gabriele Barbati tweeted on July 29. 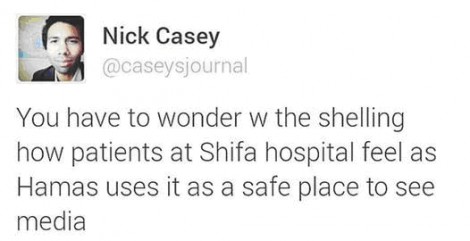 The Washington Post referred to the Shifa hospital as a “de facto headquarters for Hamas leaders, who can be seen in the hallways and offices,” John Reed of the Financial Times tweeted

Reporters Without Borders confirm that they have  been alerted by Hamas threats against Palestinian and foreign journalists.

On August 5, Indian TV station NDTV presented a remarkable video report by one of the most balanced commentators on the air, Sreenivasan Jain. He filmed the preparation of a rocket firing platform right outside his hotel window in a densely populated area. Jain explained that it was published after the team left Gaza as Hamas has not taken kindly to reporting of rockets being fired adding

“just as we reported the devastating consequences of Israel’s offensive on Gaza’s civilians, it is equally important to report on how Hamas places those very civilians at risk by firing rockets deep from the heart of civilian zones.”

In an Aug. 7 report Jain wrote

“the fear which hobbles the reporting such material: fear of reprisals from Hamas against us”, asking “how long do we self-censor because of the fear of personal safety in return for not telling a story that exposes how those launching rockets are putting so many more lives at risk, while the rocket-makers themselves are at a safe distance?” “There is an important detail about that spot which I mention in our video report which may not have fully registered – this was the exact location from where a rocket was fired five days prior. It happened around midnight, so it was impossible to film. Panic ensued. The Israel Defence Force (IDF) sent a warning to two hotels across the road to evacuate; within minutes they were empty. Those in our building slept in a safe room on the ground floor. And so that spot was seared in our memory”.

Blogger Elderof Ziyon who has established a reputation for credibility, published a translation of the harrowing experience of journalist Radjaa Abu Dagga, who told the French daily Libération how he was interrogated in an office in Shifa hospital in flagrant violation of international rules of war. His interrogators were young Hamas fighters in civilian clothing. Radjaa tried in vain to defend himself and to understand why they were acting against him but he concluded: ‘It is impossible to communicate with these people. Typically, because of threats, he asked Libération to remove the article from their website Elder of Ziyon wrote:

“There are many journalists that have been hanging around Al Shifa hospital. Very few have mentioned that the terrorist wing of Hamas is even present, let alone set up next to the emergency room. Is it because they are pro-Hamas? Is it Stockholm syndrome? Or is their hate of Israel so deep that anything that supports the IDF’s assertions of Hamas war crimes is considered off limits?” “But this is the fundamental story of the conflict: Hamas is using the entire population as human shields for their terror, and they deliberately choose hospitals to ensure that either they are not targeted or that any Israeli actions will look barbaric. The sad thing is, judging from many of the reports we have seen, some journalists are complicit in this.”

A video in Arabic published by Hamas Ministry of Interior advises

“cautious and effective social media engagement on Facebook and Twitter.; anyone killed or martyred is to be called a civilian and always add ‘innocent civilian’ or ‘innocent citizen’

And evocative of Pallywood, in an August 4 Washington Post article under the subheading “The scene was too neat”, one of the braver reporters Sudarsan Raghavan, told how Hamas staged events and scenes. He told of arriving at a mosque that had been bombed and amid the rubble, glass and metal he noticed that the scene had been prepared for publicity. On the ground visible for everyone to see, was a small, dusty carpet.

“On top lay piles of burned, ripped copies of the Koran, Islam’s holy book. The symbolism was obvious, almost too perfect. It was clear that someone had placed them there to attract sympathy for the Palestinian cause. A television crew spotted the pile and filmed it. Mission accomplished”.

In another example Raghavan tells of an incident in which young kids were killed. Hamas blamed Israel and Israel claimed that Hamas accidentally fired a mortar into the neighborhood.

“In the middle of the road, where the kids were killed, was a small pool of blood. At first glance, it evoked a sense of sadness and outrage. As I looked closer, I noticed a child’s slipper in the middle of the blood. The slipper was intact. There were no bloodstains. And next to the slipper, a black plastic toy gun. Again I noticed a television cameraman drawn to this powerful image. I moved on”.

About the Author
Maurice Ostroff is a founder member of the international Coalition of Hasbara Volunteers, better known by its acronym CoHaV, (star in Hebrew), a world-wide umbrella organization of volunteers active in combating anti-Israel media and political bias and in promoting the positive side of Israel His web site is at www.maurice-ostroff.org
Related Topics
Related Posts
Comments