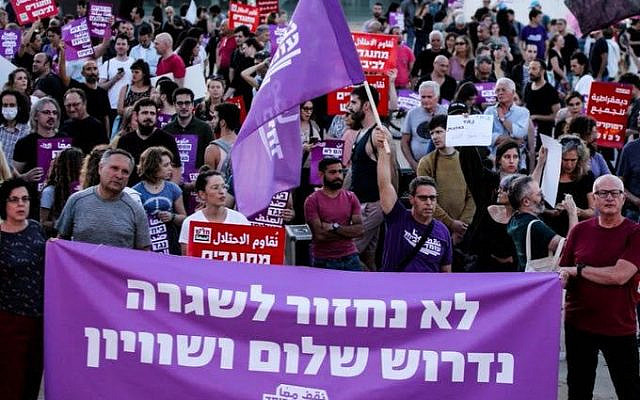 Israeli Jews and Arabs participate in a peace demonstration organized by Standing Together (The Alliance for Middle East Peace, 2021).

During and after the recent eleven-day war between Israel and Hamas, many American Jews like myself found ourselves in awkward situations. We were concerned about the safety of our friends and families in Israel, while dreading the humanitarian crisis in the Gaza Strip and longing for peace with the Palestinians. At the same time, we saw many of our non-Jewish American friends suddenly posting content on social media accusing Israel of genocide, ethnic cleansing, and settler colonialism.

Such inflammatory rhetoric has created further friction between American Jews and the modern progressive movement. Indeed, more and more on the Left are portraying the Israeli-Palestinian conflict as a classic good versus bad guy issue, where Israel is indisputably and completely in the wrong and anyone with any kind of positive affiliation with it cannot be included within progressive causes.

As an American Jew and a Zionist, I decided to write this piece for two reasons. First, to reaffirm why American Jewish Zionists must still be included within progressive circles and, two, to inform how Americans can live up to their progressive values in the context of the Israeli-Palestinian conflict.

Non-Jewish American progressives need to understand what Zionism means to us. To us, Zionism means that our Jewish identity is not just a religious identity, but is also a national identity. It is the idea that we are not just a religious community, but are also a nation of people and are therefore entitled to a sovereign homeland in order to practice our rights to self-determination. With that said, when we see content on social media suggesting that Israel and Zionism are racist and colonial ideologies, it comes off as anti-Semitic because it feels as if our identity, community, and right to self-determination are being delegitimized.

One might reference the American Jews who are not Zionists such as members from Jewish Voices for Peace (JVP) and IfNotNow as evidence that excluding Zionists from progressive causes is not anti-Semitic. However, while I certainly respect the opinions of those in JVP and IfNotNow and consider them to be a part of my community, they are hardly representative of American Jewish society. For example, a Mellman poll from 2018 and a Gallup poll from 2019 both found that roughly 90 percent of American Jews identify as pro-Israel and uphold favorable views of Israel, indicating that Israel plays a prominent role within our identity and community.

And just as a non-Black person cannot tell a Black person what is and what is not racist, a non-Jew cannot tell a Jew what is and what is not anti-Semitic. Racism is a social construct. It is up to the members of the given in-group to define it – and Israel and Zionism play too important a role within our identity and community to be completely dissociated from anti-Semitism.

Let me be clear: this does not mean American progressives need to give a free pass to Israel’s actions or policies. It also does not mean they have to become passionate Zionists. Rather, it means that non-Jewish American progressives need to be sensitive to what Israel and Zionism mean to us and not set an ultimatum for us to renounce Zionism and our support for Israel’s very existence before we can participate in progressive causes.

Indeed, American Jewish Zionists should be welcome in progressive causes. In fact, many of us are actively working to reconcile our Zionist and progressive values by supporting the Palestinians’ right to self-determination, which leads to my second point.

Although there is a significant power imbalance between Israelis and Palestinians, another relevant factor is the role of nationalism. Israelis and Palestinians both genuinely feel a historical connection to the land between the Jordan River and the Mediterranean Sea, but they also uphold separate national consciousnesses. They have separate and distinct collective memories of trauma and have constructed separate national identities through those collective memories. Both peoples care how the sovereign state they reside in within the land represents their narrative and their identity and allows them to practice their right to self-determination independently. In other words, what Israelis and Palestinians are seeking are not just human rights, but also national rights.

The conflict is then further driven by zero-sum mentalities present among both Israelis and Palestinians. Indeed, many Israelis and Palestinians also believe that all of the land between the River and the Sea belongs to them where the other side should only be allowed to live in the land with individual rights, but not collective national rights. Thus, simply “ending systematic racism” and extending “equal rights” will not necessarily resolve the conflict. Rather, a comprehensive and just solution requires a process of reconciliation where both sides come together to hear and recognize the other’s collective narrative and right to self-determination.

For instance, a couple of years ago, I was hosted by a Palestinian family for three days in Jifna, a small town in the West Bank. There, I not only heard about their family’s generational ties to the land and the hardships they go through while residing under Israeli military rule, but also witnessed it myself when I went out for the day and encountered checkpoints Palestinians have to go through on a daily basis and Palestinian villages under threat of demolition.

Hearing their stories and witnessing their hardships further motivated me to work for a just solution to the conflict that would get the Palestinians out of the occupation and allow them to practice their right to self-determination.

Yet, these experiences did not compel me to give up on Zionism, nor do I believe the occupation came out of nowhere. There is still a security issue that needs to be addressed and, just as we need to acknowledge the Palestinians’ connection to the land and their right to self-determination, the Palestinians need to acknowledge our connection to the land and right to self-determination as well.

Progressives in America can help support this process towards reconciliation between Israelis and Palestinians by becoming affiliated with grassroots movements that not only seek to end the occupation, but are also working for a solution that respects both people’s right to self-determination. Here are some organizations that generally espouse this vision: The Alliance for Middle East Peace (ALLMEP), Women Wage Peace, Standing Together, Americans for Peace Now, American Friends of the Parents Circle — Families Forum, New Story Leadership, Darkenu, OneVoice Movement, Israel Policy Forum, and J Street. This is not an exhaustive list, but it is a good starting point to become more engaged and help make positive change in both Israel and Palestine.

It is natural that the Palestinians have found a voice within progressive movements in America given the hardships they have endured, but in order to truly fight for peace and justice, progressives will need to take a step further. American progressives must not only advocate for the ending of the occupation and the Palestinians’ right to self-determination; they must also legitimize the Jewish people’s right to self-determination. A progressive solution to a conflict over land requires more than just human and equal rights. It requires mutual recognition of both people’s right to the land and the right to practice their self-determination over the land as well.

About the Author
Jonah Naghi is a Boston-based writer and the Vice Chair of Israel Policy Forum's IPF Atid Steering Committee in the city of Boston. A frequent commentator on Israeli-Palestinian and US-Israel affairs, Jonah has spent extensive time in the region and recently received his Masters in Social Work at Boston College and LCSW. All the views expressed are his own.
Related Topics
Related Posts
Comments
Advertisement