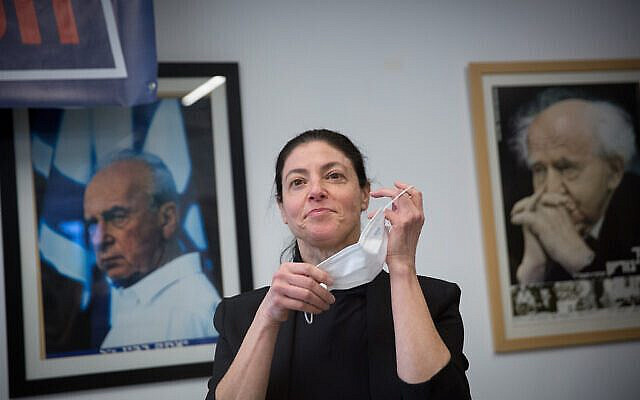 One can understand skepticism of political mergers, given the dismal results of the Blue and White effort on one hand and of the joint run by Labor and Meretz with the serial defector Orly Levy-Abekasis on the other. But in their main goal the mergers succeeded: Benjamin Netanyahu lost the last election because votes were not wasted in the center-left.

Netanyahu did remain glued to his seat because Knesset members Zvi Hauser and Yoaz Handel joined Levy and prevented Benny Gantz from forming a government. The former chief of staff was too weak to show them who’s boss, and all three are now with right-wing parties. But the lesson is to avoid Trojan horses – not to avoid useful mergers.

Israel now faces its fourth election in two years, and it turns out that the center-left has learned the wrong lesson. They are embarking on their journey with no fewer than five non-trivial parties competing for the narrow space between Yair Lapid’s centrist Yesh Atid and the Joint Arab List: Labor, Meretz, the Gantz Party (it’s really too sad to call it Blue and White), the Yaron Zelicha anti-corruption party and the Ra’am party of Mansour Abbas.

To enter the Knesset a party needs to have won four seats on account of the 3.25% electoral threshold – and no poll comes close to offering 20 seats to this space. That is why Ofer Shelach and Ron Hulda’i stepped down.  Self-regarding they may be, but that also gives them self-respect (and perhaps even a shred of responsibility).

A party that approaches the threshold without passing it will hand over about 2 seats to the right-wing bloc – such are the mathematics of the electoral system. In many polls, Netanyahu gets 59 seats – one shy of a tie and two short of victory.

Such a victory would be disastrous for the country. Despite some pinpoint successes his rule is corrupt, toxic and incompetent, marked by a devotion to counterintuitive appointments, sidelining of talented rivals and nonstop war on the “elites.”  As long as he is in power, there is no way to reboot relations with the Haredim or to approach peace with and separation from the Palestinians – both issues on which Israel is on a suicide course. As long as he is in power, the assault on the judicial system and the incitement and dirty tricks against political opponents will continue. The chances of political violence – or worse – are far from small.

Heavens to Murgatroyd! Why take such a risk?

Labor and Meretz analysts will claim that one plus one does not always equal two – meaning that a united party might receive fewer votes than the two running separately. This is probably true – fewer people will vote for them just to save them from the threshold, because the danger will be much smaller. But what does it matter if votes go down the drain and Netanyahu stays in power? Is one MK more or less from this or that party worth the defeat of the bloc? I do not think that too many supporters of these parties think so.

The mistake is so unforgivable that under normal circumstances it would be a disqualifier altogether: intelligence is needed to lead a country, or even to sit on the finance committee. But what has been done cannot be undone. So what next?

By choosing to join Netanyahu under the cover of corona excuses – violating his central and emphatic election promise not to serve under a criminal defendant – Gantz committed a mistake so grievous that it cannot be bounced back from. He now says he is not one to be fooled twice; but there was no shortage of people, including your faithful servant, who saw what was happening the first time as well. He should step down before the election. And the same – minus the cardinal sin issue – goes for Zelicha. One can only hope that the polls will show them the way. Perhaps they can be incentivized. Let Zelicha be finance minister. It cannot get worse than Yisrael Katz (unless the other Likud candidates are taken into account, of course).

Thus we arrive at the main issue, Meretz and Labor. The parties are almost identical. Labor’s new chairwoman Merav Michaeli is left arguing that her party is more centrist, which was true in the past when Labor competed for power; but now it is if anything more feminist than Meretz (Michaeli is herself the country’s standard bearer on this issue) and less security- oriented given Meretz’s hosting of tough-talking former deputy military chief Yair Golan.

At least one of them (in my estimation Meretz) will hover around the electoral threshold as balloting approaches. That party should withdraw and endorse the other in exchange for three significant positions in the coalition (including a minister of its choice) at the expense of the other’s quota (which should grow precisely because of the withdrawal. Because Netanyahu is not involved, the deal probably will not require special legislation and bank guarantees.

It may be a drag for entitled types not to be in the Knesset but the government is more important and their public will be pleased. Perhaps next time they will summon up the wisdom to create the Social Democratic Party that should have been established now.

As for Ra’am, I fear that not much can be done. Its split from the Joint List is the result of another clever machination by Netanyahu, who flirted effectively with Abbas. So Abbas will run, probably win about 2% (as polls show), miss the threshold and thus hand a seat to the right-wing. If this suffices to enable Netanyahu to squeak through yet again, perhaps he’ll make ambassador.

The rump Joint List needs to do everything possible under the sun to bring Israeli Arab voters to the polls, and that will be difficult after the trauma of seeing Gantz leave them at the altar in his deal with Netanyahu. Something more needs to happen.

That something must come from the leaders of the Jewish center-left. It must be made clear to the Arab voter, unequivocally, that the indefensible boycott of them has ended. The Joint List must be formally, officially and unequivocally be invited into the government that replaces Netanyahu’s. That is the smart thing and that is the right thing.

Yes, Likud’s propagandists will find every annoying Tweet an Arab politician has ever produced. Let them. Ignore them.

Doing the right thing can summon up a force of nature.  It clear the skies, it heals the wounds, it changes the game.  Stop being afraid.

About the Author
Dan Perry is the former Cairo-based Middle East editor and London-based Europe/Africa editor of the Associated Press, and served as the chairman of the Foreign Press Association in Jerusalem. A technologist by education, he is the Chief Business Development Officer of the innovative ad tech company Engageya, and Managing Partner of the award-winning communications firm Thunder11. Follow him at twitter.com/perry_dan www.linkedin.com/in/danperry1 www.instagram.com/danperry63 https://www.facebook.com/DanPerryWriter/ https://muckrack.com/dan-perry-22
Comments