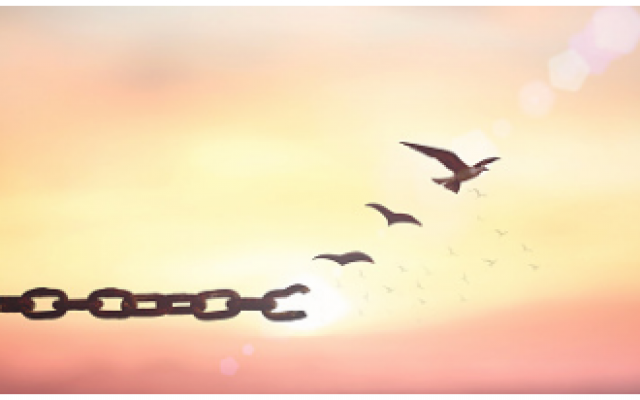 Once, there was a beggar who would drag himself from apartment building to apartment building, climbing the stairs and knocking on all the doors for a few pennies. Oh, how he wished there were elevators in those buildings so that life might be a little easier for him. One day, a friend saw him and asked, “What would you do if you won the million-dollar lottery?” to which he answered in the blink of an eye, “I would install elevators in all those buildings so life could be a little easier for me when I go begging.”

You see, this beggar had a poor man’s mentality, such that even if he won the money and became a millionaire, he could only think in terms of his begging.

Passover is described as the season of our freedom. “In every generation and day, a person must see himself liberated from Egypt.” In Hebrew, the word for “Egypt” (Mizraim) can be interpreted as “constraints and limitations” (Maitzarim). This season, specifically by eating the special hand-baked shmurah matzah and drawing inspiration from the story of the exodus, we are granted the opportunity to liberate ourselves from the many internal constraints imposed by the inner Pharaoh.

Inside each one of us, there is a positive Godly force and an evil taskmaster interested in controlling and directing us in self-destructive ways. He often succeeds in subduing the good so that it is suppressed and not allowed to flourish.

The Haggadah, the Passover story, tells us three important elements must be considered in the progression of liberation: Pesach, matzah, and marror.

Pesach means “to pass-over” or lift oneself above one’s circumstances. We do not always have to confront our challenges head-on; many times, raising ourselves above the situation helps us take a more holistic view of our problems.

Matzah represents humility, as the matzah is flat and not inflated like bread (ego). As big as a person’s ego may be, in the end, it is his own bubble, separate from anyone else. Humility allows a person to connect with others, and it is only with the help of others that a person can truly expand and move forward in life.

Marror is the bitter herbs. Recognizing that difficulties are part of life is a vital step in attaining freedom. The only way a person can bring the best out in himself is through hardships and challenges. Difficulties are God’s way of telling a person, “I put you exactly where you are, because I know, only through this experience and journey will you reach a better destination in life.”

When practiced correctly, with care taken not to come into contact with any leavened food, and eating the Shmurah Matza on the first two nights of Passover, Passover grants us the strength and power of freedom for the rest of the year.

A great mystic, Rabbi Yitzchak Luria, the Arizal, teaches us that anyone who is careful not to have even the minutest contact with any leavened products during Passover is guaranteed not to sin inadvertently for the entire coming year!