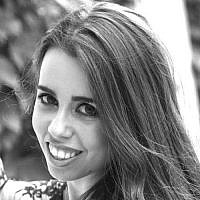 The Blogs
Tehilla Katz
Apply for a Blog
Advertisement
Please note that the posts on The Blogs are contributed by third parties. The opinions, facts and any media content in them are presented solely by the authors, and neither The Times of Israel nor its partners assume any responsibility for them. Please contact us in case of abuse. In case of abuse,
Report this post.

As a writer, I oftentimes receive questions such as,

Tehilla, are all your articles so inaccurate?

Why has no one sued you yet?

It’s been two years. Why is your Hebrew still so bad?

But the most common question that I receive by far — we’re talking one, maybe even two people have asked me here — is the following: if you complain about every form of bureaucracy, why haven’t you yet written about the Israeli medical system?

Frankly, I will be the first to admit that I know little about the world of medicine. I spent 18 years of my life under the notion that a strep test was a pop quiz about throats. When I made Aliyah, I chose my Kupat Cholim by closing my eyes and randomly jabbing my finger at one of the four options my Aliyah advisor offered me. I also zoned out when he explained about booking appointments, thinking that it would all make sense someday. Of course, this did not happen. Eventually, it was no longer socially acceptable to tell people I wasn’t sure what Kupat Cholim I belonged to, so I just prayed that I wouldn’t get sick. For a decent amount of time, this method was fairly successful. I did my best to stay healthy by occasionally eating vegetables and not operating heavy machinery. But then I was felled by some pesky smallpox.

Up until this point, things had been going smoothly. It had been a while since I last introduced myself as a fork in Hebrew, or received a scary notice in the mail and was feeling pretty self-satisfied. Here is the truth about adulthood, however. When you think you’re doing well and maybe, just maybe, are getting the hang of this independence thing, you get smacked on the head with something you weren’t expecting, like a shovel. The following day I woke up sick: streaming eyes, a temperature, self-pity, the works. I called my sister and informed her I was dying. I had Googled my symptoms and was certain I had yellow fever. Or smallpox. (I should note here that it was most likely just the flu. However, it felt like smallpox, so that’s what it was to me).

“Hmm.” she said unsympathetically. She did not sound as concerned about my disease as I was. “Well then, go on your Kupat Cholim app and book yourself a doctor’s appointment.”

I mumbled something unintelligible.

“What do you mean you haven’t figured out how to do that yet? What on earth were you planning on doing if you got sick?”

I told her that my plan was to NOT get sick, which sounded quite stupid when said aloud.

“Do you need me to come over and help you? It’s pretty straightforward. “

By golly, I would not have my younger sister organize my doctor’s appointment for me. I might have smallpox, but I still had my pride. If she could do it, so could I!

I lied and announced I had already booked one, and that it was probably too late for me anyway, and hung up.

I wasn’t a total novice. I once had spent an hour on hold waiting to book a corona test only to be informed that I had never registered with that branch at all, so I somewhat knew what to do. I logged into my Kupat Cholim app for the first time, typed in my age, address and date of birth and smoothly booked an appointment for 9 am. Ha! This was child’s play.

I arrived at the clinic ten minutes before nine, took my number, and sat down on the plastic chairs in the waiting area. A while later, when my name still hadn’t been called, I politely asked the lady behind the glass shield at the reception desk what was taking so long. “Motek, your appointment is for 9,” she said, using the patronizing voice reserved for small children and American immigrants. “It’s only 9:45 now, relax.” She rolled her eyes at my classic rookie blunder of being punctual. At last, at 10:15, it was my turn. I rose, stuffed my mountains of tissues into my handbag and went inside. As I described my symptoms in a mixture of Hebrew and English to the doctor, I couldn’t help feeling proud. I had done it! That would show my sister. Halfway through me giving an in-depth analysis about my sneezes, the man cut me off.

“Giveret, what does this have to do with me?”

Well really! What a shocking bedside manner. He could at least pretend to be interested.

“Aren’t you the doctor?” I asked. I was too ill for this nonsense. Perhaps my Hebrew hadn’t been clear enough.

Turns out, while I had cleverly selected the right city, street and time. I had forgotten to specify which type of specialist I needed and that was why I was now sitting in front of a man whose specialty was gallbladders and rambling on about my sinuses.

I did the only acceptable thing to do under the circumstances. I began sniffling and surreptitiously wiping my eyes on a pamphlet for travel insurance. The gallbladder guru took pity on me. He walked me back to the reception counter where he and the woman behind the plastic shield had a conversation in rapid-fire Hebrew, which I understood sufficiently to know that it wasn’t flattering. The secretary then told me I was in luck: even though all the doctors were fully booked until at least 2025, a Dr Sonya had had a cancellation and could see me at 11. “You’ll love Dr Sonya!” she promised. “All the Olim do. She speaks English.” By now, I could barely stand. I slumped to the floor in front of Dr Sonya’s door, hoping to live long enough for the lady to examine me. I consider myself fairly easygoing, but at this moment I was very prepared to sneeze on anyone if they cut the line.

At 12 pm, Dr Sonya showed up, unlocking the door to her room. She barked at us to wait and called everyone in one at a time. When it was my turn, I double-checked her plaque that she was the right doctor and hobbled into her office, which smelled strongly of onions. The walls were yellow and covered in diplomas and pictures of stern-looking parrots.

Dr Sonya was the most terrifying woman I have ever met. She was short, Russian, and permanently angry. I bet she ate her own copy of the Hippocratic oath. She likewise did not speak English. “What’s the problem?” she barked, scrutinizing my Kupat Cholim card for forgeries. Meekly, I repeated in Hebrew my issues. It soon became clear that Dr Sonya spoke little of the Holy Tongue. This was a shame because I had no clue how to say, “My head is falling off and I am a shell of a human being” in Russian. The good doctor then gave me a plastic cup and pointed towards the bathroom. “No thank you,” I said politely. “I’m not thirsty.” Dr Sonya yelled something at me in a mixture of Russian and Hebrew, which made me think she had wanted me to do something other than drink from the cup. Dimly, I heard her yell I should just take aspirin and not be a spoiled American, but I wasn’t sure what was real anymore. It might have been hallucinations from the smallpox, but suddenly the parrots now all had Dr Sonya’s face. After this, I figured I would at least die with dignity in my bed, informed her I had made a miraculous recovery, thanked her and left. No wonder they thought Olim loved this woman. Our Hebrew just isn’t decent enough to complain at the front desk.

Turns out Dr Sonya was right. I stayed in bed for a while, and the smallpox seems to have disappeared. This gave me a chance to work on my novel: Harry Potter and the Adventures of Socialist Medical Care, which is totally original and not borrowed from any pre-existing work of fiction. And if anyone asks if I plan on using Israeli medical care again, the answer is yes, of course. The system is impeccable, a testimony to our wonderful country and I’ll be booking myself a follow-up appointment any time now, as soon as I remember my login password.