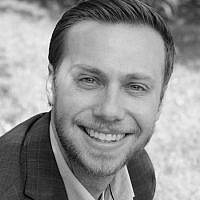 The Blogs
Michael Rose Knopf
Apply for a Blog
Please note that the posts on The Blogs are contributed by third parties. The opinions, facts and any media content in them are presented solely by the authors, and neither The Times of Israel nor its partners assume any responsibility for them. Please contact us in case of abuse. In case of abuse,
Report this post. 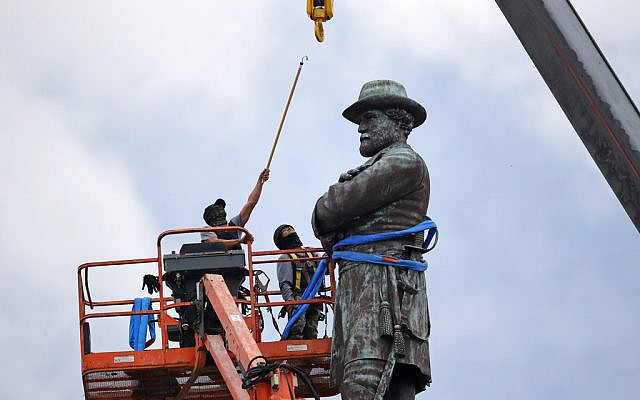 ILLUSTRATIVE: In this Friday, May 19, 2017, file photo, workers prepare to take down the statue of former Confederate Gen. Robert E. Lee, which stands over 100 feet tall, in Lee Circle in New Orleans. (AP Photo/Gerald Herbert, File)

If it’s been good for anything at all, 2020 has been a year for seeing things more clearly. Living in Richmond, Virginia, the former capital of the Confederacy, I’ve seen how a lie can normalize oppression. A lie can even kill if repeated loudly and frequently enough.

Until recently, Confederate monuments were among my city’s most recognizable landmarks. Most of these were erected in the decades following the Civil War, as part of the so-called “Lost Cause” movement, a propaganda campaign to reassert white supremacy across the South.

The Lost Cause movement deliberately distorted history to disenfranchise, segregate, discriminate against and terrorize Black citizens. Its impact was devastating. One can draw a line from the Lost Cause disinformation campaign to the Jim Crow regime to the indisputable fact that today Richmond is still racially segregated. Richmond’s map of segregation correlates to inequities in everything from income to wealth to educational outcomes to access to healthcare to air and water quality to life expectancy.

One example: COVID-19 has impacted communities of color in Richmond at far greater rates than it has the city’s white residents.

Then, this summer, the unthinkable happened: Amid the uprising for Black lives that sought, above all, to reveal systemic racism in America and the falsehoods and violence which perpetuate it, most of Richmond’s monuments were toppled. And while the most prominent of these icons, the Robert E. Lee monument, still stands, it too is scheduled to be removed.

Tearing down racist idols does not undo the effects of centuries of racial injustice. We have so much more that must be done to achieve justice for all. But this significant, if symbolic, accomplishment reminds us that oppression can thrive only when people assume they are powerless to resist. And tyranny can be opposed by relentlessly and courageously bringing truth to light – surely a lesson for 2020.

I keep thinking back to a trip I made before the pandemic changed all our lives. I traveled to Guatemala with a delegation of rabbis in a fellowship with American Jewish World Service, a leading global human rights group. There, we met with activists who are trying to right some of the wrongs of what’s sometimes called a “civil war,” but was in reality genocide that killed and forcibly displaced indigenous people.

One day there, we met with a human rights law firm that represents survivors of this genocide. The lawyers told us securing justice is difficult because many war criminals continue to dominate Guatemala’s ruling classes. Very few perpetrators are prosecuted for their crimes, and victims rarely win.

Given this, why do victims even bother? Why do these lawyers take on cases? How do they persist for years with small chance of success?

Because, they said, oppression can be fought and even stopped by people who refuse to retreat even one step from demanding truth. Justice can prevail, but only when people recognize that every action, no matter how small, can make a difference.

As I reflect on what I learned in Central America, I think about this turbulent time in our own country. We have a president who has sought to undermine democratic norms, in particular advancing lies about the 2020 election and seeking to overturn the results of a free and fair election. Yet, because of millions of votes and countless small and large acts of resistance, the United States remains a viable, if imperfect, democracy. And the Black Lives Matter movement’s successes this year offer hope that we might reckon with the enduring legacy of our nation’s founding sins.

Still, 2020 has enabled us to see clearly the enduring fragility of our republic and the inequity of our society. It is for times like these that Jewish tradition reminds us that we are not powerless. On the contrary, we can change the world. Things need not remain the way they currently are. And it is precisely when things are most broken that we must remember our ability to repair them.

About the Author
Rabbi Michael Rose Knopf is the spiritual leader of Temple Beth-El in Richmond, Virginia and the author of Thirty Days of Liberation. The views expressed in this article are solely those of the author, and do not necessarily reflect those of his congregation.
Related Topics
Related Posts
Comments