The Blogs
Loolwa Khazzoom
Apply for a Blog
Please note that the posts on The Blogs are contributed by third parties. The opinions, facts and any media content in them are presented solely by the authors, and neither The Times of Israel nor its partners assume any responsibility for them. Please contact us in case of abuse. In case of abuse,
Report this post. 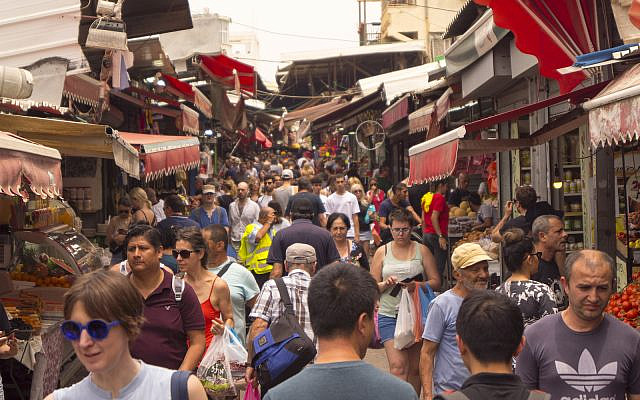 I was speaking with “Rich,” who grew up as a loner and rugged individualist, and we got deep into a conversation about identity: How do we identify ourselves and others? And how do we identify with or in contrast to others?

As part of our lengthy discussion, I mused on how identification with others often has something to do with majority/minority status and even oppositionality – that if we are among the masses who share the same religion, ethnicity, lifestyle, etc, our commonalities are likely to feel unremarkable and fail to spark a connection. If, however, we are among a limited number of people who stand apart from our greater context, we very well may bond over shared “outsider” identities and experiences. Instant community, in fact, often forms on the fringes of society – with that community feel vanishing, once the fringe becomes mainstream.

I poked fun at human nature, laughing about how when I encounter a random Israeli anywhere in the world, we bond immediately, whereas we’ll just walk past each other if we are in Israel. My point was simply that human identification and connection often are contextual; the scenario remains the same, whether using the example of people from a common town, school, profession, or country. Rich, however, glommed onto the Israel example and – in a tone that felt contentious, not curious – asked, “Why are you sold on a team that you have nothing to do with? Israel didn’t even exist 80 years ago.”

Earlier in the conversation, Rich had expressed his wish that people would ask him questions about who he is, instead of trying to fit him into their preconceived notions and categories in their minds. Half an hour later, I was wishing the same thing from him.

From what I have observed, most of the world is brazenly ignorant about Jews, Judaism, and Israel – convinced that they know all there is to know, and therefore, not recognizing the need to question their beliefs. Adding fuel to the fire, racism against Jews is twisted, framing Jews as the rich and all-powerful ones running the whole system, standing in opposition to the poor, oppressed, true victims of racism. Against this backdrop, it is fairly common to encounter negation of and contempt for the Jewish experience, instead of interest in and care about it.

In response, Jewish leaders often attempt to elicit care by touting our collective accomplishments (Cell phones! Natalie Portman!), as well as by reminding people how many millions of Jews were massacred in the Holocaust. But I don’t want people to care because we are innovators, celebrities, or victims. I want people to care because we are human beings. And because caring is the right thing to do.

In particular today, I wanted Rich to care enough to ask me again, but sincerely this time, about why I identify with Israel and Israelis – never mind the fact that I am an Israeli citizen. If he did, I would share with him a 4,000 year family legacy of resilience, memory, faith, and homecoming:

I would tell him how every morning for the past four-plus decades of my life, I have woken up and ritually purified my face and hands – the same way my ancestors did at the Beth Hamiqdash, the holy Temple in Jerusalem, thousands of years ago. I would tell him how I have then taken a towel and faced Jerusalem, drying my face and hands while chanting an ancient prayer thanking G-d for bringing me back to life – the same prayer my ancestors chanted over the course of 2,600 years since the Babylonian empire destroyed the kingdom of Judah (southern Israel), taking my ancestors as captives to the land that is today Iraq.

I would tell him that my ancestors subsequently prayed three times a day, every day over the course of 130 generations, facing Jerusalem and chanting supplications that G-d return us to our homeland – the same prayers that I prayed facing Jerusalem, throughout my childhood and young adult life; that every day, at every meal, for as many generations, my ancestors dipped bread into salt, commemorating the destruction of the Beth Hamiqdash, as I also did for decades.

And I would tell him that in 1950, my entire paternal family returned to Israel from Iraq on an airplane, fulfilling the ancient prophecy that we would return from Babylon to Zion “on the wings of eagles.”

Never mind the fact that there has always, since time immemorial, been a Jewish presence on the land of Israel, above and beyond the reign of the Israelite kingdoms, and that over the course of history, there have been numerous Jewish uprisings attempting to reclaim our homeland, following its conquest by foreign invaders. Israel has been the living, breathing locus of Jewish consciousness, from the beginning of our people 4,000 years ago through today.

We are actually called Jews (Yehudim) because we hail from the kingdom of Judah (Yehuda), the southern region of ancient Israel. Unlike other faiths, Judaism is not the sum total of a religion, though religion is part of it. Judaism is a nation in a knapsack, the portable encapsulation of a land, language, law, culture, religion, and history, an ingenious way to preserve and pass on a comprehensive national identity while in perpetual transit as an unwelcome outsider. Don’t believe me? Go ahead and read the Torah (Jewish Bible). It’s largely about things like what to do when your ox and someone else’s ox get mixed up. That’s civil law, not theology.

Which all goes to say, why am I sold on Team Israel? Because it has everything to do with me. It is the unbroken thread connecting me to every single person who came before me – from the nomadic tribe of Israel that wandered the stretch from the Red Sea to the Jordan River, to my 80-plus-year-old aunts and uncles living in apartments throughout urban Tel Aviv. It is the land where I can feel my footsteps echo those of my grandparents’ grandparents’ grandparents’… grandparents; where I can touch the very same Jerusalem stone that they touched; and where I feel rooted in the earth as I dance, in a deep and timeliness connection I never felt anywhere else, no matter how long I lived there.

It is the place where I moved after 30-some years of living in the United States, only to discover that the personality characteristics that always made me stick out in America – the way I voiced my opinion, laughed with my head thrown back, dove into heated arguments, and intervened in what was considered other people’s business – were precisely what made me fit in in Israel. It’s like I had entered my gene pool, with doppelgangers everywhere.

So no, I don’t strike up a conversation with every Israeli I encounter while in Israel; that simply would be too overwhelming, as well as slightly ridiculous (“Oh, you’re Israeli? Me too!”), but I definitely feel an overall connection – a shared consciousness, history, and destiny, even personal way of communicating and walking through the world – that I do not feel with random Americans in the United States, despite my being an open-hearted and open-minded individual.

Interestingly, the whole conversation with Rich began in response to his experience as a child at a predominantly white school, where a teacher referred to him as “the black kid in the corner.” He had no problem being the only black kid in the class, he said. He simply did not want his skin color being used as the sum total of his identity, effectively obliterating all his other characteristics. In my conversation with Rich, meanwhile, I did not want my deep relationship to Israel to be disregarded.

So perhaps the core issue of identity is that people take the time to learn how we identify ourselves and then refer to us in that way, honoring not only some aspect of who we are, but also our relationship to that aspect. Not only do we all have a multiplicity of identities, but each of those identities in turn can have any variation of meanings. The only way to discover what they are is to ask with an open mind and a caring heart.

About the Author
Loolwa Khazzoom is the founder of Iraqis in Pajamas (IraqisInPajamas.com), a band combining ancient Iraqi Jewish prayers with original punk rock, singing in Judeo-Arabic, Hebrew, and English. Songs are about healing and transformation, on the individual and collective levels, addressing topics as varied as cancer, domestic violence, mental illness, national exile, family caregiving, and street harassment. Loolwa's work has been featured in top media including The New York Times, Rolling Stone, Marie Claire, CNN, and The Washington Post. From 1990-2010, she served as a pioneering Jewish multicultural educator, offering programs at Jewish community institutes throughout the United States and Israel. She is the editor of The Flying Camel: Essays on Identity by Women of North African and Middle Eastern Heritage, and she is the author of Consequence: Beyond Resisting Rape. Find out more at loolwa.com.
Related Topics
Related Posts
Comments