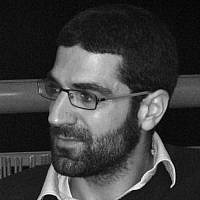 The Blogs
Itai Zaken-Levi
Apply for a Blog
Advertisement
Please note that the posts on The Blogs are contributed by third parties. The opinions, facts and any media content in them are presented solely by the authors, and neither The Times of Israel nor its partners assume any responsibility for them. Please contact us in case of abuse. In case of abuse,
Report this post.

How would you react if you would introduce yourself and your origins in a casual conversation in a foreign country, to a stranger, and the first reaction you get is: “I hate you! I hate Israel! I hate Israelis!” I know it sounds delusional, but it’s not.

That is the response I got a few days ago in the Mile End neighborhood of Montreal, where I live.

At a café in the city, I met a man around my age, carrying books and notebooks, the same way I was.

When I introduced myself as Itai from Israel, and he introduced himself as a Palestinian refugees (who left Israel (Palestine) at age 11), his first reaction was the words I wrote above: “I hate you, Israel and Israelis.”

My emotions roiled inside me and I didn’t really know exactly what I was feeling, but something drove me to disconnect from my emotions and conduct a conversation with the man.

I won’t relate all the details of the conversation, which unexpectedly took an hour. But I had to listen and then speak about everything that is going on between us and the economic situation. I have to note that I wanted to have a conversation on matters of literature, poetry and writing. But reality overpowers all desire.

Sometimes, the cosmos puts you into all sorts of situations and you have to realize what you can learn from that situation, which is not part of your everyday life.

The main points of the conversation were as follows, presented in his point of view:

Israel is the one who bears sole responsibility for the complex situations in Egypt, Syria and Lebanon.

He doesn’t understand why we, as a Jewish nation, treat the Arabs so heinously, when Islam, throughout the ages, was always a warm home for the persecuted Jewish nation.

That America and Britain are exclusively responsible for the situation in the Middle East.
That Israeli society is in such a terrible state.

(If there is something that a stranger cannot tell you, it is that your house is a mess, whether it is or it isn’t, because it’s your house!)

Now I have to write what was going through my mind the whole time, as I bit my lips and tried to understand, although I did not agree—far from it…But I was trying to understand the paradoxical situation unfolding before me.

Of course we agreed to disagree. And the chasm between our worldviews was bottomless. I had a very clear perception from the beginning of the opposing worldview, but suddenly I had to confront it face to face. The ignorance, the hatred! Until now I was fully aware of their existence, and even knew they are all over, but could not discern them on the outside. Now, they were unveiled the moment he began to speak.

Is this the ideal that this nation promotes? Distortion of history? A lack of initiative for their own lives? They blame us for everything. I’m embarrassed to say this, very regretfully, but how can you help someone who doesn’t want to help himself?! How can you conduct a dialog with a man who adamantly refuses to contain himself as an individual, as a society, as a nation? How?

I managed to restrain myself and conducted a conversation with him that left me very emotional. Only on the train on the way to a party in the Jewish community—how ironic—did I understand everything I had bottled up inside. The anger and frustration all came out, over the obtuseness! The ignorance! About the fact that there are entire generations being raised on distorted facts. About the fact that they have shackled themselves in wretchedness! That they don’t help themselves, and thus, they perceive themselves as the victims of mankind.

This was doubly the case with this man, who hadn’t visited Israel (Palestine) since the age of 11…and received a Western upbringing, and Western culture. But he has found himself a calling in life: being a miserable wretch. To belong to the minority! Yes, to be a minority among a billion Muslims…And that’s what marred my feelings: the lack of a desire to push yourself towards the light, and not to live in the darkness.

I want to live in a world where I live with everyone, without being judgmental. I don’t want to mix into another’s life. I want each person to have the freedom to be what he wants, without obstacles, and primarily without cold, calculated judgment. And mostly, I want to give people the chance to come to terms with themselves on their way to achieving inner peace; they should not have to follow someone else’s ideology blindly.

I have no solution, and my heart, as a Jew in this world, will always beat strongly, and will ask questions all the time relating to life and people and our place in this universe, which seems to be rapidly changing. Views that were ethical and normative until now have suddenly become foreign. So perhaps we have to keep our truth deep inside the safe of our souls

About the Author
A native of Jerusalem and an artistic carpenter by profession; He has spent the last decade traveling the world, writing prose and poetry for small groups about his experiences as a wandering Jew, on subjects that are truly important to him: a Jewish identity, Israel, philosophy and other topics; He is a big believer in the human soul and its freedom. He aspires to publish his writings and to grow old surrounded by stacks of books in front of a fireplace.
Comments