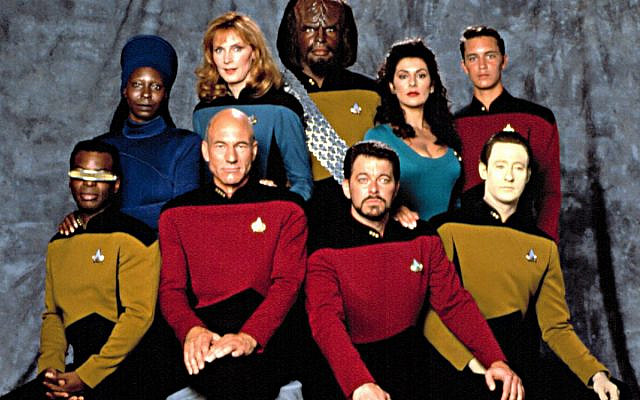 The cast of Star Trek: The Next Generation. (promotional poster)

One of the positive outcomes of more than a year in COVID isolation was my newfound interest in Star Trek. As pandemic boredom settled in, my wife — a longtime fan — wisely saw and seized an opportunity to get me to immerse myself in the show. She suggested the Deep Space Nine series, which contains a number of philosophical and political meditations wrapped in a bunch of extended story arcs about a space station and its crew.

I was rather quickly hooked on the series’ character development, narratives and probing questions about the nature of being human, with the human characters set in complex relief against beings from all over the universe. I know that a TV or Netflix series has me when I constantly talk about it, something my family anticipated and dreaded. (It’s actually my only bad habit.) As we came out of COVID and she suggested we then watch the Star Trek Next Generation series, I readily agreed. The show aired in the ’90s. So far, its first season is badly acted and thematically overblown. The story lines are poorly developed, and I’m not really interested in any of the characters yet. However, I’m being patient because the producers of these multi-season series always took the time to develop the writing and the personalities. Next Gen, as the fans call it, is, I anticipate, a work in progress.

An outstanding exception in this mediocre season is a tense dialogue between Jean Luc Picard, captain of the Starship Enterprise, and Q, the vindictive agent of the Q-Continuum, an intergalactic race that seeks to comprehend and manipulate human nature. By this point in the series, Picard has already defeated Q in a test to see whether human beings are hopelessly corruptible or possess the freedom and the will to improve and grow. Dissatisfied with the prior outcome, Q traps the Enterprise’s crew and attempts to use them as guinea pigs in another test. He wants to see if, when handed unlimited power, humans would abuse it. This would be an overplayed thought experiment were it not for Q’s interchange about Shakespeare with Picard, (who is, BTW, played quite well by Patrick Stewart, a Shakespearean actor by training). They argue about human nature by quoting a famous passage of Hamlet to each other, Hamlet’s sarcastic and ironic appraisal of humankind, for Rosenkrantz and Guilderstern, two young men sent to spy on him by his uncle the murderer:

What a piece of work is a man! How Noble in reason! How infinite in faculty! In form and moving, how express and admirable! In Action, how like an Angel in apprehension, how like a God! The beauty of the world, the paragon of animals — and yet, to me, what is this quintessence of dust? Man delights not me — nor woman neither, though by your smiling you seem to say so. (Hamlet Act II, Scene 2)

Q uses this soliloquy to make his point: human beings truly are a colloquial piece of work, but certainly not a good one. To which Picard responds: “Whatever Hamlet might have said with irony, I say with conviction!” Ever hopeful about human redeemability, the good captain is emphatic that we truly are like an angel or a god, howbeit so imperfectly.

Shakespeare employs Hamlet as a vehicle for examining one of the oldest paradoxes of human thought: that we are simultaneously like angels and perfect examples of dust. There is some speculation that Shakespeare was echoing Psalm 8, an inspired biblical meditation on the nobility and the nothingness of human beings:

When I behold Your heavens, the work of Your fingers, the moon and stars that You set in place,

that You have made him little less than divine, and adorned him with glory and majesty?”

You have made him master over Your handiwork, laying the world at his feet… (Psalm 8:5-7)

The psalmist is astonished that God has invested us with so much greatness among all the earth’s species. In contrast to the grandeur of the vast universe in the starry night sky, we humans are quite low and insignificant. The later rabbis of Jewish tradition take this paradox of human existence and reinterpret it. Notice how they pull the verse from Psalm 8 almost entirely out of context to make a new point about our simultaneous greatness and lowliness:

The ministering angels said to God: “Sovereign of the Universe! ‘What is Man that You have been mindful of him, mortal Man that You have taken note of him?’ (Ps. 5:5) For what purpose did You create these humans who are all trouble?”

God responded to them, “If I hadn’t created human beings, what would have been the purpose of having created ‘Sheep and oxen, all of them’? (Ps. 8:8) What would have been the purpose of creating ‘The fowl of the air and the fish of the sea’? (Ps. 8:9) I am like a king who has a tower filled with good things and no guests with whom to share them. What pleasure does the owner of such a place get from having filled it, when there are no guests?” (Genesis Rabbah 8:6)

The bewilderment of the psalmist, reflecting upon our contradictory status as a species, now becomes the snarky, dismissive warning of the angels, those heavenly immortals. Whereas the psalmist expresses astonishment that we are so great despite being so small, the angels warn God that we weren’t worth the trouble of God creating and maintaining us. They imply that our smallness isn’t in contrast to the greatness of the heavens, it’s in contrast to the perfection that only they in heaven could ever know. Humans, to them aren’t merely insignificant in the great calculus of creation, we’re a worthless, destructive addition to it.

The end of this rabbinic story turns the verses of Psalm 8 that follow into God’s response to the angels. Basically, God tells them, “Look at all these wonderful things I’ve created, all of these animals, but there is no one with which to share them. I’m like a king who has a tower filled with toys, yet no one with whom I can enjoy them! Human beings are my guests in this great tower called the world. I need them here as my companions.”

God’s defense of humankind is hardly as passionate as Captain Picard’s glowingly optimistic appraisal, itself an interpretation of Hamlet’s words. Our sages understood all too well our capacity to be worthless dust as much as to be like the angels, and they reflected that insight in God’s response. However, let’s look closely again at how they thought that God views us: we are beloved guests whom God needs to host because, like the king in that tower, God is lonely and friendless. Perfect guests we are not, nor have we ever been, and there are times when we are, in fact, horrible guests in God’s world. Yet God loves and needs us so much that God is willing to ignore the angels’ otherwise seemingly reasonable argument that we were never worth God’s trouble.

The angels’ argument with God is seductively nihilistic: humankind and its behavior can be so depraved, as to be meaningless and worthless. Our challenge is to not be seduced by such demonic despair dressed in angelic wisdom. In our relationships with the world, with other people and with ourselves, we can emulate God by taking, together with God, that great, faithful leap of love, as we pass, nomadic guests that we are, through this one life and world that God has invited us to enjoy.

About the Author
Dan Ornstein is rabbi at Congregation Ohav Shalom and a writer living in Albany, NY. He is the author of Cain v. Abel: A Jewish Courtroom Drama (Jewish Publication Society, 2020.)
Related Topics
Related Posts
Comments
Advertisement