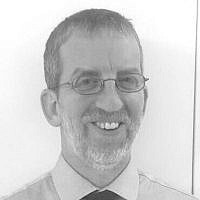 The Blogs
Morris E. Hartstein
Apply for a Blog
Please note that the posts on The Blogs are contributed by third parties. The opinions, facts and any media content in them are presented solely by the authors, and neither The Times of Israel nor its partners assume any responsibility for them. Please contact us in case of abuse. In case of abuse,
Report this post.

In the run up to the most recent election, both Likud and Blue and White parties pledged to bring the remaining thousands of Jews in Ethiopia to Israel very soon. The week before the election, Likud sent several Knesset members to Gondar, Ethiopia where they gave speeches and posed for pictures with the community. Then they flew back, accompanied by 43 fortunate souls who finally realized their dream of being reunited with families in Israel.

I don’t know if the Knesset members had time during their whirlwind trip to observe the approximately 400 malnourished Jewish kids, ages 5 and younger, who receive two stable meals a day in the Jewish compound. Five days a week, SSEJ (ssej.org) provides two stable meals per day to children ages 0-5 suffering from malnutrition. We established the program in 2017 and for the past several months, we have been struggling to figure out how we are going to have enough funds to keep it going. The Jewish Agency, the Joint Distribution Committee and Federations do not participate in this program.

In 2017, with the University of Gondar, we measured the height, weight and upper arm circumference of about 1000 Jewish children ages 5 and under, in the Jewish community in Gondar. We found that nearly 50% of these children suffer from severe chronic malnutrition. This means that they are 2 standard deviations below the mean for height, for weight and weight for height. The World Bank has determined that malnutrition is the single most important predictor of human capital. The long-term fate of these children is being sealed during the most critical period of their lives.

SSEJ’s program has been a huge success. All of the children have demonstrated weight and height gain, approaching the normal for their age. Many have “graduated” from the program. It may be shocking for those of us who live in the west, but the death rate from malnutrition in Ethiopia has been reported to be around 6%. Our onsite pediatrician (1,000 children under five are currently under his care; we lack the funds to help anyone else) has calculated, that according to this rate, over the past 2 years he would have expected 54 children in our group to have died. You read that correctly—54 children would have died. But in fact, none of our children in the program have died.

For the past two weeks, we have wrestled with another potential threat, beyond running out of money. There have been no reported cases of the Corona virus in Ethiopia. However, this just may just be a matter of time. If someone in the Jewish community or one of the children is exposed to Corona, it would necessitate us shutting down the nutrition program. Imagine being a 3 year old in quarantine without a basic amount of food to subsist.

We are currently examining preventive measures that we can enact now. One option is to divide the large group into smaller groups to be fed at separate times. This would require disinfecting the tables between each meal, disinfecting the dishes, finding a supply of detergent, gloves, masks, and possibly thermometers. Another option is converting the program to “take away” only. However, that would limit the type of food we could provide for the kids. Plus, we would lose our ability to monitor who is actually receiving the food. Hopefully, the Jewish Agency and the Jewish Federations will respond positively to SSEJ’s urgent request for assistance in light of the new health menace and the thousands who are at risk.

There is one simple solution to this enormous challenge. If all of these children were brought to Israel as promised, we wouldn’t have to worry about how we will continue to feed them in Gondar. When the government decides to act, it can bring these people here within days, as we have just seen.

While the politicians are currently jockeying to see who can form a government, I hope that whoever succeeds, will immediately act on their pre-election promise to bring the remaining Jews here as soon as possible. With Corona threatening, we are running out of time.

About the Author
Morris E. Hartstein is a Harvard-trained ophthalmic plastic surgeon, director of Ophthalmic Plastic Surgery at Assaf Harofeh Medical Center. He has authored 3 best-selling textbooks in oculoplastic surgery. Dr. Hartstein made aliyah 14 years ago with his wife and 4 kids; they live in Raanana.
Comments