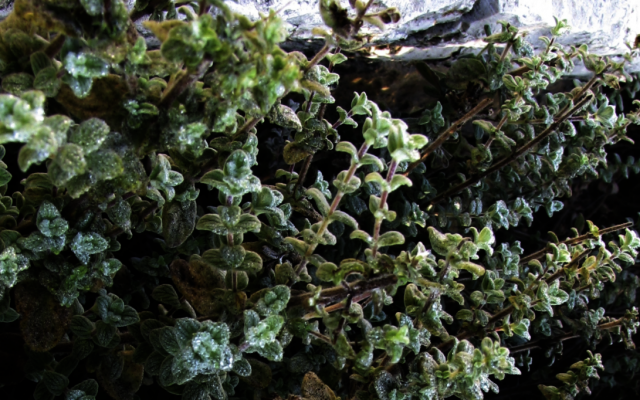 Origanum syriacum, one of the candidates for Biblical hyssop, Wikimedia commons

In the Exodus story, the destroying angel passes over the houses of the Israelites — in Hebrew “pasach al hapetach” — sparing their firstborn, and giving Pesach, the Passover holiday, its name in Hebrew and English. But the angel only “knows” which house to skip because it sees the sheep’s blood smeared on the doorposts and lintels of the some of the entryways.

In Exodus 12:22, Moses tells the Israelites that the way to apply that blood is by using an “agudat eizov” — a bunch of hyssop, which could be dipped into the blood of the korban Pesach like a paintbrush.

Varieties of hyssop grow wild everywhere in the Middle East, which is why hyssop is described in 1 Kings 5:13 as being rooted “in the wall.” The Psalms also describe hyssop as something that purifies (Psalms 51:9), and hyssop was used for that purpose in three rituals: sprinkling blood on a person or house cured from “tsara’at” (leprosy, Leviticus 14:4-6, 14:49-51), preparing the ashes of the red heifer (Numbers 19:6) for removing the impurity of a dead body, and sprinkling those ashes mixed with “living water” on a person who had come in contact with a dead body (Numbers 19:18). All these rituals were used to help a person transition from a state of impurity into a state of purity.

It’s no surprise that hyssop was associated with purification. Hyssop, also known as zaatar in Arabic, is in the mint family, which includes oregano and thyme, and it is used even now as a medicinal herb for digestive parasites. (Commercial zaatar is sometimes made from these other herbs.)

As an herb used for purification, which was such a concern for ancient Israelite society, it needed to be available anywhere and anytime of any year. Hyssop would always be at hand — even in the Shmitah or Sabbatical year, when only species and crops that grow on their own without cultivation could be used. This also means it would have been easy that first Pesach to gather a bunch of wild hyssop for daubing one’s doorframes.

Unlike the other rituals that use hyssop, each of which create a kind of ritual doorway that a person passes through in order to transition from one state to a more pure state, in Egypt the hyssop ritually closed shut a doorway, protecting the firstborn Hebrew slaves inside. The hyssop-blood ritual of Pesach wasn’t a way of changing one’s status, but was rather a sealing of one’s identity.

Shutting oneself in because of a plague is something we all know a bit more about after the past year, and needing to find ways to transition from being in contact with death even more so. Maybe for these reasons, hyssop on the seder plate alongside or in the place of the z’ro’a or shankbone (and maybe even keeping some on your table for the whole Omer) would especially make sense this year.

But the living qualities of hyssop as it grows make it a good symbol for Pesach in other important ways too. Being common and medicinal and growing wild, it can represent the pure and unmanipulated earth, springing to life everywhere. And it can represent the healing that comes from the earth — specifically in the Exodus story, healing that came from uncultivated land, from outside of the Egyptian society and agricultural system that corrupted itself by forcing the Israelites to labor as slaves.

As such, hyssop, so common and so powerful, represents the ideal of what a free Israelite society, a society observing Shmitah, can become: a “kingdom of priests” where slavery and poverty are eliminated, and where every member plays an essential role in healing the world through holiness and justice.

This coming year, our next Sabbatical year, we have good reason, thanks to vaccines, that we may we no longer be shut in by a plague. May we find the strength in liberation to create the society of holiness and justice that hyssop points to.

An earlier version of this column was published by Hazon.

Get the Haggadah of the Inner Seder from neohasid.org (print and Zoom versions) and go deeper into all the ways that the symbols and texts of the haggadah carry us toward liberation. And get neohasid.org’s Omer Counter to help carry you from Pesach liberation all the way to Shavuot and revelation.