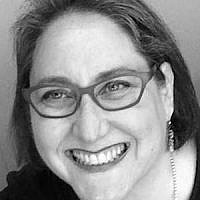 The Blogs
Celeste Aronoff
Apply for a Blog
Please note that the posts on The Blogs are contributed by third parties. The opinions, facts and any media content in them are presented solely by the authors, and neither The Times of Israel nor its partners assume any responsibility for them. Please contact us in case of abuse. In case of abuse,
Report this post.

I almost lost my voice. I have lived in a place of such intensity, so many opinions and ideas and so much religious certainty that after a while, I couldn’t think or speak. Being surrounded by so many people who are so certain of how the world works, how G*d works, what we should be doing, when and how, is, for a sensitive soul, suffocating.

There is a certain threshold of mental stimulation that gets ideas flowing and creativity humming. It’s just enough to get you thinking more deeply and in a more interesting way than you would on your own. It’s exciting when ideas flirt with you, and you flirt back, hoping and waiting to see if something more will develop between you and these new ideas.

But in Jerusalem, ideas aren’t casual. They don’t flirt with you. They stalk you and argue with you and debate with you, engaging with you as aggressively as the people behind the ideas. In Jerusalem, there is no such thing as a simple question. Every question has 70 faces, and every face is more serious and more consequential than the next.

Every question has historical roots, and centuries, if not millennia, of possible answers, all of which are preserved in the Akashic records version of Jewish thought, the past, present, and future all open to us so we can neurotically, and with great intoxication, ask the same questions over and over and over.

It’s easy to get caught up in this argument-as-sport model, thinking that the one in the Beit Midrash who argues the loudest is the smartest, that the one who is most confident is most right, that certainty is a virtue. And the yeshivish havruta model really is sport, in the best and worst sense of the word.

But for me, Truth lives in simplicity and silence. I was happily seduced by full-time learning, feeling invigorated and alive and challenged in ways that gave me a connection to self and community I didn’t know could be. And I love(d) it — deeply. But the noise level around the learning, the never-ending questions and discussions and arguments, became so loud that in order to see, feel, or hear Truth, I had to get quieter and quieter.

The more I dove into the immeasurable depths of Jewish thinking, the more I longed for simple silence and direct encounter with G*d. I needed an escape from words, and time to just be – with G*d and with myself – not asking, not seeking, not wanting, and not knowing.

My meditation has always been of the spiritual me curled up in G*d’s lap, like a child, wrapped in the arms of warmth, love, and belonging, no words needed. And this practice has been my strength in every aspect of my life. When I first encountered the rarefied air of the Beit Midrash and dove into our many different texts, I thought I would find G*d within them. So needing to step away from the noisiness of Judaism to feel the silent presence of G*d has been conflicting and confusing.

I thought the text would take me deeper into covenant with G*d, but no words can do that for me. And I wonder how many others, like myself, go silent when confronted with so many words, yearning for the Divine, and left wondering when they don’t find it.

I am never short of ideas or answers, and I can get pulled into the entertainment and excitement that is pilpul, the back-and-forth of good learning. But to go from information to knowledge, and from knowledge to wisdom, I need the space of silence and solitude, of transcending the limits of my own mind and thinking, and floating in simple being.

About the Author
Celeste Aronoff was born in Brooklyn, grew up in the tranquil suburbs of Kansas, found G*d in the meditative practices of Raja Yoga in India, and found herself and her home in Israel. She has been a spiritual educator and writer for over 30 years, offering personal insight and pointing the way to a life filled with meaning.
Related Topics
Related Posts
Comments