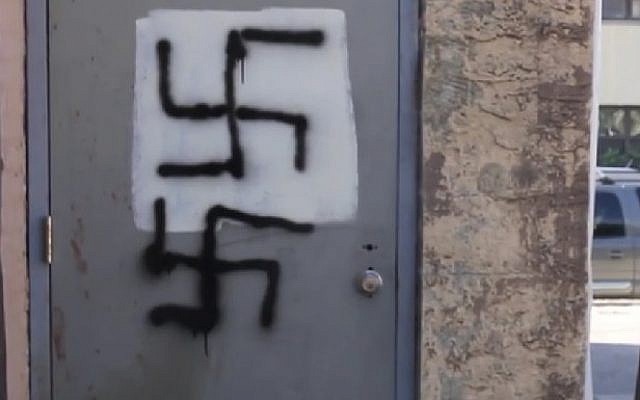 Illustrative: A swastika spray-painted at a playground in Lakewood, New Jersey, August 2016. (APP)

I am a light-skinned Jew.

Because Jews are a people — in many colors — from deep ebony all the way to alabaster — who can trace their DNA to a little strip of land no bigger than a fingernail.

And just as science and genetics back this up,** historically in America we’ve been treated as non-White.

There were “no dogs or Jews allowed” in my grandparents’ generation.

There were quotas limiting the number of Jews allowed in schools in my mom’s generation.

And “Wow you don’t look Jewish” in every generation.

It’s true — we aren’t discriminated against the same way as People of Color.

And I am NOT comparing our experience to the systemic and systematic discrimination and outright persecution that many people continue to face in America to this day.

And it’s true, we DO enjoy White Privilege to a large extent… that is, until people find out we are Jewish and then that can change in a quick slither across the face — whether it’s a joke about how rich we must be, or a comment about how we must not be “fully Jewish” because we don’t have a big nose or dark hair or horns or some bullshit, or “is it true you drink Christian blood.”

And while this is less likely to happen in big cities like LA or NYC, try a small town on a slow day in June and you’ll see it too. It’s real.

I know I haven’t faced outright discrimination — I wasn’t passed over for jobs or schools or organizational membership, although my mom and her parents were.

I know I have it easy.

And I am not looking for sympathy or acceptance or recognition — and to be very clear, I DO NOT identify as a person of color nor would I ever compare my experience to the violence and suffering many continue to suffer to this day.

But I am not White.

I am a light-skinned Jew.

And if you negate my family’s experience as non-whites who were treated as non-whites by Whites, if you deny the discrimination and persecution my people have experienced in America over the years — some systemic, some isolated, but all real and pervasive, then you are erasing our history as Jews in America and there’s a word for that: anti-Semitism.