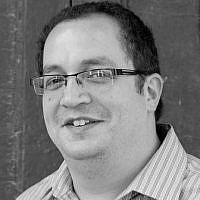 For the past few years when I’d meet a new person they’d ask:

“Why do you quote Mark Twain, Eminem, and Pirkei Avos in the same sentence?”

“Why do you hate Nazis and Eli Dessler?”

Living in a world where labels are of utmost importance, one cannot live in this bifurcated world without a label; everyone must know if I’m in or out, with them or against them. The need for a label is unyielding.

I’m the guy who finds himself quoting Gemara in a business meeting and a Feldheim Holocaust Diaries book in a board meeting. I’m the guy who learns Nach with a chavrusah because I’m not satisfied with the treadmill of Gemara I was kept on in yeshiva, but I do it while sitting bareheaded and reading out the shem hameforash aloud (freaking out my wife in the process).

I bust my ass to send my kids to Hebrew school, going out for risotto with shellfish for business lunch meetings then coming home to do Chumash homework with the kids, practice benching with them, do research on projects such as shechita with them, putting them to bed with Shema while not wearing a yarmulke and then not doing any of those things myself.

I go to friends for a Shabbos, sit politely through the rabbi’s anti-gay drasha in shul, say over a dvar Torah at his meal then get into an argument with him about the existence of God with arguments such as “If Avraham Avinu could discover God at the age of 3 then I can reject Him at the age of 30, don’t give me this naarishkeit.” Real strong argument, also real yeshivish.

I go to Venice for work and immediately seek out the ghetto. The Israeli guard at the shul asks me if I’m shomer Shabbos, I almost feel guilty when I respond to this secular Israeli “No.” And when I start davening, for the first time in a few years, in this beautiful 450 year-old synagogue, I burst out crying in middle of Shemoneh Esrei, something I never did while frum. Then when the poor, bored, American kids behind me turn to each other to ask why the chazzan doesn’t drink the wine after the kiddush he made, giving it, instead, to a kid to drink, I turn around and explain the halacha to them, while their counselors, as ignorant as they, look on half bemusedly and half gratefully. I then join a visiting professor of Judaic Studies for his meal, where we talk Judaism for two hours, and afterwards I join my colleagues for a birthday party at a bar.

So what label to use?

I feel that “OTD” hardly does justice. Off what derech? The one that prioritizes boys over girls, Gemara over halacha, ignorance over knowledge, institutions over people, form over substance? While I have left that derech, it doesn’t deserve mention in the definition of who I am.

Some have suggested we use the term “maskil”; after all, it’s romantic, it implies intellectual interest! It focuses on the brain rather than…well all the carnal things we think about when we think about the degenerate OTD. The problem is, though, that I’m no Mendel Lefin (although I have read Ben Franklin’s autobiography).

When I consider all the Jewish labels that I could self-apply I find myself dissatisfied with all of them:

So I find myself right back where I started: I remain a yeshiva bochur at heart and probably will be for life, but I don’t believe in God or practice anything. I guess I’ll have to content myself with the label Non-Observant Yeshivish.

About the Author
Eli Mandel is a graduate of Pupa cheder in Monsey, N.Y., the Telz yeshiva and Fairleigh Dickinson University. He is now recovering from ultra-Orthodoxy with his wife and four daughters in Philadelphia, PA. When he's not riding his motorcycle, he works to improve financial well-being through proper budgeting as a form of tikkun olam.
Comments