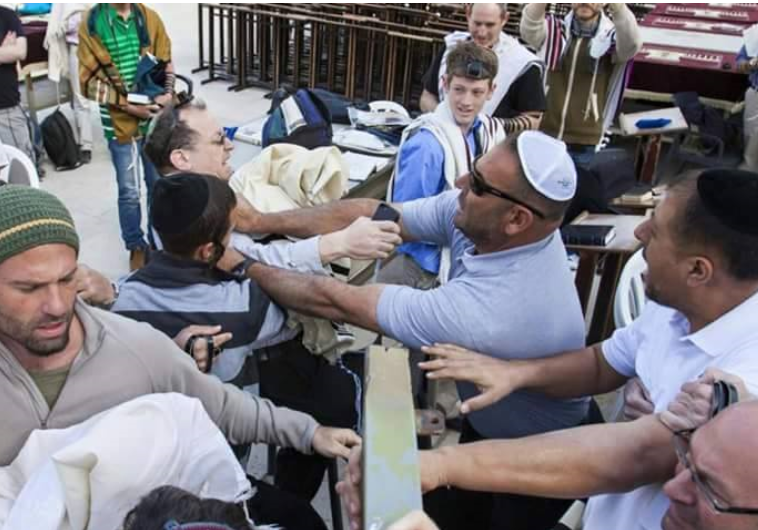 The cry for freedom of expression following the deadly attack on the Paris offices of Charlie Hebdo back in January, need now be echoed by all who believe in freedom of religion following the attack on a Charlie of our own here in Jerusalem. While this is the responsibility of Jews everywhere, those living in the United States have an immediate and impactful way of making their voices heard.

I am Charlie. Well, more accurately, I know Charlie. I’d like to think that in some small measure I might even have been a part of the journey that led to his being accosted and hurt by Western Wall ushers last week after passing a Torah scroll to a women’s prayer group on Rosh Hodesh Iyyar, and then – adding insult to injury – being charged by the police with “disturbing the public order.”

When we spoke a few days ago, he was gallant enough to grant me that pleasure of pride – not in his suffering, of course, but in his courage to act upon his convictions.

Which takes me back to 1984, when Charlie Kalech, a 17 year old 11th-grader at Akiba Hebrew Academy in Philadelphia, spent a semester studying in Israel on the Tichon Ramah Yerushalayim program I was directing. In the course of our recent conversation, he reminded me that he and his classmates were harassed when I took them to the Wall on Shavuot to study and pray in an egalitarian minyan – a memory, he said, which has affected him ever since. Meaning that the struggle for non-Orthodox access to this site, so evocative and symbolic in the Jewish psyche, has been going on at least since then.

Indeed, in the intervening 30 years, partial solutions have been offered for those of us who require a place to pray outside the parameters of normative Orthodox practice. In 2004, an area under Robinson’s Arch at the southern end of the Western Wall, known since as the Kotel Masorti, was designated for egalitarian prayer. And in 2013, under the leadership of Jewish Agency chairman Natan Sharansky, a section of the Kotel not far from the traditional Western Wall plaza but cut off from it was opened for those wishing to worship in accordance with their own understandings of our tradition.

But with all the good will reflected in the creation of these venues, they have not ameliorated the reality in which the non-Orthodox streams of Judaism have been delegitimized in the Jewish state – the only democracy, and one of the only countries in which Jews live, where it is illegal for non-Orthodox rabbis to perform weddings and where their conversions are not recognized.

While some progress had been made in matters of religion and state over the past couple of years, the results of Israel’s recent elections all but guarantee that those achievements will be negated as a consequence of the inclusion of the ultra-Orthodox in the government coalition presently in formation.

While those of us in Israel can continue protesting, the reality is that this struggle for religious freedom in the Jewish state is the joint responsibility of Jews everywhere. Together we must be adamant in advising PM Netanyahu that he can’t expect the Arab world to recognize Israel as the nation state of the Jewish people, if he is not prepared to take the necessary steps to ensure that the Jewish people – in its entirety – can feel at home here as well. The prime minister has repeatedly stated that he sees world Jewry as a strategic asset of the State of Israel; it is one he can ill-afford to squander in these particularly perilous times.

On his Facebook page, Charlie has proposed one way to get that message across. “Jews in the Diaspora need to speak up loud and clear that the Jewish State is for all Jews and for all streams of Judaism,” he wrote. “Right now you have the perfect opportunity to act. Help those of us living here create a pluralistic, inclusive society that recognizes non-Orthodox rabbis, conversions, and marriages by voting for MERCAZ in the current elections for the World Zionist Congress. Only Diaspora Jews can vote. I cannot! I need your help!”

The election Charlie is referring to, currently taking place in the United States, will ultimately determine how hundreds of millions of dollars will be spent by the Jewish Agency, KKL-JNF and the World Zionist Organization, much of it on projects related directly to the nature of the Jewish state we are in the process of creating. “The man who did this to me,” Charlie goes on, explaining his head injury, “is paid by the State for ‘safeguarding’ the sanctity of the site. It’s time to increase funding for religious freedom instead of paying thugs to curtail it. Next Rosh Hodesh let me know that you are with me.”

Full disclosure: as the international vice president of MERCAZ Olami I couldn’t agree with him more. As vice chairman of the World Zionist Organization I just care that you vote, whatever your vision of Israel. To make your voice heard, go to www.myvoteourisrael.com. Do it now. Voting ends April 30.

I am Charlie. Are you?