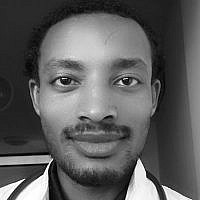 The Blogs
Masresha Dessie
Apply for a Blog
Advertisement
Please note that the posts on The Blogs are contributed by third parties. The opinions, facts and any media content in them are presented solely by the authors, and neither The Times of Israel nor its partners assume any responsibility for them. Please contact us in case of abuse. In case of abuse,
Report this post. 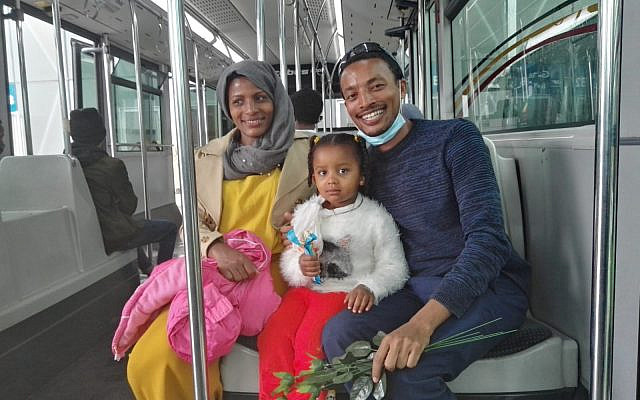 (Masresha Dessie and his family, courtesy of the author)

My name is Masresha Dessie, I am an Ethiopian Jew, and I made aliyah in March 2019. I grew up surrounded by antisemitic and pan-African ideologies. My family moved from our village of Dengal in the region of Gondar to Addis Ababa when I was four years old. My father, may his memory be a blessing, passed away during my childhood. He served as a policeman in our village and kept a library of numerous books that made me and my siblings into the people we are today. My mother dedicated her life to her children, and after our father’s passing earned the sole income of our household by doing embroidery work.

Today my elder brother studies mechanical engineering in Haifa, my younger sister studies law and my younger brother wants to pursue a degree in computer science. Despite many obstacles, I persevered, prioritized my education, and succeeded in becoming a medical doctor.

Growing up in Ethiopia during the summers we are expected to work and help support our families. In 2009 I was teaching at the Siket Academy and met my future wife, Beza, who also taught mathematics. After sixteen years of intense study, she became an accountant. Her father, may his memory be a blessing, passed away during her childhood. Beza’s mother is not Jewish and does not approve of my wife’s close ties with Judaism and the Jewish people. After seven years of wonderful friendship, we decided to get married. Together we had a daughter, now four years old.

For nearly two decades, I along with countless other Jews inhabited the Jewish camps, destitute and desperate, waiting to receive permission to make aliyah. My father’s family made aliyah through Sudan in the 90s. My mother’s family made aliyah in the 90s as well. Her parents made aliyah in 2001. In 2004, we received permission to come to Israel after completing the pre-conditions, including interviews and vaccinations. We sold what we had and prepared to fly to our dream but were denied for an unknown reason. My elder brother made his aliyah in 2012.

I was left as the sole caretaker of my beloved mother and two younger siblings. My mother suffers from chronic rheumatic arthritis and ocular muscle strain due to years of embroidery. After fifteen years, at long last, our request was granted, yet I was forced to leave my wife and young daughter behind. This was the turning point for my family’s current and distressing predicament. I decided to save my mother first and make aliyah with her according to the 2004 list of potential Ethiopian olim, where I am registered as single with no children. I have submitted all the required documents to bring my wife and daughter to Israel after my aliyah but my application has been denied again and again. Two and a half years have since passed.

The Ministry of the Interior denies my family’s natural born right to live in our homeland as Jews. Unfortunately, I lack the means and power to deal with this abusive and discriminatory system. In Israel, the life of an Ethiopian Jew is considered to be less in almost every way. It is absurd that the same racist approach adopted more than 30 years ago is still ingrained in Israeli society today and goes so far as to separate a man from his family.

This is in addition to more general issues that years later still have not been solved like severe language barriers, lack of proper medical knowledge specifically concerning Ethiopians, and inadequate housing. In this country, the complex question of Jewish identity is determined via impersonal, black and white bureaucratic procedures and not on a case-by-case basis. It is not based on what you know, it is based solely on what you can prove with official pieces of paper that may be impossible to obtain. I even requested a student visa for my wife so that she might pursue a master’s program at Bar-Ilan, but this too was rejected.

Today, I am a proud speaker of the Hebrew language that enables me to study the Torah, and I have even gotten the opportunity to study Talmud at Yeshivat Or Vishua in Haifa. Yet, what are the gifts of the Holy Land worth if I cannot share them with my loved ones?

In these years of torture, I have just barely tolerated being away from my family. Even though I have dedicated my entire life to reaching this Promised Land, it would seem that no matter what I do or how much I achieve, my family and I will always be under suspicion. Moreover, the separation from my wife has completely prevented any possibility of further growth for our family. Even if it were possible, I could not allow myself to bring new children into this painful situation.

I believe that, especially in the worst of times, our focus must be on doing all that we can to repair the world. These past few years have been challenging for everyone. Due to the COVID-19 pandemic, I was only able to visit my family twice in the last two and a half years. In my current situation, I sometimes feel like humanity and sympathy have all but abandoned the earth. Israeli government personnel do not show care commensurate with the situation; to me they are robots who only know how to follow orders. It would appear that the Jewish Agency’s singular interest is to appear to represent the state, without any true concern for the people the agency is supposed to help.

You could invest all your time and effort in studying, earning a degree, collecting all the right paperwork to make your case as a Jew, but that will still not be enough. Above all, there are not many outside the Ethiopian community who are willing to speak out against these evils that plague us. Most prefer to stay silent and watch our suffering from the comfort of their homes. Maybe they offer prayers but not actions.

I am not here to criticize the world’s worsening trend of corruption and darkness. I believe that, especially in the worst of times, our focus must be on doing all that we can to repair the world. I am here issuing a call to action to all my Jewish brothers and sisters around the world.

Like that of the half shekel, about which we read in the ki tissa Torah portion, every Jew should bring his or her own halves to make something whole together for the sake of the community. I ask the Jewish world to place significant and historic pressure on the Israeli government to reunite me with my other half, my dear wife and child. The smallest spark of light in darkness is a miracle, like the hidden light of creation that came from the abyss of nothingness. Please help me to shine a light on my family’s story so that we can take part in the joys of the Promised Land together.

About the Author
Dessie is a general practitioner from Ethiopia with two and half years of experience. He is currently obtaining a specialization in cardiac surgery here in Israel.
Related Topics
Related Posts
Comments