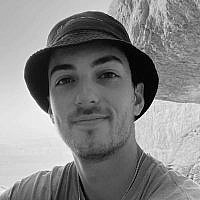 The Blogs
Jonny Maxwell
Apply for a Blog
Advertisement
Please note that the posts on The Blogs are contributed by third parties. The opinions, facts and any media content in them are presented solely by the authors, and neither The Times of Israel nor its partners assume any responsibility for them. Please contact us in case of abuse. In case of abuse,
Report this post. 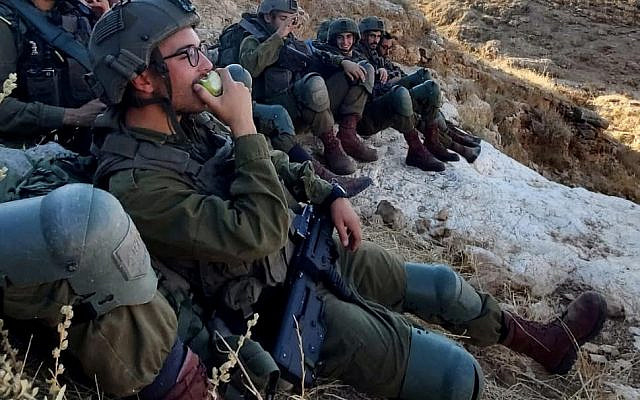 Somewhere in Samaria, 2022. (provided by author)

“We stand firmly with the Jewish state and reaffirm the unbreakable bond between the United States and Israel.”

If you care about Israel, follow politics, or even pay attention to the news, you have probably heard declarations like these:

“The only democracy in the Middle East.”

“A beacon of Western and American values.”

We hear these AIPAC (American Israel Public Affairs Committee) slogans from Democrats and Republicans, Jews and non-Jews. It’s almost become expected for politicians to deliver these well-worded and warm statements when they are running for office.

While cheesy and sometimes, unfortunately, empty, I’ve thought a lot about these statements and this relationship between two nations. America and Israel. I am at the center of this love story.

I was born in Ohio, was active in AIPAC and pro-Israel groups in college, and made aliyah (moved to Israel) after graduation. I then enlisted in the Israel Defense Forces where I currently serve as a lone soldier (my parents don’t live in Israel) in the Nahal Infantry Brigade.

I am now an American Israeli. Or Israeli American? I hold two passports and enjoy the benefits and burdens of both nations. I can vote in Israeli elections and pay Israeli taxes. I serve in the Israeli military. Shouldn’t that make me… Israeli?

I am, yet, at the same time, unable to shed the influence of the first 22 years of my life in the United States- nor do I want to. I have learned an incredible amount of Hebrew in my 2 years living in Israel; however, I still have a thick American accent.

Moving to Israel from America, for idealistic and Zionist reasons, is central to my identity in the IDF. And that tendency to speak English and stay close to Americans is exactly what I wanted to avoid before I moved to Israel.

I remember when I started to tell people about my plans to make aliyah and join the IDF. Many people told me about their American relatives or friends that also made aliyah recently- that some even live in neighborhoods where everyone speaks English and is from the States.

I would smile and say thank you but internally I would scoff.

“What’s the point of moving to Israel if you are just going to be with Americans? I don’t want to be an American in Israel, I want to be an Israeli!”

Through all the hardships in the army, and after long weeks on base, I found nothing more comforting than being around my American friends- even if I didn’t want to admit it.

And from this longing for Americans, I have strengthened my identity as an American citizen and patriot. In some ways, I feel more American in Israel than I ever did in America.

The American flag patch on my military helmet definitely helps. But my reinvigorated appreciation for America does not come at the expense of my Israeli identity. They are strengthened, together.

On the other side of that helmet is an Israeli flag. And between those two flags is the brain of someone who decided to run away from everything familiar in Columbus, Ohio and join the army in Israel.

Being a lone soldier in the IDF means that I can visit my parents for one month every year during my service. I just traveled to America in late August for my month with my family and friends in Columbus.

I realized in America just how Israeli I have become. I felt louder, impatient with lines, more outgoing.

But it also felt weird to see some of the things that I grew up with- the size of every product, Walmart, squirrels, corn fields.

I would even occasionally find myself thinking in Hebrew. America became my “Old Country.” And sometimes, what’s old is good.

I had an incredible vacation and spent time with people that I love. But unfortunately, my Babushka (grandmother) has not been doing well. She has brittle bones and has been to the hospital six times this year alone due to breaks. This puts in her an agonizing amount of pain.

Much of my time in America was spent visiting her. Whether at the hospital itself or a rehab clinic, I would come see my Babushka. These medical facilities are usually set up the same way. There’s the hospital bed, some medical equipment, and next to it all there’s usually a singular chair. So I would come, sit in that chair, and talk to her- or, rather, listen to her do the talking.

For those of you that are familiar with my blog, you would know that my Babushka is a Holocaust survivor. You would also know that most of our conversations revolve around this reality. She’s not necessarily vocal about her tragedies to others, but I was always interested. This is one of the reasons why I decided to join the IDF.

I made a video about her life when I was in High School. She narrated her story and shared family pictures. In college, I wrote an 80-page thesis on her story and the Kamianets-Podolsky Massacre during the Holocaust.

I’ve learned a lot about her life. She will sometimes forget which stories she has told me but that’s ok. I’ll sit in that chair as she tells me the same story for the fourth or fifth time. The decade could be anything from the 30s to the present. She’ll tell me about things both happy and sad.

About a Nazi breaking a little girl’s arm and about my Dedushka (grandfather) surprising her with jewelry. About relatives that were murdered young and relatives that died old.

One thing that was always clear to me from her stories is her love of both Israel and America. My grandparents moved from Ukraine to Israel in 1973. While they only lived there for 2 years before immigrating to America, they were lifelong Zionists.

They remained patriots of both countries- and they believed in the American Dream. My grandparents grew up poor, malnourished, and sometimes homeless. They literally grew up during the Holocaust.

They were able to make it to America, start a business, and buy a home. This guiding ideal, the American Dream, is criticized today. People say that it doesn’t exist anymore and some even say that it never existed.

Does the American Dream exist? I don’t know if that is a question that can fully be answered. But to my family, to my grandparents, it did. During my time in the IDF and visiting back in the US, I have understood just how important American values and the founding principles are: liberty, freedom from tyranny, independence, self-determination, freedom of speech.

They are what provided my grandparents and other Holocaust survivors with the opportunity to build a better future for their children. They have allowed people to escape persecution and become their own masters.

These values are also what binds the United States and Israel. Unlike other countries where relations are based on mutual benefit, the American-Israeli relationship is built on values.

Those AIPAC slogans, while indeed slogans, are true. The American desire for freedom mirrors the Israeli desire for self-determination. Yes, America provides financial aid to Israel and Israel provides American influence in the Middle East, but the greatest asset of this relationship is the moral foundation of our partnership.

It’s not just the politicians that benefit; moreover, it’s Holocaust survivors like my Babushka, Moroccan Jews fleeing antisemitic violence, and Americans praying for a more peaceful and just world.

I truly believe, with all of my heart, that the American-Israeli partnership is a force for good. It serves a purpose bigger than ourselves. Our union is not a paper contract between two governments, but rather a common set of values between two peoples.

In America, everyone asked me about Israel. The situation, the military, politics… Many of you reading this thanked me for my service. I really appreciate your gratitude. You support me in my toughest moments. You give me hope for the future of America and Israel.

I talked to Jews and non-Jews about their passion for Israel and it became apparent that support for Israel is an emotional ideal. It is something that transcends politics and comes from your core values. It is unearthed from your meaning of right versus wrong.

Maybe you went there once- on a Birthright trip or with family. Maybe you have never been there at all. Maybe it’s somewhere far away that you speak about in your synagogue or church. Maybe you just think it’s a historical place.

Wherever your passion for Israel comes from, it is something that you can’t help but be passionate about. It’s just the truth. A truth that we hold to be self-evident. I have no other choice but to love Israel. You love your family. No matter what.

Thank you to the millions of Americans and Israelis that love Israel like I do. Together, we are the reason that I am hopeful for the future of both countries. We must, and will, ensure the unbreakable bond between the United States and Israel.

About the Author
Jonny Maxwell is an IDF Lone Soldier in the Nahal Infantry Brigade from Columbus, Ohio. He is the grandson of Holocaust survivors and grapples with the responsibilities this entails every day. He has bachelors degrees in both History and Diplomacy from Miami University. Jonny was a Jewish camp counselor, Hillel President, and is now a combat soldier.
Related Topics
Related Posts