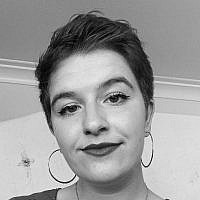 The Blogs
Jillian Axelrod
Apply for a Blog
Please note that the posts on The Blogs are contributed by third parties. The opinions, facts and any media content in them are presented solely by the authors, and neither The Times of Israel nor its partners assume any responsibility for them. Please contact us in case of abuse. In case of abuse,
Report this post. 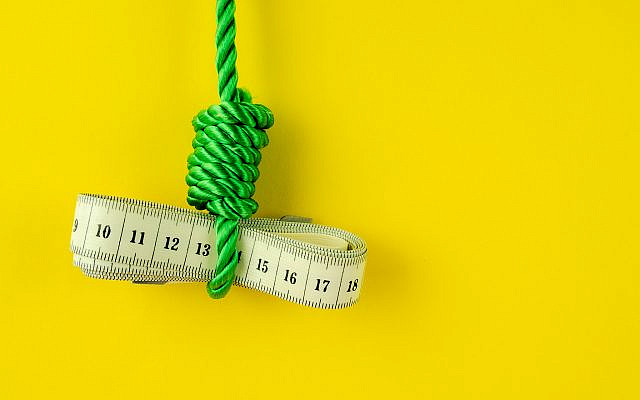 A tape measure hanging by a rope (Getty Images)

At 10 years old, I decided it was time for me to start fasting on Yom Kippur.

While most people don’t start fasting until age 13, I had a craving for spirituality and wanted to do whatever I could to get closer to God. Based on what I’d heard from adults, fasting seemed to be the most extreme, most valuable way that I could connect to God and Judaism.

For a few years I felt the intended effects. During those 25 hours of fasting, I was hyper-aware of my humanity, my fragile mortality and how thin the strings were that tied me (and all of us) to the physical world. Fasting prompted immense gratitude for everything that I had and all of my bodily needs that are fulfilled on other days. My grumbling stomach spurred visceral empathy within me, making me want to take action for those who feel that emptiness on a regular basis. Finally, I felt that fasting was an act of devotion, of depriving myself, in the name of a higher power.

I didn’t look forward to fasting, but I found it to be an incredibly meaningful religious experience that was an integral part of the yearly holiday cycle. But as the day came to a close, I happily broke my fast and moved on with life by the next morning.

But when I was 17 years old, all of that changed. Thanks to the power of diet culture and “fitspo” Instagram, my lifetime love of sports and outdoor activities evolved into an unhealthy interest in “fitness” and “wellness,” code words for compulsive exercise and food restriction. I worked out for hours each day, counted calories and cut out whole food groups. Those mentally and physically dangerous behaviors are not only accepted but condoned by our society. We live in a diet culture that is obsessed with thinness and weight loss, perpetuated by a $72 billion diet industry (in the U.S. alone) that manages to always find new ways for us to hate our bodies.

Recently, a friend sent me an article about Taanit Esther (the Fast of Esther), which directly precedes Purim. This fast honors the three-day fast that Esther and the Jews of Shushan engaged in to prepare for her approaching the king to thwart Haman’s evil plans. However, instead of engaging with the Book of Esther and the bravery of the story’s heroine, this article used Taanit Esther as a segue into promoting the supposed benefits of intermittent fasting. It encouraged readers to learn from Esther’s “wellness secrets” in order to lose weight and “detox the body” all year round. Reading that article made me think about how diet culture has permeated even our most sacred moments.
But I could not blame the author because I spent years believing those very same things.

The peak of my disordered relationship with food came about during my senior year of high school, when I embarked on what would be a three-year stint with intermittent fasting. I did the 16-8 model, where I would allow myself to eat during eight hours of the day while consuming absolutely no calories for the other 16. This program affected everything about my life: meals and social events, my ability to focus, my mental health. Most of all, it led to a daily cycle of restricting and bingeing.

It was around that time in my life that fasting became easier than eating. I looked forward to fasting holidays because they gave me a communally praised excuse to refrain from eating. I could justify what I was already doing: consuming as little as possible to shrink my body to the “ideal” size.

For the first time, I partook in Judaism’s minor fast days, Wikipedia-ing holidays I had never heard of, telling myself that the stories were important enough to me to forego food in their honor. While fasting, I silently felt a sense of accomplishment. I was acutely aware of the grumble in my stomach, and it felt good. My brain focused more on the shrinking of my stomach than the gratitude, the mortality, the connection to God or the words in the siddur (prayer book).

Only looking back am I able to notice what was happening — at the time I believed I was fasting with the same intentions I had as a child. But the practice was tainted by the role of food restriction, negative body image and diet culture in my life.

Years later I discovered the body positivity/body acceptance movement and learned about intuitive eating: a weight-neutral “personal process of honoring health by listening and responding to the direct messages of the body in order to meet your physical and psychological needs.” For the past three years I have been recovering from the restriction mentality and learning to listen to my body’s hunger and fullness cues, living a life in which all foods fit and in which the weight of my body is no longer a concern. I’ve revamped my social media feeds to be only filled with unedited bodies of all shapes and sizes, smashed my scale and read scientific studies debunking diet culture.

I thought I was finally in a good place with food and body image, but then another fast holiday came around. I tried to fast, but found my brain transported back to old, disturbing thoughts that I’d hoped I had left behind long ago. Diet culture had sucked the spirituality out of fasting. I made the decision to break the fast because I could sense my brain spiraling back into an unhealthy place. I was disappointed with myself, but soon learned that I was not alone.

The Facebook group “Intuitive Eating & Body Positivity For Jewish Women” has been a space that I’ve returned to for support. Many of the women there, especially those recovering from eating disorders, acknowledged that diet culture has made fasting dangerous for them. One woman wrote that “it doesn’t feel at all spiritual, it feels like I’m punishing my body.” Others said that fasts trigger other disordered behaviors or thoughts. And all of this was not just internal. Diet talk, the group members explained, is pervasive.

“During the fasts next to chaggim [holidays], you always hear people say ‘good thing we have this to make up for the Yom Tov meals,’” wrote one member.

Others noted the fatphobic nature of conversations surrounding fasts. Given all this, it is not surprising that some appropriate religious fasts as a way to initiate others into intermittent fasting or “detoxing.” But the blame is bigger than individuals, who are themselves victims of the diet industry. Ultimately, Jewish communities, just like any other, can perpetuate the dangers of diet culture and eating disorders.

I still wonder: Is it possible to disentangle fasting from the connotations of weight loss and dieting, and maintain its religious value? In the Facebook group, one woman wondered the same thing: “I find that I cannot fast at this time without separating the two [diet culture and spirituality],” she wrote. “I do hope that someday I can.” She went on to say that she’s engaging with the question as part of her healing: “Even when I come to the point where I can safely fast for religious purposes, I know that there may be some times where I need to go back to not fasting.”

I, too, hope to get to that point, but until then I am comfortable with the knowledge that choosing not to fast is the best decision for my wellbeing. And in the meantime, I hope that our Jewish communities acknowledge and work to end the damaging ways in which diet culture permeates our most sacred practices. A whole lot of people would be grateful for that.

About the Author
Jillian Axelrod is an educator and writer who is passionate about body acceptance, LGBTQ+ rights, and education equity. She recently graduated from Columbia University and the Jewish Theological Seminary, where she majored in Sociology and Jewish Thought.
Related Topics
Related Posts
Comments