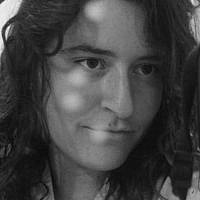 The Blogs
Samantha Blake Alpert
Apply for a Blog
Please note that the posts on The Blogs are contributed by third parties. The opinions, facts and any media content in them are presented solely by the authors, and neither The Times of Israel nor its partners assume any responsibility for them. Please contact us in case of abuse. In case of abuse,
Report this post.

Sitting in my room like a lab rat in a maze; I’m reading articles on lab rats that rescue their kin. I feel like with no friend to open the trap door, surely soon enough I would retrogress like Charly in Flowers for Algernon. I had my pet rabbit Bunny jumping on my head and electrical cords wrapped around me like umbilical cords inside incubators, “matrix” style. 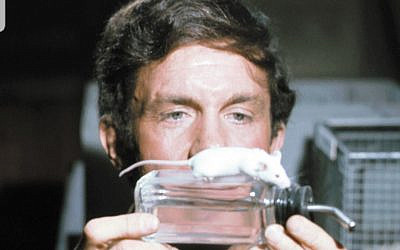 I sent out a text to my friend who I affectionately dubbed “Bear” as Beri seemed to fruity for me. He thinks of himself as some sort of frontiersman. I once thought, Is he a guy who “can’t grow up and get a real job?” Though now during Corona, I certainly changed my mind. I asked if he could ” take me into nature, be my sherpa and all that “. He replied casually,” Nah not really I’m with this chick, though theirs this commune forming in the north”. 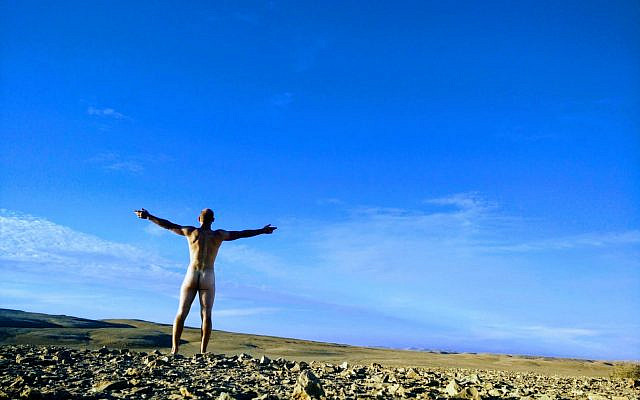 That was it, that’s all the information I needed, a spark lit up inside me and this time not from being electrocuted from a wire my bunny ate. I sent out a message, like a distress call of an animal or maybe in my case a mating call; knowing me, heh. Soon enough I got a message from a guy named Shy that some people,  pronounce like chai tea. I had two hours to pack my things and unpack my own thoughts. I let my understandable fear and paranoia of being caught be masked by heroism, donning a sort of “anonymous hackers group” or “divergent” character. I head off to meet Shy. I was a bag of nerves yet as soon as I saw him flash a wide smile I knew I was going to be okay, and when he grabbed my heavy backpack for me, more than okay. 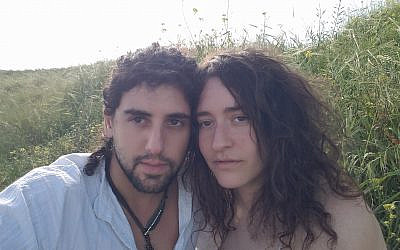 Shy cordially inquired ” what’s in your bag “?. he pointed to this astronaut looking backpack . ” ani mehashefa,yesh li arnav” I replied mysteriously.  Only on the way there did I decide to take him out much to his shock and delight. ” I thought you were talking about a plushie like a weirdo “, he let out. Bonding on the way there over our mutual love of animals and boxing. He shared with me his intent on adopting a baby husky, once we were up north. 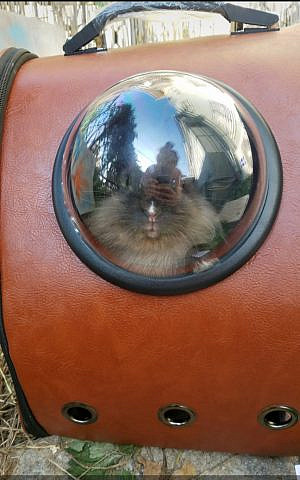 We were stalled when trying to convince taxi drivers to shuttle us. I joked  ” I should pretend I’m a minor …oh jeez mister I’m only 16 “. ” you don’t look 16 “, he retorted . ” okay, okay I’ll pretend I am mentally handicapped “, I cracked. (I feel like that’s where everyone in TLV is headed quarantined in their rooms, four white walls enclosing in on them)  . I let my tongue loll out and wheeze-laughed. Shy joked ” no, no you need to bang your head against the wall “. 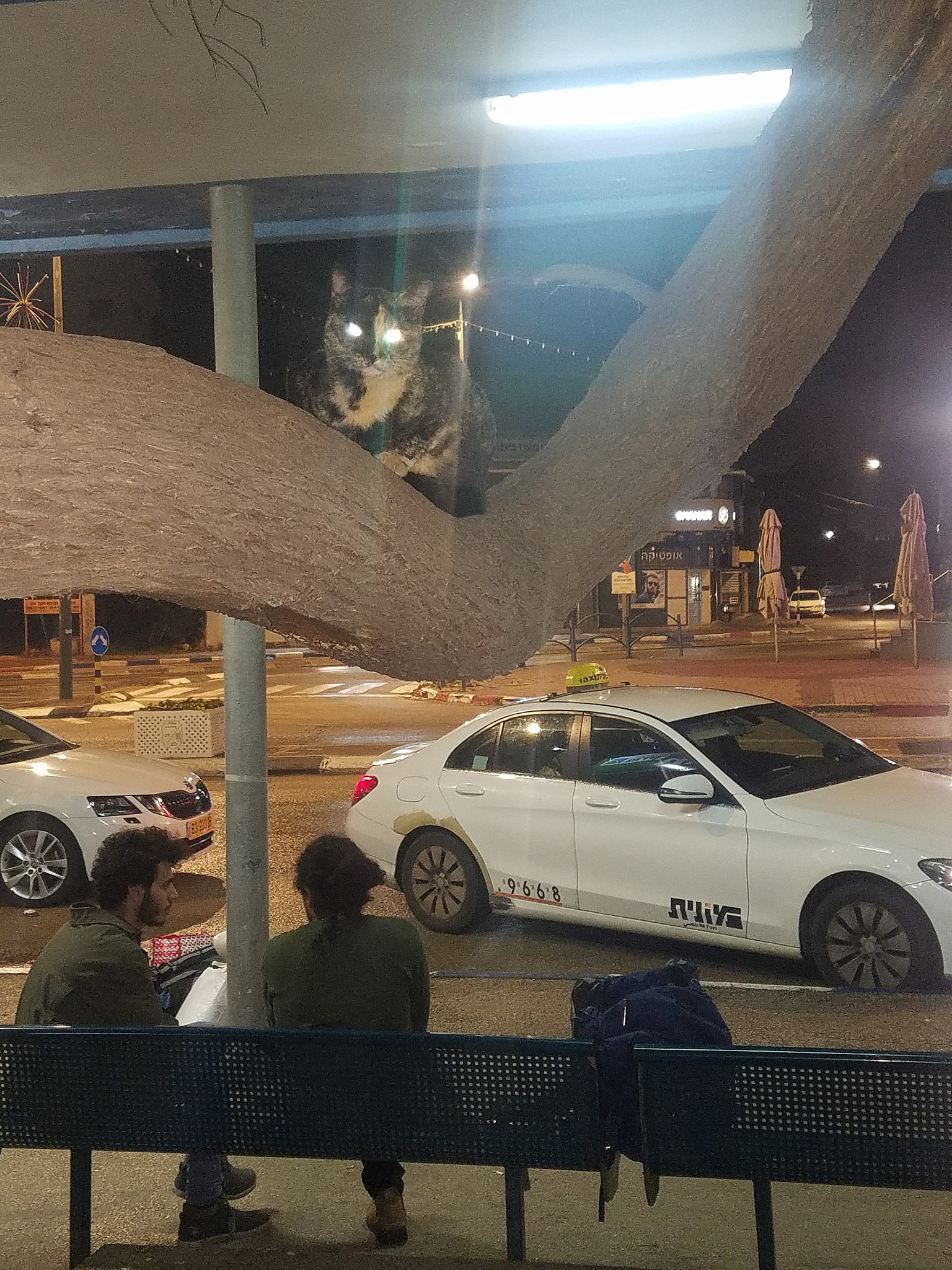 We were picked up in a grocery store by a very tall, beanpole conspicuously bearfoot tan Guy, Lev. I didn’t understand the Hebrew the shopkeepers said to him . so I said,” what did they say no shoes no shirt no service?”. He laughed, “no their fine with it “.On the ride over he seemed to flip out over me eating Bamba, a processed and not rawnola food so I softened the edge and the presumptions with my jokes and my American slang-like-i’m-a-rapper persona. 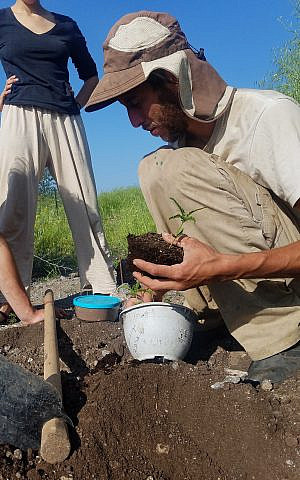 I followed everyone to an enormous tent that reminded me of something out of animal farm.   Michelle, An actress ambled into the tent and with sprite-like energy asked what I was doing here. I reached for her arm and she told me, “Its okay to pet my fuzzy jacket “. I felt a little on guard with her Israeli brusqueness and I with this character I was putting on to defend myself. 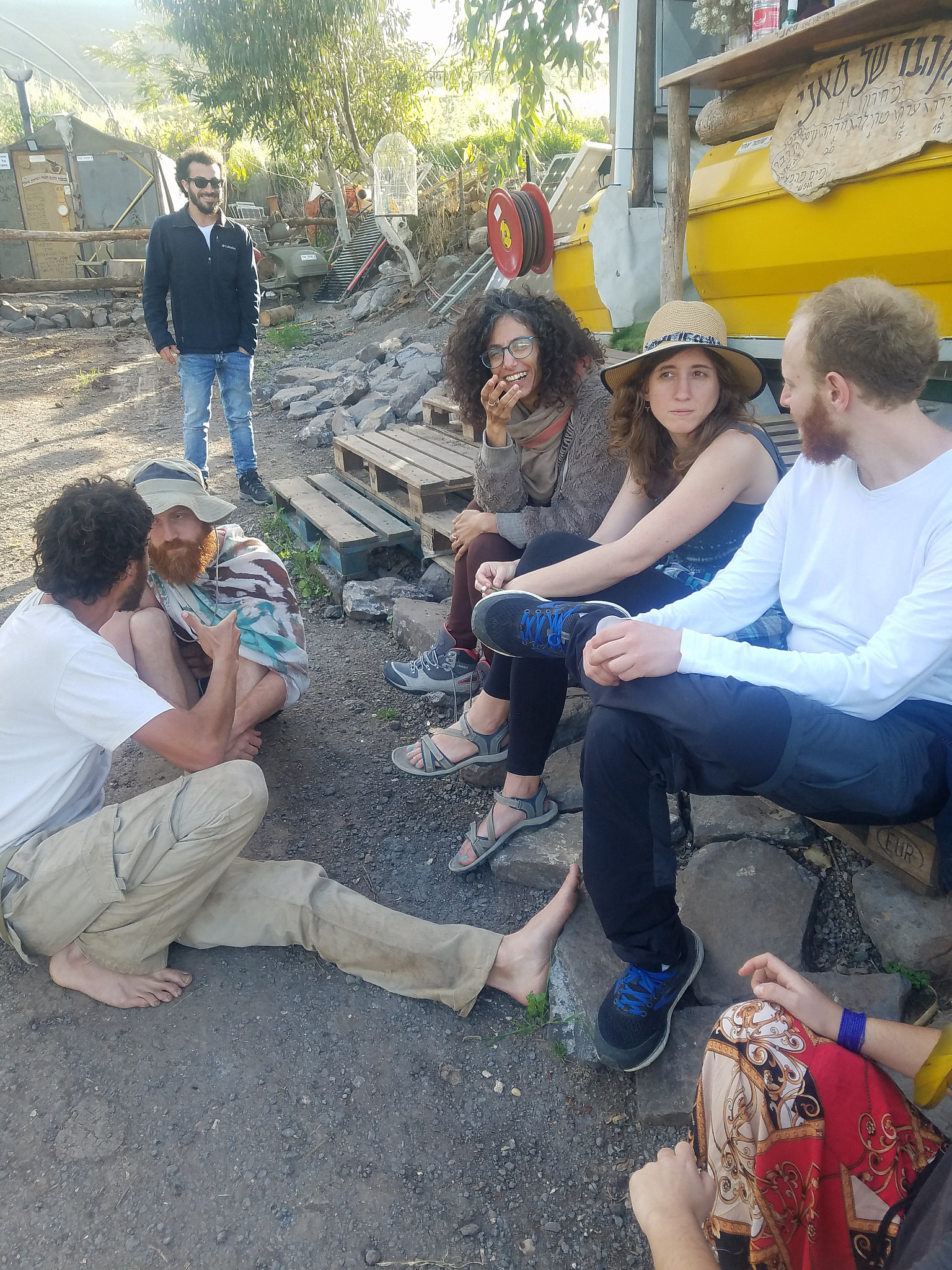 The setup of the “salon” was barren. I seated myself on a massage table turned sofa, the wind driving me closer to acclimate to the warmth of those around me. Shy buried his head in my lap, as I tossled his wild locks and stroked Elaine’s hair. I renamed Michelle, “Elaine” as we thought of ourselves as sienfield characters. I noticed Her tresses felt more alive as if this exposed root-like tendril of hair, where a nerve and I was checking her pulse. Makes sense as theirs a theory Native Americans kept their hair long, an extra sense to notice approaching danger. Elaine told me her hair was like this due to her “no-poo movement “. I mentioned Russel Brand is how I first found out about the movement and she swooned over how he was the raw definition of sex. I mentioned how I admired his articulate nature. I have this calling to talk as if on a soapbox as Russel does, speaking on what’s going on in the world. All I can say is, I think it is healthy to expose oneself to outside allergens and build antibodies as it builds one’s immune system; though not as extreme as asking someone to directly sneeze on me like Dwight from the office. I also think being mentally strong, using auto-suggestion helps. 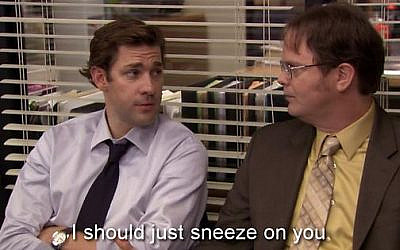 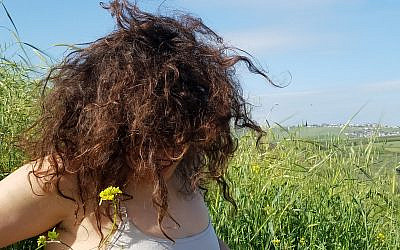 At the communal theirs no hot showers, only an open fairy-well looking bottle-shower-head one. I love it, the cold water snaps me out of feeling like a dirty hippy and more like a bourgeoise visiting a villa in Italy for a wine tasting. 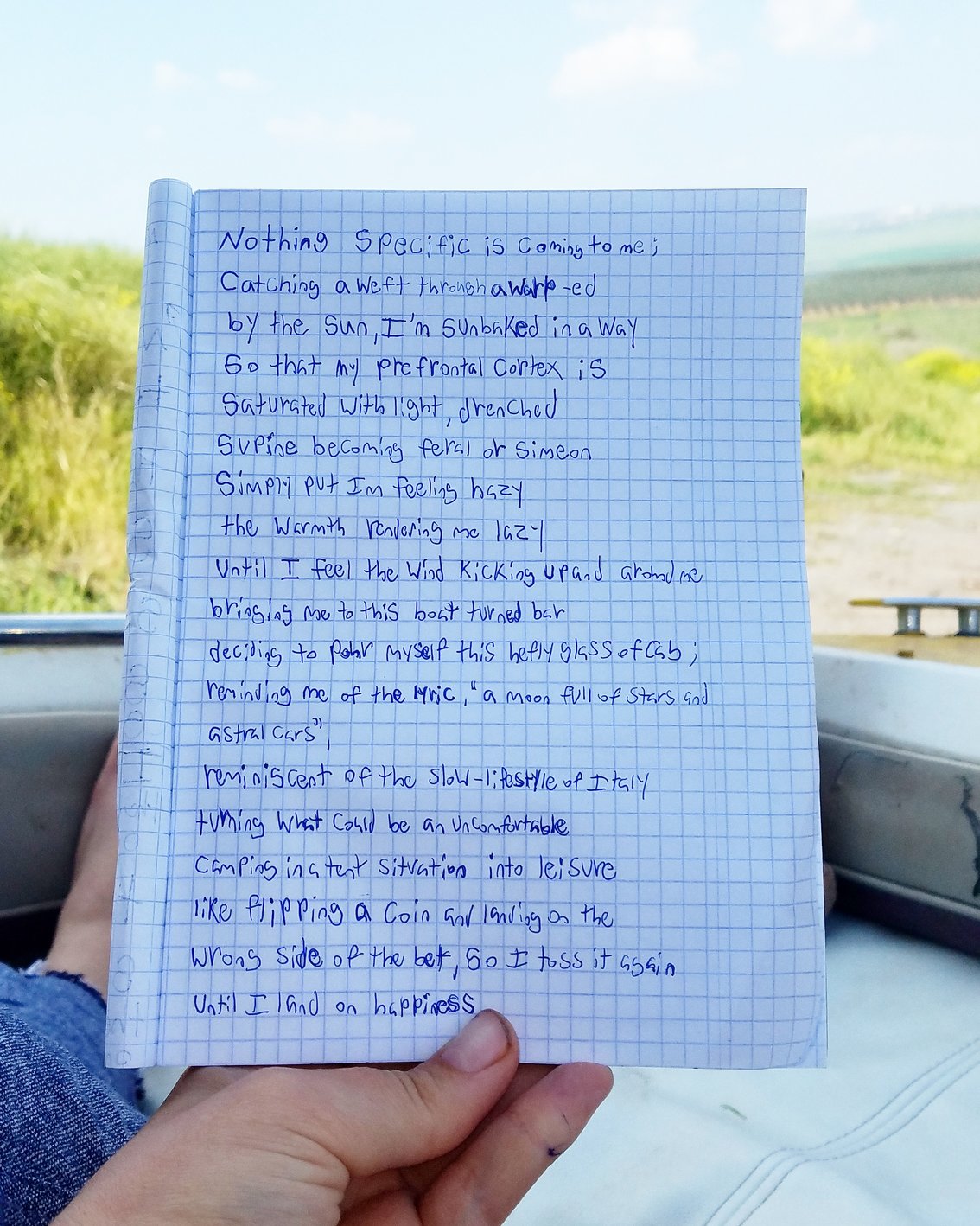 I say out loud to everyone,” it’s because I have Russian blood I can tolerate the cold, I’m strong like bull “, as I dance sexily in good jest. This is exemplary of autosuggestion. I’d rather shower like this looking out at the rolling bluffs and watch the wildflowers sway in the wind than in my filthy tlv apartment, alone and I don’t know what depraved from social interaction people are doing video chatting their showers. I dry off in the sun and sit on this boat turned bar as I make myself a salad wrap and I ask a hippie boy to brush my hair while I eat . Yes I’m aware I’m hilarious. 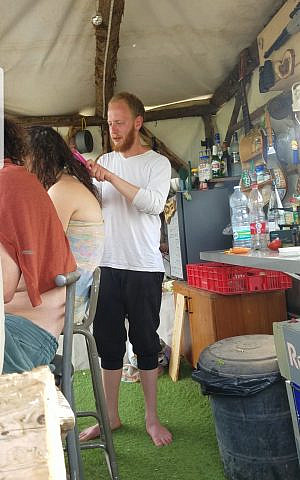 For a budding commune in the woodworks, I’m pleased there isn’t as much legislature as a kibbutz nor as much imposed groupthink as a 70’s commune or the one in the movie Wanderlust. 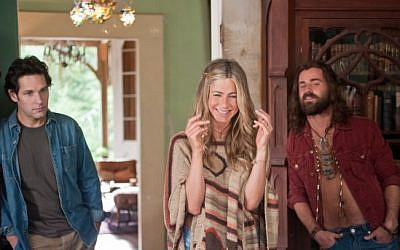 The only thing that’s somewhat mandatory is the group meeting or ” circle” at the end of the day. Its held in ” the hole” this cavern that’s been dubbed a name that makes it seem unsatisfactory. It reminds me of the solidarity of the cave where the Maccabees committed mass suicide though I feel like I’m suiciding listening to everyone’s psychodrama.  venting about their interpersonal issues such as,” Ididn’t take enough time to compassionately listen to someone I’m a terrible person”. and its a relief and great fodder that I’m looking at things through the lens of comedy .laughing so I also don’t take myself to seriously.I see it as a way that we are all integrating from the shallow, immediate satisfaction culture dripping with lust for dopamine from a Fb like. While listening I am also aware of the concept of compassionate listening. Of emptying one’s mind not thinking of what to say next, not thinking of a way to resolve someone’s issue. Now that I’m home, I see how at the time it is tedious, though truly listening to what others are saying, I feel is maturing me, so that I can move past this age of ” adulting”. I also feel cared for: staying in touch with the commune, it’s such a rare thing. 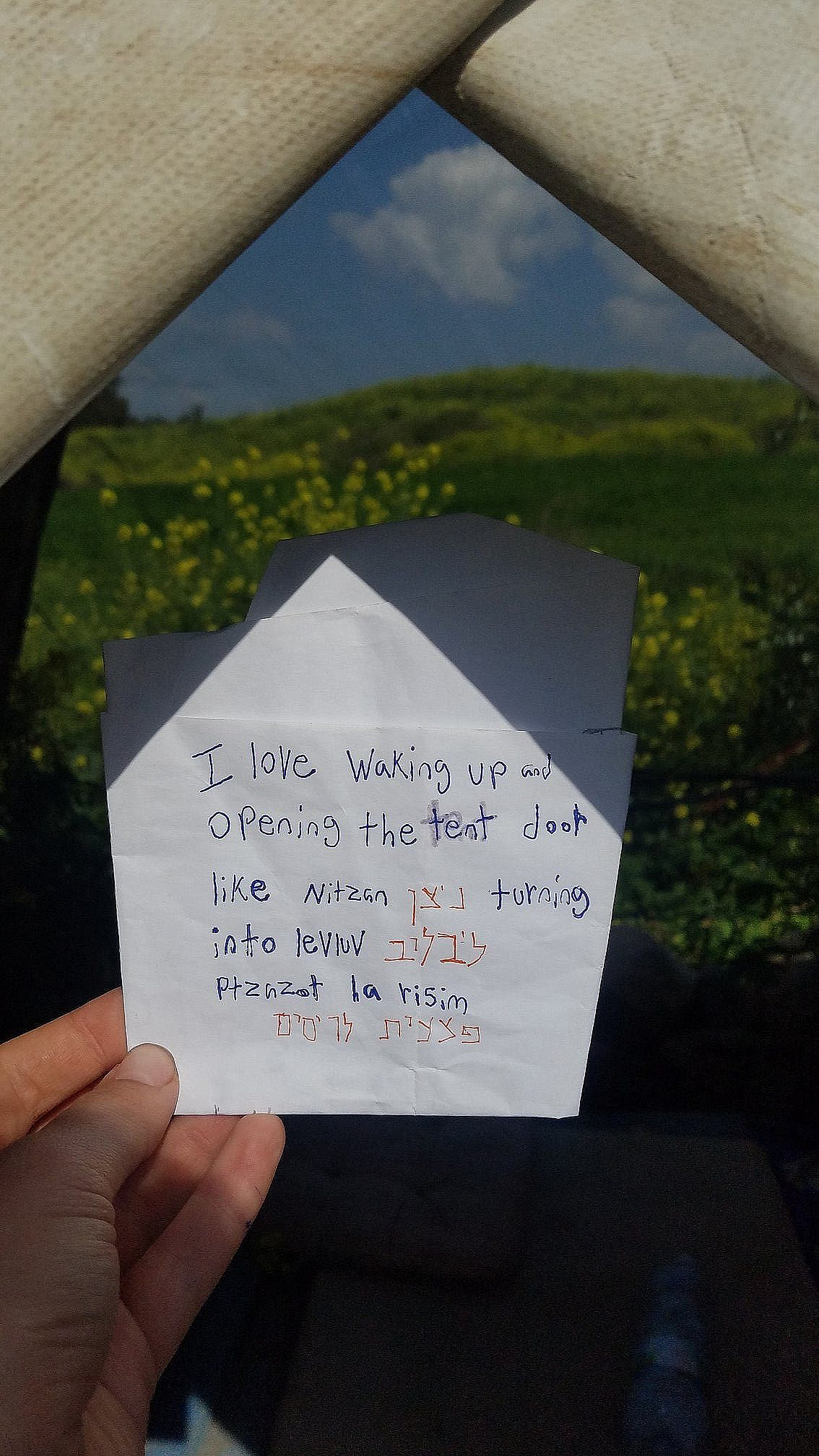 Michelle brought up a good point,” how long have I been here for, omg how do I notremember “. As if being at the Communa is like being in prison or out of touch with reality. Now that this schism is occurring this global rift of fear I don’t feel this guilt and debate between society vs nature. I’m grateful for the air I’m breathing away from the dizzying distractions of the city, to connect in a meaningful way as a community rather thanindulge in self-pity posting memes on Facebook. I don’t feel as though I’m not contributing to society or playing the ratrace as I’m working on the commune with a pitchfork digging mulch and taking funny pictures comparing myself to the painting ” American Gothic”. 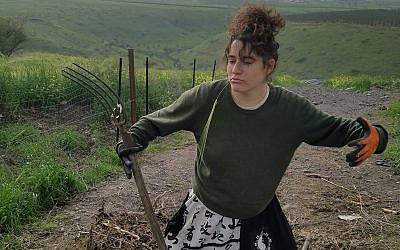 We are all working together to live with the land in a very touching way. I don’t have to have worry hanging over my head about someone stealing from me, theirs no scarcity only a plethora of fruits and wild greens.Every problem that arises I can find the solution in nature or ask a neighbor. Jenn this girl traveling from Germany lent me the shoes straight off her feet so that I could run. 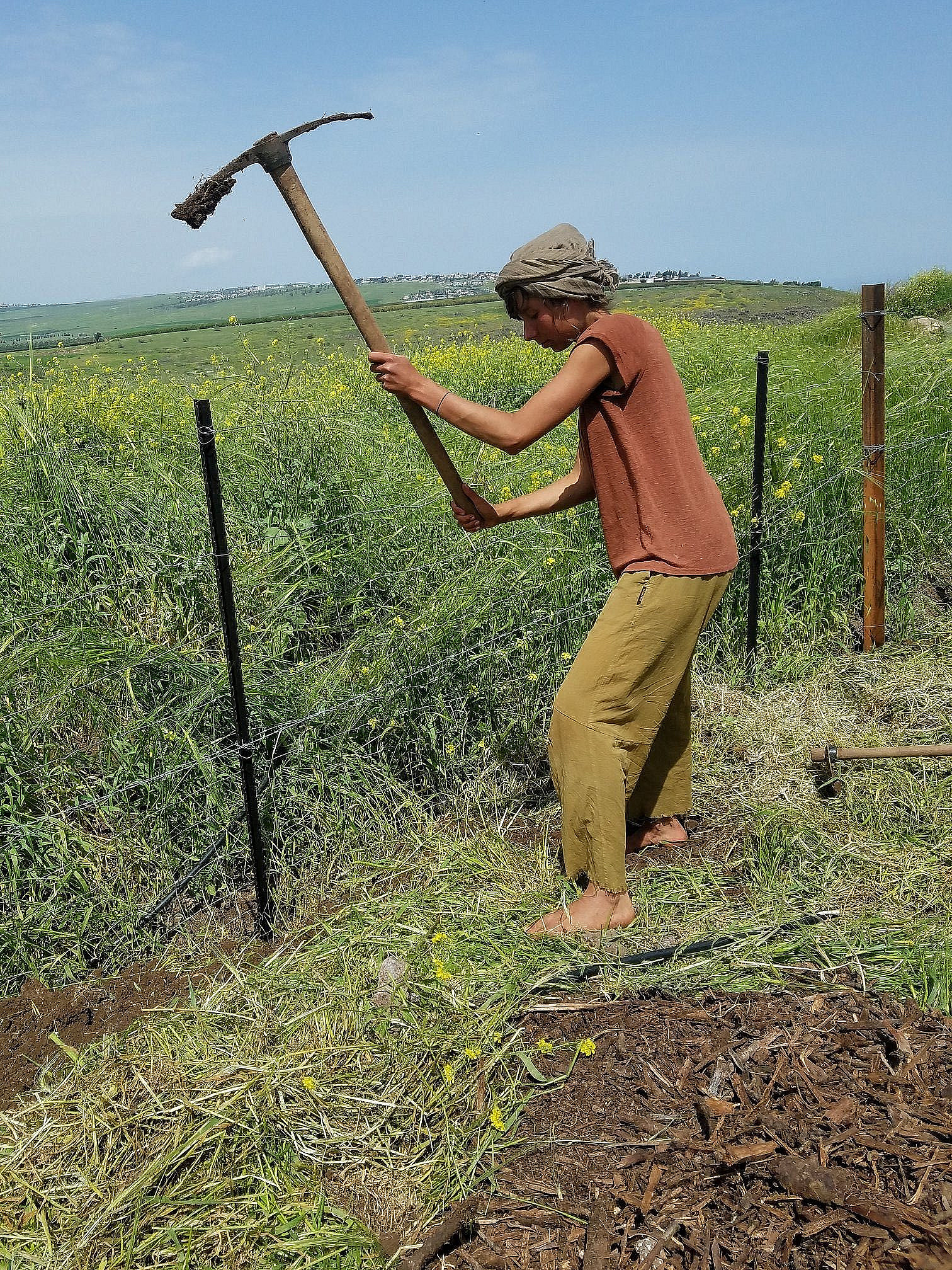 I  also have great admiration and respect for the ” group leaders”. It’s funny every time I refer to them in the plural as the leaders the other commune members go,” wha ?! What leaders, they aren’t the leaders”. I see them farming all day, planting baby trees with a special mushroom fertilizer, working dutifully even if others aren’t working. It’s as if they are pollinators and driven by an impulse to till the earth as if guided by invisible hands of the earth.  Lev, Amit and Jenn and others I’ve seen who live within nature are so beautiful, moving so gracefully the hard work seems in harmony with the land, effortless, they are trees walking, their skin golden. At home now I am gardening, it feels so good to have the sun on my skin, it reminds me of when I was a kid and used to play long hours in the backyard. 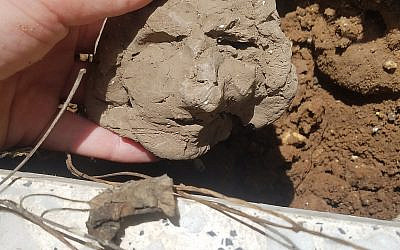 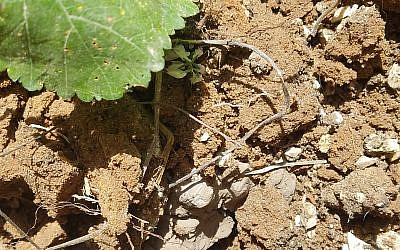 I feel like my “root chakra” is stimulated, this grounding feeling, the feeling you get during Shabbat dinner or being accepted by a group, of having one’s feet in the earth. 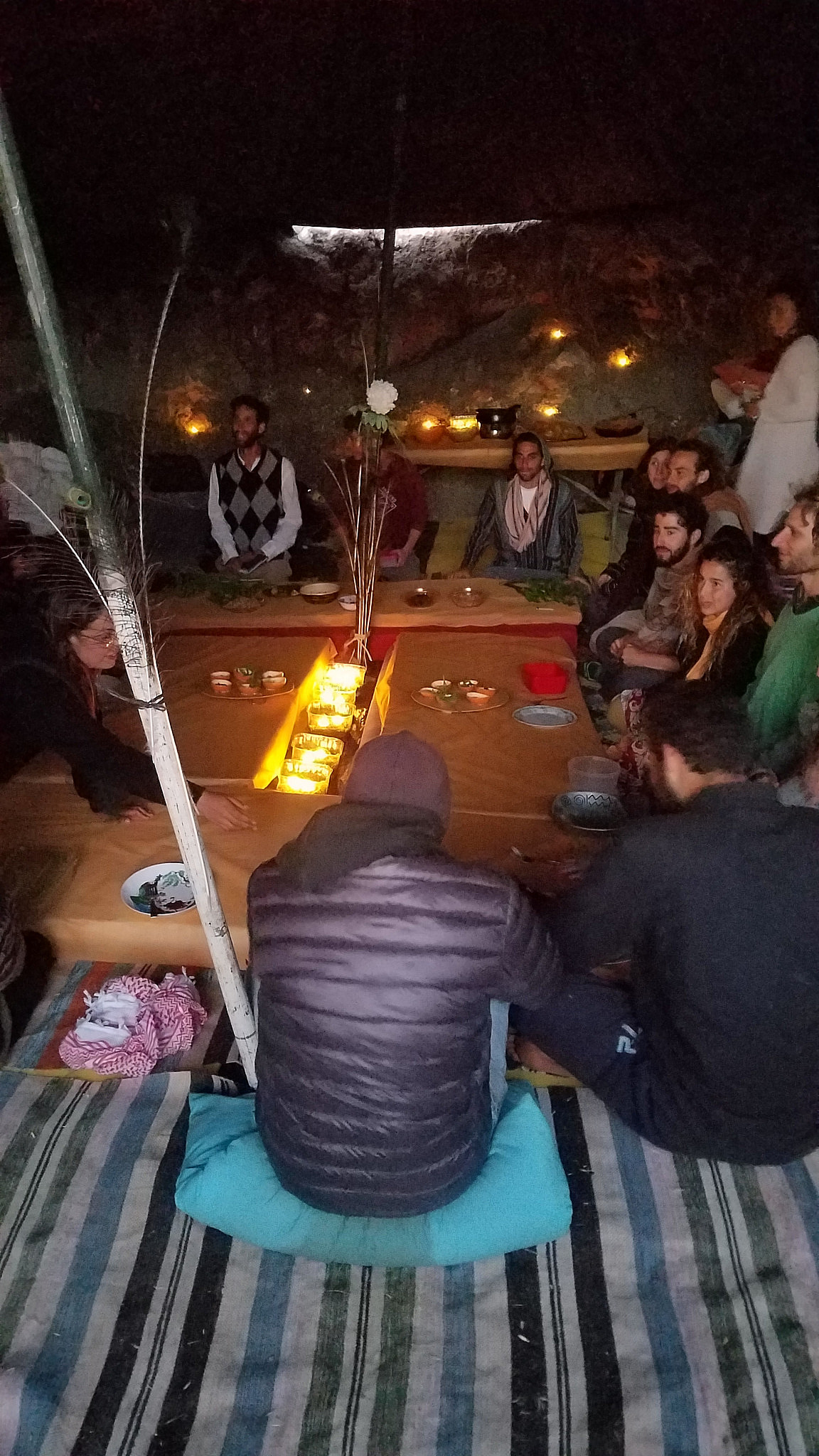 I  don’t feel like I’m struggling for connection, losing my mind in my flat or full of fear wearing a mask like I’m in a mad max movie wracked with paranoia, I feel hopeful and see this as a sign that a new way of living is in harmony with the earth and one another. 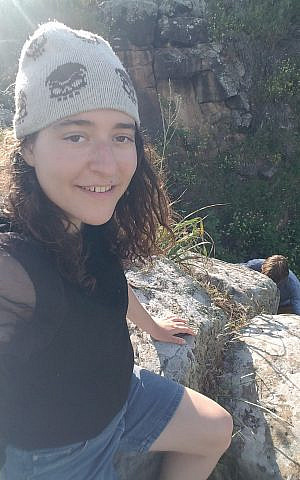 About the Author
Samantha Blake is a eloquent more imaginative version of Anthony Bourdain . She's always out and about , exploring and subverting spaces , so that when she talks with you everything becomes comedic and lit-up like a t.v show.
Comments