The Blogs
Natan Huberman
The Gateway Observer
Apply for a Blog
Please note that the posts on The Blogs are contributed by third parties. The opinions, facts and any media content in them are presented solely by the authors, and neither The Times of Israel nor its partners assume any responsibility for them. Please contact us in case of abuse. In case of abuse,
Report this post.

The past number of weeks in Israel has produced a whirlwind of news. From declaring the end of Corona in Israel to social upheaval and war to forming new governments. And as a religious Jew I tend to look for meaning in these events within the context of our Torah.

But before I mention the particular news article I wish to expand upon, I want to introduce its context as I see it.

In Shelach we meet the ‘princes of the congregation,’ the ‘men of renown’ and influence chosen to enter the Land of Israel prior to the rest of the larger Israelite community. Among their tasks they were meant to display the goodness of the land before the people in a bid to ease latent doubts as to the caliber and character of the Promised Land and to build a desire for connection to this land that had been described as the land where the Divine ‘dwells.’

In arguably the greatest disaster of that generation these Meraglim (spies) did precisely the opposite. Despite their positive report encompassing the goodness of the land while even displaying its rich fruit they emerged as double-tongued. They argued before the people that despite the physical and spiritual loftiness residing in the land it would be better to remain stagnant. The nation should remain in the desert, they said, rather than tackling the complexity that would be a campaign to rightfully root themselves in the Divine territory. In consequence all except for Joshua and Caleb, who denied the negative spin of the report, were confined to the desert they so desired for 38 more years until the generation that relinquished their connection passed.

The burning question that bothers Biblical commentators until today is one of incredulity: How could these princes, these great leaders, who had witnessed miracle after miracle have led the nation so astray?

This week I finally understood the answer.

Rabbi Shalom Cohen, a great Torah scholar and spiritual leader of the Shas political party, met this week with the new ambassador of the UAE to Israel. The rabbi told him that the Temple Mount ‘isn’t for us.’ He told the ambassador that the holiest site in Judaism, the place of the Jewish Temples and where all our prayers are directed towards and which is in Israeli sovereign territory is ‘controlled by the Arabs.’

Now putting aside the absurdity in denying any religious or ethnic group their democratic right of religious freedom on their holy site whether Jew or Arab in the State of Israel, how can such a learned man, a spiritual leader, give away the holiest site in Judaism just like that? I can understand the intricacies in difference of opinion and I respect those Jews who do not ascend the mount for whatever reason despite my adamant disagreement with many of them. But one-sided statements like his do more harm than good. Has Rabbi Shalom Cohen not heard Rabbi Shlomo Goren, a previous Chief Rabbi of Israel, on the halachic significance in visiting the Temple Mount? Rabbi Goren foresaw that the taboo of visiting Har HaBayit among religious Jews would eventually lead to the relinquishing of the ‘Holy of Holies of the Jewish nation.’ And he introduced his halachic treatise on the subject with just that claim – a claim that almost came to be realized in Camp David in 2001.

Despite the miracle that is Israel and the nothing short of miraculous victory of the Six Day War that reunited Jerusalem and the Jewish People with its holiest site the Temple Mount, statements like Rabbi Shalom Cohen’s do nothing more than harm. And that harm includes Jewish religious attitudes. It is no wonder then that this week Moshe Gafni, an MK hailing from the United Torah Judaism party, reiterated to the Knesset how after ‘poring through halachic literature’ there is no way that Jews can halachically ascend the Temple Mount. This came after he requested of Netanyahu last week that the mount be closed to Jewish worshippers. Perhaps he should speak to the Chief Rabbis of many major cities in Israel who actively encourage going up to Har HaBayit and who I’ve personally seen frequenting the site. 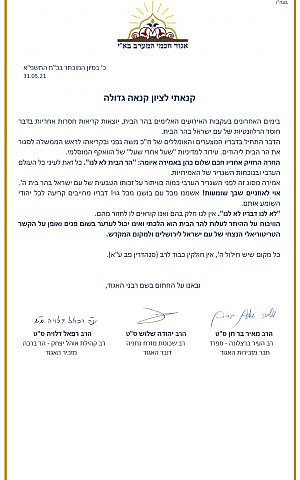 A public letter signed by 3 prominent Rabbis from the Igud Chachmei Maarav Rabbinic body. It decries the words of Rabbi Shalom Cohen. Other organizations, such as the Temple Mount Heritage Foundation, have sent letters directly to the UAE ambassador.

I am all for a variety of opinions, even (or perhaps especially) those I do not agree with, but those who espouse these views should be more responsible in how they share them and in the way they present them. These are not the only views in Halacha and if the Temple Mount is holy to them then they should perhaps act that way. And perhaps Rabbi Gafni should come to the entrance to the Temple Mount some time. He would see that many of the daily religious visitors are in fact Hareidi worshippers that voted for his party and who he represents. The topic even amongst the Ultra Orthodox is not so black-and-white.

Unless there is a change in religious attitude towards the good land that is the Temple Mount then this generation will have succumbed to the same advice that stagnated our Israelite ancestors in the desert for a generation. Alo Na’aleh! said Caleb, surely we can root ourselves to our holy places! The Meraglim were great leaders. But if Shelach teaches us anything it is that even great leaders can provide instruction that leads to Churban. And in such a debate I hope and pray to be on the side of Joshua and Caleb who were able to enter the land and reap its spiritual benefits.

About the Author
Natan is a medical school student and a social and Temple Mount activist. He hails from Toronto, Canada and made full Aliyah in 2014, although he has been making Aliyah to the Temple Mount since 2011. His passion for the Temple Mount began in Yeshivat Har Etzion and continued through his Bachelor's degree, his military service and work in the Israeli defense industry. Previously he was the project manager at Students for the Temple Mount and still guides on the Temple Mount at the Open Gate organization.
Related Topics
Related Posts
Comments