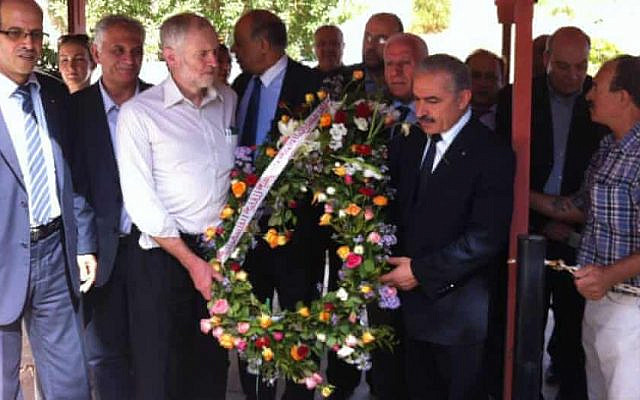 Jeremy Corbnn lays a wreath at the graves of four of the Munich 1972 terrorists-https://www.theguardian.com/politics/2018/aug/13/jeremy-corbyn-not-involved-munich-olympics-massacre-wreath-laying#img-1

…….or “my role in Jeremy Corbyn’s suspension!”

I stride up to the school, still on the phone.

I’d been talking all day. Consulting with friends. Unsure what to do.

Even now, I am speaking to a close friend, like me a life-long Labour voter.

It was 12th December, 2019. I was voting in a near marginal Conservative seat. A decade earlier, I explained to anyone who’d listen that voting Conservative would result in the slow destruction of our social infrastructure. I was right!  And the incompetence! Can’t think of one successful public service reform: welfare, nursery education, probation, health, legal aid. Nada! In addition, Boris Johnson’s party seemed to me to offer clear threats to our human rights framework, to broadcasting and judicial independence, and to developing a timely effective response to Climate Change.

Although I never voted for him as leader, I saw Corbyn’s selection as providing a welcome  re-prioritisation of the common social good. The 2017 manifesto, I liked. The 2019? Well, not convinced. Too much promised at once. Insufficient prioritisation. Was it affordable? Were they competent, given their chaotic Brexit policy?

Whatever the pros and cons of each party, one thing I knew: as a Tottenham Hotspur Spurs season ticket holder, I’d rather support Arsenal than vote Tory (Conservative)!

But there was the antisemitism of Labour up against the pro-Jewish, pro-Israel Tories.

My friend, not Jewish, is unsure anti-semitism is a big enough problem.

I tell him again, “It’s real. I worry for my children.”

Suddenly I’m in the polling station.

I still don’t know what to do.

I take my voting paper.

Then down at the lead pencil on string.

I raise my head.

Suddenly I see my Zaida, now 136, on the dockside at Liverpool, 1903, arriving from Devenishok, Vilnius.

I don’t even recognise the Liberal Democrat’s name.

I put a firm cross by it.

It is dark and raining.

I go for a long walk.

I’d never seen a photo of Zaida, dockside at Liverpool!

I don’t believe in ghosts!

I remembered a conversation with an old Israeli, who’d fled Russia pre-war. Head back, nostrils working like a Schnauzer dog’s, he told me, “In Galut (exile), a Jew always has to sniff the air for danger.” Did the vision come from that primal sense of self-preservation?

Well, the Conservatives held the seat, with a slightly increased majority. Labour was routed in the country. Corbyn stepped down.  The Conservatives are as bad as expected. But I still think I did the right thing. Would I expect a Black British man my age to vote for a party whose leader tolerated the kind of racism towards Blacks that Labour directed at Jews?

England has been good to the Jews. I spent 30 years as an NHS consultant wearing kippa and tzitzit on the wards without problem. I even wear them at football grounds! Whenever I was interviewed on TV, community members never remembered what I said, they all kvelled, “You wore your kippa and tzitzit!” And the English found something offensive about the Party’s antisemitism. Just before the 2017 election, I sat on the 24 bus, going through Gospel Oak, a traditional working class area, listening to local women, old-time cockneys, declare “Couldn’t vote Labour now, not with that Corbyn in charge….and that antisemitism is disgusting!”

This week, the Equalities and Human Rights Commission agreed with those ladies. One benefit of retirement is you can hear news as it breaks.  I read Corbyn’s statement then heard that of Keir Starmer, whom I’d voted for as leader. I was tearfully relieved, I confess, then  tweeted “ Thank you @Keir_Starmer! How d’you reconcile @jeremycorbyn ‘s statement that “the scale was dramatically overstated” & yours that people holding such views “should be nowhere near the Labour Party”?

Two hours later, Jeremy Corbyn was suspended. I am glad that Keir took the hint!

My children can walk more safely now. And I hope, one day, so will every Black, Asian, Polish and Romanian heritage child, and that Labour will reform, regain power, and re-orientate Britain towards the greater social good.  The country needs it.

My late Uncle’s wife had a relative that died in the Shoah. I’ve seen a photo taken on chol-ha-moed, in a forest, wearing his silk capota and gertl. He refused to leave for England because “Jews lose their Yiddishkeit there.”

Tragic and ironic. But that we’re still here able to be openly Jewish is partly thanks to a core English tolerance that I hope my vote has reinforced. From now on, I’ll light a memorial candle to him each Shabbat, to tell him his Yiddishkeit continues. I don’t know if that’s any consolation to him, but his memory and his desire deserves to live on.

And Zaida, if you’re reading this, thanks!