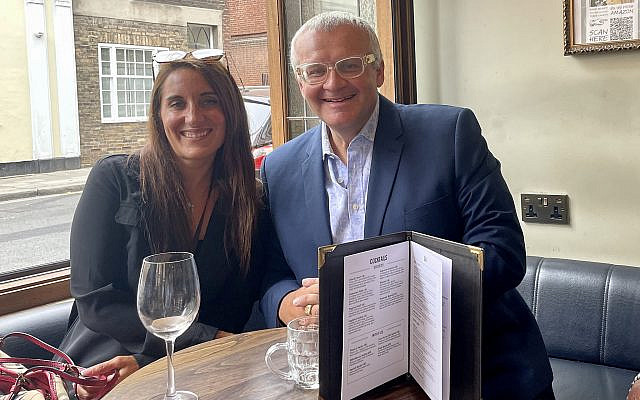 While living in Tehran, married with kids and barely out of teenage, Catherine mixed in the regime’s classes, socialising, even going on pilgrimages to Iraq. She had a private discussion in the court of the Supreme Leader, Ayatollah Khamanei (what did they talk about?) and campaigned with wannabe President Raisi in his private plane.

Extraordinary enough, you say. Quite interesting, I hear.

But Catherine is Jewish, of French Sephardi background.

As an outsider in plain sight, Catherine never revealed her Jewishness – obviously – so got up close to the leadership. She says it’s a deeply political and ideological regime, not religious. Even Nihilistic.

Yet she wasn’t working for anybody or anything. This is a life she came to live.

In Yemen, Catherine started writing articles critical of the Saudis which came to the attention of Iran.

And while living in Tehran, she travelled with Raisi on the election trail – and Ayatollah Khamanei did most of the talking in her private audience with him.

This is Catherine’s highly revealing and detailed story of what drives Iran’s ruling class.

It’s a forensic eyewitness of a regime, which she says infiltrates the West – with murder on their minds.

“I was looking for the right outlet to come out with a bang regarding my identity. I ended up writing about my interview with President Raisi and included the fact that I was Jewish. I set Iran on fire, and the regime went nuts!”

And that’s not all about Catherine. She’s descended from Sephardim who stayed in Spain for centuries after the 1492 expulsion. The 1930s, in fact, when her family ran from Franco’s fascists aiming for Palestine – with tragic consequences.

So this is also a story of Jewish resilience. How trauma can travel through generations yet Jews emerge triumphant in a culture which strives for a better life for its children even at cost to oneself.

Catherine is now a research fellow for the Henry Jackson Society and says she’s now living her truest, fullest life in London – but her experiences of living in Iran and Yemen present her with an opportunity to warn the West of the Iranian leadership’s murderous intentions.

I sat with Catherine twice and recorded her testimony because one sitting wasn’t enough. It took a second meeting because I came away from our first sit down with more questions from her answers!

“I don’t think people understand that it’s not just Salman Rushdie who has been stabbed, it’s all of us. Our ability to speak freely, to move freely, to think, to formulate an idea that is in opposition to others, and to not be punished for it,” she emphasises.

“It is clear that Tehran is a regime that infiltrates the West with murder on their minds,” declares Catherine.

Her family background in France, Spain and Tunisia is part of the explanation for this extraordinary Iranian chapter – and I want to thank Catherine for never once shirking what must’ve been difficult, very personal questions

About the Author
Jonny Gould is a TV and radio journalist and broadcaster. He’s a presenter on TalkTV and a contributor to Israel’s i24News. On Sky News and the BBC, he earned a reputation for outspoken views on Israel and antisemitism rarely voiced in UK media. Jonny’s podcast on Jewish and Israeli stories has emerged as Anglo-Jewry’s go-to-interview show. “Jonny Gould’s Jewish State”, launched in 2018, is a window into the dynamic of world Jewry and Israel and serves as the podcast of record for its biggest events.
Related Topics
Related Posts