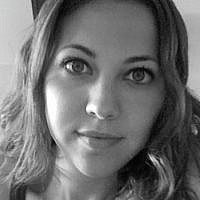 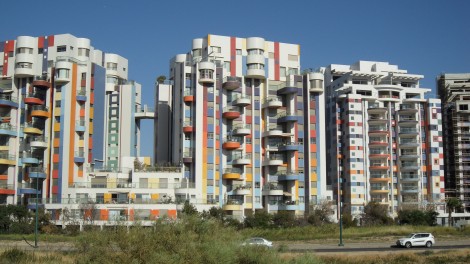 The rainbow buildings – my compass. (The Ne’eman Towers)

“I just booked my ticket to travel to Italy alone, but I’m scared out of my mind. I’m thinking about canceling it,” my friend recently said to me during our lunch together.

She was convinced that she would get too lost, too disconnected and too stuck. We spoke on and on about how exploring unknown territory alone is one of the most exhilarating experiences anyone can have. Plus, we agreed that if all else failed, there would always be handsome Italian men who could pretty much make up for any mishap that came along her way.

“Some of my favorite moments I’ve had when I moved to Israel on my own, happened when I was alone and lost,” I told her.

Of course it’s really nice to be surrounded by family and friends, but the times when I was alone stick with me in a different way, because each time, a little part of me was afraid that I couldn’t do it. The funny thing is, the small daily decisions I made on my own were some of the most impactful ones.

I remember it was a few months into my new life in Israel and I decided to walk to my favorite beach in front of the “rainbow buildings.” I knew that the beach was about a 5 minute drive from my apartment and that it was “that way.” These rainbow buildings were my compass as I walked with confidence on the lookout for them, no Google Maps or GPS needed. Thirty minutes passed by, and still no sight of the buildings. I was drenched in sweat, realizing that this may have been the hottest day of the year. Cars slowly began to stop for me, asking if I needed help with anything. “No, thanks, I’m fine!” I walked for another hour and FINALLY saw the buildings! As I reached the beach, I collapsed on the ground beneath a canopy. “I made it!”

My chest rose and sank with each deep breath I took as my back settled into the sand. A mother and her two daughters lay near me, and as she put on her straw hat she asked if I could take a picture of them by the sea. I snapped the picture, thought about going in the sea myself, but instead, called a cab to drive me home. I think I stayed at the beach for a total of just 15 minutes before I left, but I could feel my heart expand. It was a small thing – walking to a beach, but to me, it represented my resilience, something that at the time, I wasn’t sure I had a strong sense of.

A few months later, I decided to spend the day there alone on the boardwalk. I slathered on my sunscreen and began walking along the main strip of hotels. All of a sudden, the street began to empty and flashing blue lights surrounded me. Men in dark uniforms who were holding large guns began to fill the area I was in and block off the street. They yelled at me to walk to the street that was parallel to where I was standing. I began to tear up before I even realized how worried I was. I kept repeating to myself, “I think there has been a terrorist attack and I am alone. I am alone. I am alone.” Seconds later, my panic disappeared and I began coming up with a plan on how to get out of the area and who I would speak to for information. I power-walked, as my new mantra became “Everything is okay. You got this!” My heart settled to its regular beat, the tingles I felt in my hands disappeared, and I was in complete control. I called my cousin to tell him to check the news and see what happened. My hand shook a bit, but I continued the mantra. It turned out that there was a bomb scare at an embassy on the street I was walking on, and even though I assumed the worst, everything was okay. There was no attack – we were all safe. I felt a little bit like a fool with a huge sense of relief.

When there is no one else around you, you learn that you can’t afford to panic. Without you even knowing it, your mind and body take control and work to take care of yourself. Moments like this make you realize that no matter what situation you are in, you can handle it – you can take it all on.

It’s the small experiences and decisions that prepare you for the big ones.

When you go out into the world on your own, especially in a foreign country and maneuver your way around cities and plans, you discover pieces of yourself you weren’t sure were even there before. Those pieces become the foundation for everything else that lay ahead of you and within you. These are the pieces you will cling to when heartbreak brings you to your knees, and the ones you will show to the world when everything falls into place. These pieces become a part of who you are, and the best part is that there are always new ones to uncover. To me, that’s power.