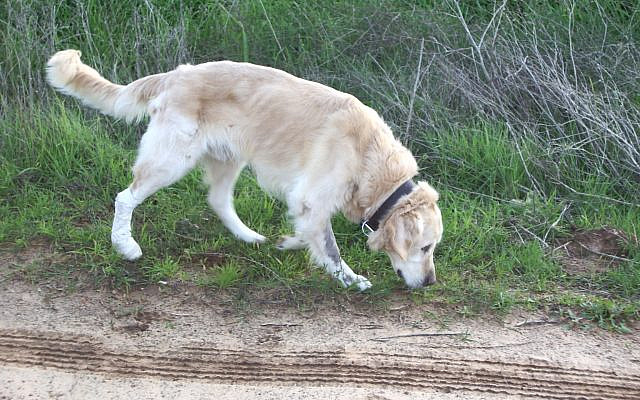 Sadly, I have no photos of my Lab, but here is Dusty, my Golden Retriever

I talk to the trees and they listen to me.

The dog kennels had many dogs on offer, but I chose the brightest, sweetest puppy, a yellow Labrador. I had spent many hours preparing for our new dog’s arrival. In the garden, a large, comfortable kennel awaited. I had built it myself and it had everything that a dog might need.
We drove back from the kennels and I took my dog to see his new home. He took one look at it and said, quite clearly, I’m not that sort of dog, and strolled into the house where he curled up, in a corner, on the thick living room carpet. He never went in the kennel, which ended up on a Lag b’Omer bonfire.

I had learnt something important; dogs can speak. I wondered if there was anything else that might have something to say if only we are prepared to listen.

I glance at the fishpond. While I have several brightly coloured koi, there are some plain white fish and a few black fish. This time, I started the conversation. How is it that you white fish are swimming with the black fish, I asked? One of the larger black fish looked straight at me, this is not Minneapolis he said, we fish are colourblind. Yes, said a white fish, this is our home. We are all fish and we all swim together. We are too busy keeping away from that big cat to fight amongst ourselves – cats can get coronavirus, you know. As we fish say, unus pro omnibus, omnes pro uno. I must have looked blank. The fish shook its head, surprised at my ignorance – Don’t you speak Latin? That means one for all, all for one.

I was about to move away when another fish glared at me. Didn’t you hear what Jacques Cousteau said? ‘The best way to observe a fish is to become a fish’. Why don’t you join us? Yes, it was definitely time to move on.

Leaving my fishpond, I glanced at my latest plant. It was a Dogwood known as “Arctic Fire”. It was not looking happy. I had been told that this plant is popular in Minnesota with good shade tolerance. I wasn’t sure that a plant could talk but before I could say anything, it started shouting at me. What’s up with you humans? If we can tolerate the shade, why can’t you tolerate each other?

I glanced at my rose bush, it needs a lot of care and attention so there is only one. It gave a deep sigh and said – Why didn’t they ask us to help? In the Minneapolis riots, protesters bombarded police with anything that came to hand. Back in 2019, protesters in New Delhi offered police officers roses, even though nine demonstrators had been killed during the protests against a new citizenship law.

Yes, we could learn a lot from the other inhabitants of our planet, if only we would listen.

(I Talk to the Trees – Music by Frederick Loewe and the lyrics by Alan Jay Lerner.)