I want to believe that the real people of Tamra are those who opened their doors and organized a refreshment station for the pilgrims of Har Meron after the tragedy, while fasting during Ramadan, and not those who beat a Jewish man who only wanted to get home to within an inch of his life.

I want to believe that there are more people like Michael Ben Zikri, who rescued a Bedouin woman and three of her children from drowning, losing his life in the process, than those who sought to evict families from their homes in Sheikh Jarrah during Ramadan in order to impose a Jewish settlement in the heart of the neighborhood.

I want to believe that the tens of construction vehicle operators from the Arab villages surrounding Nahariya, who came to the city’s aid during the flood, working through the night, without being asked, to save those trapped in their cars and transport them home, delivering them with their scoops to the balconies of their apartments, and then helped clear the debris, represent the will of their communities, and not those in Akko who attacked a Jewish man, leaving him in critical condition. 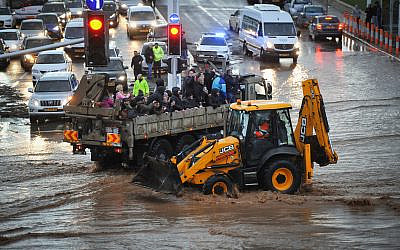 I want to believe that the hundreds of Jews who visited a Mosque in East Jerusalem that was fire-bombed by Tag Mehir, represent the relationship most Israelis want with our Arab neighbors, more than the La Familia thugs who wreaked havoc in Bat Yam and lynched an Arab man who just wanted to get home to his family in Jaffa.

I want to believe that the compassion and dedication shown by the many Arab doctors and nurses during the last year for their Jewish patients, even reading them the Haggada of Pesach for those who could barely breathe, characterizes their true essence, and not the rioters in Ramle and Lod who descended on a Jewish suburb, attacking them with rocks and Molotov cocktails.

I want to believe that the Israeli volunteers who shuttle Palestinians needing treatment to Israeli hospitals from the border on their own time and at their own expense, exemplify the true spirit of Jewish values, and not those who participate in the Dance of Flags on Yom Yerushalayim, who march through the Muslim Quarter, vandalizing property and intimidating the residents, to rub their noses in their loss of dignity and to impose upon them Jewish Supremacy.

I want to believe this, because I believe that WE must determine how we live, not those on the fanatic fringes. When the hostilities cease — and they will — there will be a morning after. And we will be left to once again live with each other, (or beside one another), one way or another. And WE must choose how we do that. Because neither of us is going anywhere.

For twenty years, we have rebuilt trust and respect. We have slowly grown closer to one another. We have built understanding and cooperation.

And we cannot afford to have that taken away from us and to go back to living in an atmosphere of distrust and resentment, fear and suspicion like we did after the Second Intifada. I want to believe that today we are both better than that. I want to believe that we will no longer allow the extremists to determine the nature of our relationship, and that sanity will overcome zealotry.