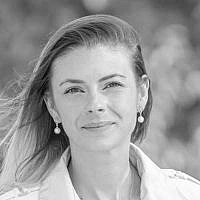 The Blogs
Shany Lousky-Levy
Apply for a Blog
Advertisement
Please note that the posts on The Blogs are contributed by third parties. The opinions, facts and any media content in them are presented solely by the authors, and neither The Times of Israel nor its partners assume any responsibility for them. Please contact us in case of abuse. In case of abuse,
Report this post.

Like many Israelis, this time of the year is my “Bein Hameitsarim” moment, a period of grief and reflection from Yom Hashoah – Holocaust Memorial Day – leading up to Yom Hazikaron – Remembrance Day for Fallen Soldiers and Victims of Terrorism, immediately followed by the emotional transition to Independence Day. Every year it is a difficult challenge to overcome, and – like every Israeli – each aspect has its own baggage to deal with.

But this year, this period of time turned out to be extra difficult for me. I’m a proud ex-combat fitness officer in the Paratrooper’s Brigade and I served in the reserves as a lawyer in the IDF’s COGAT civil administration liaison unit. Today I’m a proud mother to beautiful twin boys, to whom I promised from day one, that when they’ll grow up, they won’t have to go to the army, because the State of Israel will have peace with all its neighbors.

This year, my toddlers can finally communicate clearly and they love to sing. They’ve been learning songs for Independence Day. While we were driving back from kindergarten, they started singing spontaneously, “Ani noladeti lashalom” (“I was born for peace”). Unexpected tears flooded my eyes. This is the first song I learned at school when I made aliyah from France back when I was 7 years old. Back then, my father made me the same assurance that I made to my kids, that I will be able to choose if I go to the army when I turn 18, because by then, we will have peace with all our neighbors. And how could we not when the first song you learn at school is about being born to make peace?

The iconic song was written by Uzi Hitman on the occasion of the birth of his son, during the negotiations that preceded the signing of the peace agreement between Israel and Egypt. The future could not have looked more promising. It beaconed new life, hope of peace and prosperity for the future of the children of the region. But unfortunately, Israel has known too many more wars since. Too many military operations. Too many casualties of young and bright soldiers with promising futures ahead of them, and innocent civilians that the hope to achieve peace they had been taught would come. And I’ve known too many of them. I carry invisible scars my whole life that I managed to suppress with time. It is now part of my DNA as a proud Israeli who grew up here. Who served here in the army. who attended too many funerals, laid wreaths on fresh graves and heard unbearably sad eulogies from bereaved parents.

When my boys pronounced these words so clearly and naturally, “ani noladeti lashalom”, I couldn’t help myself but cry. I was filled with pride and so many mixed emotions. While we remember those who are no longer with us, I remember who is responsible for this loss. A generation of Palestinians that unlike us, did not learn songs of peace growing up. On the contrary, their upbringing was fueled with hatred and impossibility of coexistence. But I also truly believe in change. I believe in education. Through my work, I have dedicated the past seven years of my life to the mission that education is the road to peace. It is at this special time of year that I recommit to that mission. It may not come soon, but as recent regional changes via the Abraham Accords show, the Jewish State is being more and more accepted. Which is good because it is not going anywhere. And its people were born to peace.

About the Author
The writer is Chief of Staff of StandWithUs-Israel. StandWithUs is an international, non-profit and non-partisan Israel education organization that works to inspire and educate people of all ages about Israel, as well as challenge misinformation and fight against antisemitism.
Related Topics
Related Posts
Comments