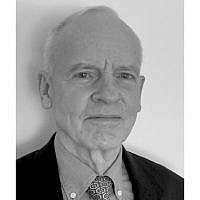 The Blogs
James G. Lindsay
Apply for a Blog
Advertisement
Please note that the posts on The Blogs are contributed by third parties. The opinions, facts and any media content in them are presented solely by the authors, and neither The Times of Israel nor its partners assume any responsibility for them. Please contact us in case of abuse. In case of abuse,
Report this post.

Israel is a small, if highly-talented and punching-above-its-military-weight, country in a world that is composed of three superpowers. Two are evil dictatorships, emboldened by the timidity of the third, more benevolent, one. Both evil dictatorships are now on the belligerent, imperialist march in Europe and Asia, respectively. In such a world, must not small countries like Israel tread carefully, mindful that in the titanic struggle amongst the three superpowers, victory by the more benevolent one is not preordained and that victory by either or both of the two evil dictatorships would almost certainly bring great harm, if not destruction, on those who have opposed them?

I’ve argued to my more idealistic friends that the clear evidence of American lack of will (and increasingly, due to defense budget constraints, lack of ability) to deter the two evil dictatorships requires Israeli caution regarding involvement in great power struggles. America gave only lip service to supporting the spontaneous and moderate Iranian uprising in 2009, and to the spontaneous and (initially) moderate Syrian uprising in 2011. Hence, it was no surprise that the Putin invasion of Ukraine in 2014 led to nothing more than talk and weak sanctions – sanctions that, because of their weakness, actually benefited Putin by allowing him to strengthen Russia’s reliance on its own resources and to blame any resulting pain for ordinary Russians on the sanctions.

It was the Obama-Biden administration that abandoned Syria to Assad/Iran/Russia, thereby putting Russia on the borders of Israel, but the Trump administration, fixated on getting out of the Middle East, was only marginally better – its main improvement being to allow the US military in Syria, when they were attacked by Wagner Group Russian mercenaries on February 7, 2018, to pursue and kill some two hundred or so of the attackers, an event the significance of which (something like, “Trump is crazy; he’ll kill us if he’s attacked, notwithstanding our nukes!”) was not lost on Putin.

With Biden in the White House, it seemed clear to me, Putin was no longer deterred and Russian power would continue to be dominant in Syria – meaning that Israel must be attuned to Putin’s wishes.

Despite my Realpolitik arguments, idealistic Israelis insist that Israel must be more forthright in its response to the Russian invasion of Ukraine – an invasion that, with the early and unexpected setbacks suffered by the Russians, has turned into a horrifyingly brutal onslaught, with rising civilian deaths at the hands of the frustrated Russian commanders. For the idealists, the initial reactions of the Israeli government were unsatisfactory – first, the cautious official statement supporting Ukraine’s “territorial integrity and sovereignty,” then the admittedly stronger words of Foreign Minister Lapid that “The Russian attack on Ukraine is a serious violation of the international order … [and] Israel condemns the attack…,” which words were immediately followed by Prim Minister Bennett’s far milder reaction, asserting only that “Like everyone else, we pray for peace and calm in Ukraine…”

Since then, Israel has become marginally more forceful. Although it declined to sign on to the US position at the UN Security Council, it has voted for the UN General Assembly’s subsequent condemnation of the Russian attack (the latter perhaps as a result of American pressure) and, in response to a request from Ukrainian President Zelenskyy, Bennett has traveled to Moscow in an attempt to mediate between Russia and Ukraine. (As Putin has shown no inclination toward any sort of compromise, Bennett’s trip, and Putin’s receiving him, may be nothing more than Putin’s wanting to distract the West with the hope of a painless resolution, while his brutal attacks determine facts on the ground.) Still, the more direct and forceful Israeli support of Ukraine that would win plaudits from my Realpolitik opponents has not yet occurred.

Despite the seeming clarity and rationality of my arguments for Israel’s deference to Putin’s views, I now have come to the conclusion that those arguments are wrong, and the views of the idealists are right.

Yes, America, the only country that could deter Putin in Ukraine, is displaying a lack of will; no, Israel is not a superpower; and yes, Ukraine is, as Chamberlain said of Czechoslovakia, a “small country” (compared to superpowers) and, unlike Syria, “far away.” Israel’s fear that Putin and China’s Xi and/or their successors will come to dominate the world is real – and, given the situation in the US, is not implausible. Nonetheless, and regardless of the favor Israel may think it will curry by staying relatively neutral with regard to Ukraine, a world dominated by Putin and Xi is not a safe world for democratic states. In other words, to fail to act when action might avoid a world dominated by Putin and Xi has its own risks.

What if tiny Israel gave full-throated support to Ukraine, including the supply of Israeli weapons, and went further than the US/NATO in sanctions? Could that create a political situation in which the Biden administration and NATO would be shamed into matching Israel’s harsher sanctions (harsher American sanctions are already supported by a significant majority of American voters) and enhanced provision of weapons (such as the aircraft Zelenskyy pleads for – and perhaps volunteer pilots for fighter aircraft with which Ukrainian pilots are not familiar)? Would harsher sanctions and additional weapons for Ukraine lead to Putin’s defeat, as more Russian soldiers are killed and more Russian soldiers desert or seek asylum? Would Putin’s embarrassing defeat lead to the fall of his regime?

Would the West have a second chance to encourage Russia to become a peace-loving democratic state?

Would a peace-loving democratic Russia withdraw support for Hezbollah, Assad and Iran?

We don’t know whether ANY of these positive and world-changing events would occur if Israel were to act decisively in favor of Ukraine, but we do know that if serious and immediate steps are not taken to remove Putin from Ukraine, regardless of his nuclear threats, those positive events certainly will NOT occur.

There are risks in all actions (or inactions), but if Israel is to be a “light unto the nations,” then now, at a time of great peril not just to Ukraine but to the entire world, is the time for Israel to lead the nations, showing the righteous and moral way forward.

About the Author
James G. Lindsay is a former trial attorney in the Criminal Division of the US Department of Justice who has spent two decades in the Middle East as the Force Counsel (in Sinai) and General Counsel for the Multinational Force and Observers, and as the General Counsel of UNRWA in Gaza. After leaving UNRWA, Lindsay was a Visiting Fellow at the Washington Institute for Near East Policy, where he wrote a widely-downloaded In-Depth Report, “Fixing UNRWA.” He has also been a faculty member in the University of Hawaii (Manoa) History Department and an infantry officer in the US Army. He now resides in Israel.
Comments