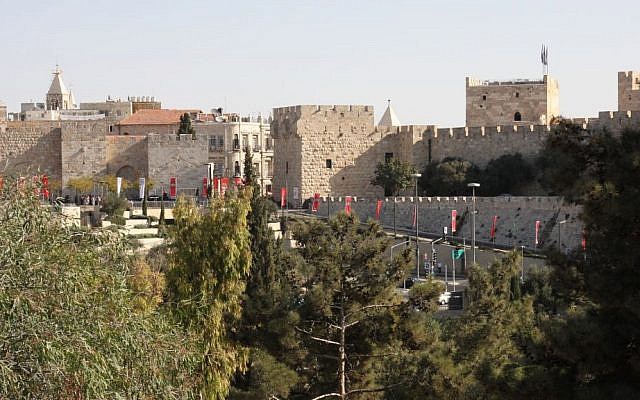 In those days, I was young, and you, beloved city, were already old. We have both become older. You have added lines of trains and highways. My lines are wrinkles, signifying time, distance, and fading. You, my city, now have roads that lead in multi-directions, speeding up the journey to your corners, encroaching your heights. You even have a wondrous bridge which is aglow at night adding mystique and fantasy. O Jerusalem. We have spent time together and I am but one of your many many lovers. You have been lucky in love. So many adore you.

Soon it will be Yom Kippur. This will be my second Yom Kippur in Yerushalayim. The first was that which I, and the world, shall never forget. You started the day at peace and ended it at war. You were defiled but redemption would soon be yours. The year was 1973.

Our American family consisted of two adults and four young children, plus one very ancient dog who was born in the slums of Newark, New Jersey. Who would have guessed that this mangy mongrel would ascend to Jerusalem?

We lived on Rehov Etzel in the neighborhood, a new neighborhood, known as French Hill, Givat Tzarfartit. What an amazing place to plant children Jerusalem was in those days. They were free to wander, take buses on their own and abandon the endless carpools that had been their way of life in suburban New Jersey. School and shul right across the street. Outings in the family station wagon would quickly lead to downtown where the little old woman who owned our favorite restaurant would be heard pounding the adored schnitzel piece by piece. We would hear it sizzling in the pan, filling the tiny space with the fragrance all kids love……as do many of their parents. Fried chicken. What could be bad.

In those days, long before traffic had visited Jerusalem, descending from French Hill into downtown was mere stress-free minutes of breathtaking views of ancient hills, many unadorned by the decades of construction which we witness today. We would reach the center with no worries about parking. King George and Ben Yehuda. Check. Easy parking for Mashbir. The museum. Moments away. A favorite haunt. You were a small city, as I told our friends in America, but you had all the markings and attributes of a big city. Culture. Beauty. Lots to take in. And history that belonged to us. Our history. What was there not to love?

And so that infamous Yom Kippur arrived. I am brought back to that day since we have just spent two magical days in our daughter and son-in-law’s new apartment on the fringes of Baka.This was our first Rosh Hashanah in Jerusalem since 1973 and it did not disappoint. The air was fresher than in the rest of the country and the shul was bursting with spirited davening. We witnessed traditions that were new to me. I had never before seen the touching response of daughters embracing their mothers during the duchening. It was so spiritual and beautiful, filling the sanctuary with love in every direction. It felt so good to be bringing in the newest year in that city. So very good.

Yom Kippur in 1973 did not start out well. I woke up with a fever and sore throat. I could not go to shul so I hunkered down as my family scattered, some to shul, some to play outside with friends. In the mid afternoon the peace was shattered like the glass at the conclusion of a wedding ceremony. A noise designed and necessary to desecrate pulsed through our neighborhood, through the city through the nation. I was an innocent abroad. At first I couldn’t believe my own ears. I could only think back to Newark and the Air Raid drills which our school inflicted upon us when we were told to hide under our desks. Our very protective desks.

These sirens, of course, were the real thing. We, the mothers of Jerusalem, had to find our children and bring them into our miclats. Mine were in four different directions but they were all rounded up and sheltered. My husband returned from shul. There was nothing to say. We were together and we were at war.

The sukkahs went up on schedule. I was apparently the only mother on the block who did not anticipate shortages of staples in the supermarkets. Nonetheless, we found enough to eat. Our hearts were heavy as our friends and neighbors and family members went to war. We knew a fear that we had never before encountered and a love for a city and a nation that will be with us all forever.

Jerusalem, as we prepare to spend another Yom Kippur with you in a few short days, we will pray, as we always do, for our family and our people and our nation and for you, our wondrous, beautiful, city of peace. May your hills and valleys be covered in the blanket of peace and may you live eternally. L’shanah habah b’Yerushalayim.