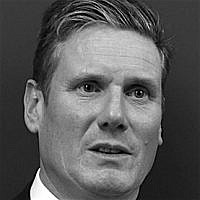 The Blogs
Keir Starmer
Apply for a Blog
Please note that the posts on The Blogs are contributed by third parties. The opinions, facts and any media content in them are presented solely by the authors, and neither The Times of Israel nor its partners assume any responsibility for them. Please contact us in case of abuse. In case of abuse,
Report this post. This Holocaust Memorial Day, as we commemorate the 75th anniversary of the liberation of Auschwitz-Birkenau, we confront one of the greatest evils that humankind has ever inflicted. The mechanised slaughter of Jews, planned, plotted and executed by the Nazis, remains a stain on the moral conscience of the world.

But there is the risk that when we look at black and white photographs of something that happened to other people, in another time, in a different place and at the hand of people with whom we feel we have nothing in common, we might think of antisemitism as a relic of the past.

The sad reality is that we cannot be so complacent. Antisemitism has never gone away and is stubbornly resurgent.

In recent years, we have seen murderous attacks at synagogues in Pittsburgh, Poway and Halle. Last month, we saw a vicious attack in New Jersey and antisemitic graffiti on and around a synagogue local to me in North London. Even this weekend, we saw further graffiti appear in Greenwich. I would like to pay tribute to the staff and volunteers of the Community Security Trust, who responded so quickly and always work to keep Jews safe in our community.

In our own Labour Party, it is a matter of deep sadness and regret that the Equality and Human Rights Commission (EHRC) is investigating the Party over institutional antisemitism.

I share the anger, frustration and pain of many in the Jewish community over how antisemitism has been handled by the Labour Party in recent years. It will be an urgent task of the next leader to turn things around.

I have signed the Board of Deputies ‘ten pledges’ to help tackle the antisemitism crisis. And if elected party leader I will work with the Board, the Jewish Leadership Council and others to banish this prejudice from our movement and regain the trust of the Jewish community.

As leader, I would take personal responsibility for this and lead from the top. On day one, I would demand an update on ongoing antisemitism cases and ask for a clear timetable for their resolution. I will ask the Jewish Labour Movement and others to submit the list of cases they believe are still outstanding and to leave no stone unturned, I will ensure an independent process and work with social media platforms to take hate off the internet.

And my test for our party will be this; do those who have left the Party because of antisemitism feel comfortable to return. Only when they do, will I be satisfied that we have made progress. At the next election I don’t want a single Labour member or activist to knock a door and be told that people who previously voted Labour won’t do so because of antisemitism. If you’re antisemitic, you shouldn’t be in our Party – or anywhere near it.

On Holocaust Remembrance Day it is our duty to remember and learn. I would like to offer my gratitude to the amazing survivors who show tremendous bravery in reliving their trauma to share their stories and fight for a better future and to organisations like the Holocaust Educational Trust that do such vital work in our schools.

The defeat of antisemitism will not be easy, but together, we can and we will prevail.