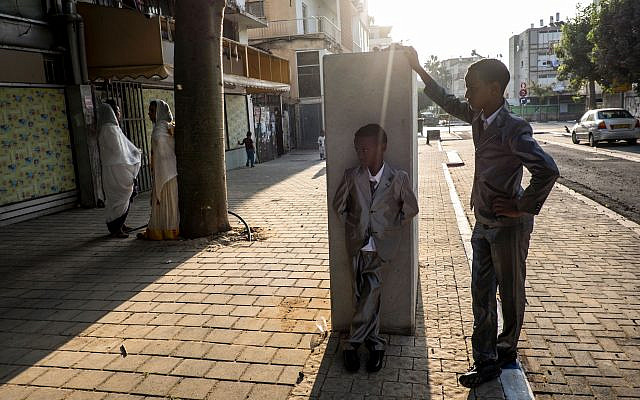 During the past twelve months, I interviewed people in Shapira to see how they wound up there and what they think of the things happening in the neighbourhood. Here’s what one man had to say.

How did I arrive in Shapira? I’m from Eritrea, you understand? Is your mic working ok? You can hear me?

Good. So, how did I arrive to to Shapira from Eritrea? Great question. I was in the army. From the age of thirteen, I was in the army. Yes, thirteen years-old. I was in a special part of the military, learning to be a fighter, a commando. I studied that for five years.

The way that I escaped….I escaped in a way that wasn’t legal. Why? I escaped with my gun, with everything to Sudan. I went through Sudan to Egypt and from Egypt I came to Israel. So now I live here. I escaped when I was eighteen from Eritrea. I arrived in Israel a long time, in 2007. I can’t go back now to Eritrea. It wasn’t legal, you understand? I had my gun and all my stuff with me when I escaped. Here too, you don’t get what you need. Eritreans suffer in life.

How did I get here to Shapira in particular? Great question. When I arrived in Israel, first of all, I was in a prison in the desert, near to Beersheva. Then they brought us to a bus and gave us a ticket to the Central Bus Station in Tel Aviv. So you look around in this neighbourhood, you find a place to live and things like that. I lived here in this neighbourhood for 10 years already.

Listen, I’m not complaining about this neighbourhood. Everything is good here. Good people, everything’s ok. There are some racists that ask you questions. But what to do? We are suffering.

What’s good in Israel? What’s better than Eritrea? Here there are democrats, there is democracy. You can say what you want. That’s what’s good in Israel. But it’s not my democracy, it’s for the Jewish people. Democracy here is for for the Jews, it’s not for us. We came to Israel, we applied for asylum but Israel doesn’t want to agree to that. Why? Because everyone here makes money. I’m here every day and it costs me money. Why? Because Israel takes a percentage of our money.

I have no problem with anyone. I have friends that are Arabs, that are Jews. There are some racists that hate blacks. There’s also racism from Arabs that don’t like blacks. But there are people here from every background. Ashkenazi, Yemenites, Mizrahim, Eritreans, Sudanese, Filipino – they all live here in Shapira. Why? Because life here is simple. I can’t live in a flat in Allenby [a street in central Tel Aviv], you understand? I can’t live in north Tel Aviv. I don’t have the money to pay 8,000 shekels a month in rent. Here, I can rent a room for 3,000 shekels. One room, it’s not good. But that’s why I live in this area.