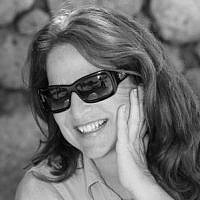 The Blogs
Linda Olmert
Apply for a Blog
Advertisement
Please note that the posts on The Blogs are contributed by third parties. The opinions, facts and any media content in them are presented solely by the authors, and neither The Times of Israel nor its partners assume any responsibility for them. Please contact us in case of abuse. In case of abuse,
Report this post.

“What value and what ‘fruit’ of a movement of national redemption can there be when rather than roots of memory there is forgetfulness?” Beryl Katzenelson, Davar 10 Av, 1934

I was hardly more than a child, in the midst of a Hebrew Literature exam.  I was nearly out of my mind with the news from Israel- my tiny country, my soul. I was torn between deep fear at the danger, and euphoria at the quite biblical achievements of the IDF soldiers.   Every few minutes the exam was interrupted by news from Israel over the loudspeaker, news that was the stuff of dreams prayer and tears born of the long exile. In those very moments the Old City and the Temple Mount was being liberated. Live. In those moments, I felt as though I personally had dreamed every one of those dreams, prayed every single prayer, and that my eyes had shed every bitter tear at every catastrophe. With each meter that the IDF liberated, they were turning certain annihilation to reunification with our roots. With each report my young friends and I jumped up and emotionally sang “Hatikvah”. I ran home after the exam to fall into the arms of my parents- survivors of Auschwitz-and it occurred to me in my exhilaration that never before (or after) had I seen pure joy engulf them through their tears.

In all the time since I made Aliya (37 years) as a non observant Israeli, caught up in the realities of life lived outside Jerusalem, I never ventured past the Kotel to Har Ha’Bayit (Temple Mount). A few weeks ago I did so.

The shock of that visit has still not worn off.

The very air was charged with ugly tension, and I am certain that I was not imagining the looks of hatred sent our way by the hundreds of Moslems milling around freely. They were many, and we were very few, and yet their resentment was tangible. Arab children were raucously playing soccer unimpeded, doing their best to cloud any inherent spiritual feeling. The women in our small group, modestly dressed by western terms, were taken aside at the outset and made to buy Palestinian plaid “shmates” so that our legs were covered to the ground: we were made to “respect” the Moslem tradition, while it was made blatantly obvious that the respect was anything but mutual. We were followed very closely (literally felt their breath on our necks) by an Israeli ( Arab) policeman and a Jordanian Waqf official who kept herding us along, keeping close watch to make sure that our lips were not moving in prayer.  Our guards continually scrutinized us closely enough to make sure that no tears were shed either. At one point, a very large group of about 500 women wearing identical white Hijab and brown Burkas saw us and began chanting “Allah hu Akbar” at the top of their lungs, waving their fists in the bone chilling rhythm.

Everything was done to make us feel threatened, unwanted interlopers. The entire time I was up there, I kept trying to hold in my mind the memory of that day in June 1967 when I could swear that I heard the recording of the IDF heroes liberating  the beating heart of the Jewish People “Har Habayit B’yadenu”- the Temple Mount is in our hands. But you would never know it from the scene on the Temple Mount.

I am unable to understand how, without firing a single bullet, people who, by their own behavior define themselves as our mortal enemies, are nevertheless in control of the site Jews dreamed of and prayed to for 2000 years, and paid for with the blood and lives of precious young soldiers.

How can we accept the fact that the one place on earth where Jews cannot pray as Jews is Har Habayit?  I am not much for prayer, but in words attributed to Voltaire “I disapprove of what you say, but I will [should] defend to the death your right to say it”

How do we accept the fact that there is one place in Israel where there IS discrimination verging on apartheid- that place is Har Habayit, and the apartheid is being perpetrated against Jews!

How can we turn a blind eye to the archeological destruction taking place on Har Habayit, willfully daily destroying our history and precious artifacts?

How can we even consider the Moslem claim to the world that they want control of the Temple Mount site claiming it as holy to them: proving it by letting their children play soccer there?

Why should our enemies not believe that we will abdicate it all since we are willing to abdicate claim to our holiest place?

How can we accept the fact that on the day commemorating the destruction of the Temples, in Israel the conversation, such as it is, is only about “sin’at hinam” ( gratuitous hatred), with no consideration given to what is going on the site of those destroyed Temples?

Too many extremely troubling questions for a people reasserting sovereignty on our ancient never forgotten home after 2000 years of yearning.

But the most troubling of all is the indifference of most Israelis to a situation that in any other arena would catalyze severe public discourse, at the very least.

News just in: Har Habayit has been closed to [all] Jews today, Tisha B’Av, so as not to offend the Moslems! Really?

In 1934, Beryl Katzenelson, secular ideologue of the labor movement in Israel was disgusted to hear that the Shomer Ha’Tsair youth movement had begun their summer camp on the eve of Tisha B’av.  In answer, he wrote in “Davar” “What value and what ‘fruit’ of a movement of national redemption can there be when rather than roots of memory there is forgetfulness?”

Did we yearn for 2000 years, only to forget just when we actually achieved the dream? What does that say about the government of Israel and the people of Israel?

About the Author
Linda Olmert is the Deputy Director of HALIBA- the Initiative for Jewish Freedom (Civil Rights) on the Temple Mount. She made aliyah 38 years ago from Toronto, Canada
Comments