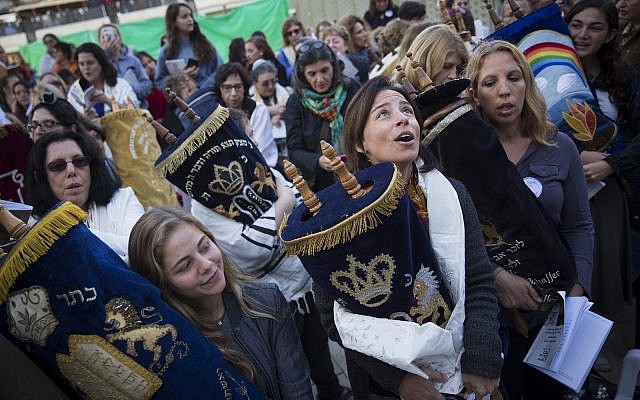 Women of the Wall, together with a group of American Conservative and Reform rabbis, hold Torah scrolls during a protest march against the government’s failure to deliver a new prayer space at the Western Wall,, November 2, 2016. (Hadas Parush/Flash90)

An organization calling its “Chazon” has launched a massive campaign to muster forces at the Kotel this coming Friday to protest against the Women of the Wall, who will be gathering there, as they do each month, to celebrate Rosh Chodesh (New Moon).

This will be a special occasion, because it will mark the 30th anniversary of the first attempt by women to pray and read Torah together at the Kotel.

The origins of the movement date back to 1988 when, at the conclusion of the first international Jewish feminist conference in Jerusalem, a group of seventy women led by Rivka Haut, an Orthodox Jewish feminist, gathered at the Western Wall to offer a prayer of thanksgiving and conduct a service according to Orthodox practice that included the reading of the Torah.

As part of its campaign to combat the Women of the Wall, Chazon has produced a 1-minute documentary film slanderously claiming that “The Reformers have worked for 30 years to profane the sanctity of a remnant of the Temple”. (It should be noted that the Kotel is, of course, not part of the Temple, but simply a remnant of the retaining wall of the Temple Mount!)

The documentary makes use of archival material filmed at the time of the liberation of the Old City during the 6 Day War in 1967. As we all know, those Jews who claim guardianship of the Kotel plaza, who have turned it into a charedi synagogue and who resist the right of the Women of the Wall to worship there, played no part whatsoever in the battle for Jerusalem.

By contrast, the three paratroopers who took part in that campaign and who appear in David Rubinger’s iconic photograph of them standing by the Kotel at the moment that it fell into Jewish hands, support the Women of the Wall in their struggle for equal rights.

Chazon has taken advantage of this 30th anniversary of the commencement of their struggle to attempt to besmirch Reform Jews like myself. They have strung up a banner above a gas station slanderously claiming that “A Reform grandfather = an assimilated father = a goyisher grandchild”.

My late grandfather was a member of a Liberal synagogue in Breslau where his son, my father, celebrated his Bar Mitzvah. I am a Reform rabbi and my son, Yonatan z”l, was killed by the Hezbollah in southern Lebanon in defense of the very country in which Chazon and their like claim a monopoly on Judaism.

The 2nd Temple was destroyed, so the Talmud tells us, because of sinnat chinnam (unjustified hatred). If we don’t learn to live together in this land, we shall perish together.