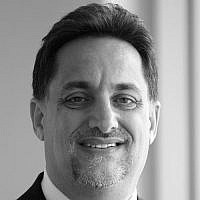 The Blogs
David Waskow
Apply for a Blog
Advertisement
Please note that the posts on The Blogs are contributed by third parties. The opinions, facts and any media content in them are presented solely by the authors, and neither The Times of Israel nor its partners assume any responsibility for them. Please contact us in case of abuse. In case of abuse,
Report this post.
Embed from Getty Images

With all the talk of troubling comments about Jews, what about William Happer?

Given the heated debate over anti-Semitism now taking place in Washington, you would imagine there would be a glaring spotlight on any White House official who had made deeply troubling comments about the Holocaust. Instead, sadly and disturbingly, there’s been hardly a peep about the appointment of William Happer to the staff at the National Security Council.

Last fall, Happer quietly slipped onto the NSC staff, without much fanfare. Now he’s the driving force behind the Trump administration’s new panel to counter widely accepted scientific research about the causes and consequences of global warming.

Though Happer’s a professor emeritus of physics at Princeton University, he’s not a climate scientist. Moreover, his belief that excess carbon dioxide is a positive force directly contradicts the widely-held scientific consensus on the dangerous impact of greenhouse gases on global temperature.

As a climate policy expert, I was disturbed when I heard of his role. As a Jew, I was appalled.

When word of the White House climate panel leaked in late February, there was a brief flurry of media attention about his past comments. But since then, all has gone silent. In a troubling sign of the times, his outrageous statement has largely been ignored by Congress and elsewhere.

Happer’s comparison of millions of slaughtered Jews to carbon dioxide blatantly trivializes the horrors of the Holocaust and the vast human suffering that resulted from the Nazis’ atrocities. Molecules of carbon dioxide can hardly be subject to the deprivations that the Nazis inflicted during their brutal attempt to destroy European Jewry. Conflating chemical compounds with millions of murdered Jews dishonors and grotesquely casts aside the memory of those who suffered and died.

Trivializing the meaning of the Holocaust in this way should always be unacceptable. With his ignorance of history and callousness about real suffering in the world, the last place he should be is on the National Security Council.

Furthermore, it means that he’s also not fit for the task that he’s set himself and the administration on climate change. Someone who is unable to comprehend the gravity of the Holocaust is not someone who should be trusted to understand the dire impacts on people’s lives that climate change is already causing and that will worsen dramatically over time.

Indeed, Happer’s views have already demonstrated his lack of concern for the severe threat that climate change poses for humanity. In a Wall Street Journal op-ed, Happer tried to excuse impacts of carbon pollution by noting that the level of carbon dioxide in the atmosphere over 65 millions years ago was over 3,000 parts per million, well beyond the current levels approaching 410 parts per million. But that entirely misses the point: What we are witnessing now is completely unprecedented for humans. The earth has not seen the current levels of carbon dioxide for more than 3 million years, at a time when sea levels were 50-80 feet higher than today and no humans lived on the planet.

We have never faced the type of changes that are coming. But given his thoughtless comments on the Holocaust, does Happer possess the capacity to care about the pain caused by climate change??

Will he care about the Alaskan communities whose livelihoods and way of life are threatened as ice melts and the sea intrudes? Or about the 1.6 billion people living downstream from the Himalayas who will face catastrophic water shortages as the mountain glaciers that provide their water melt away?

Will he care about those suffering from increasingly powerful and destructive hurricanes or terrifying and deadly fires in water-starved forests? Or about the island nations whose very existence will be endangered by rising sea levels?

In a superb essay, climate author Mary Annaïse Heglar recently suggested that, though climate change does not have a direct historical parallel, we can still learn from the existential threats faced by specific communities, like the slavery and lynching of Blacks in the United States. Those past traumatic experiences can help us understand how to tackle the climate crisis that imperil the basic underpinnings of our society and millions of lives.

Unfortunately, William Happer’s views on the Holocaust demonstrate that he is dangerously unaware of the past and won’t be able to see or understand the devastating pain that climate change brings in its wake. At a time of heightened awareness of anti-Semitism, Happer’s utter insensitivity to the slaughter of millions of Jews should cause alarm. He should not be sitting on the National Security Council with the future of the planet – and especially the people who live on it – in his hands.

About the Author
David Waskow is an expert on international climate policy based in Washington, DC. He has graduate degrees from the Woodrow Wilson School of Public and International Affairs at Princeton University and the University of Chicago Divinity School.
Related Topics
Related Posts
Comments