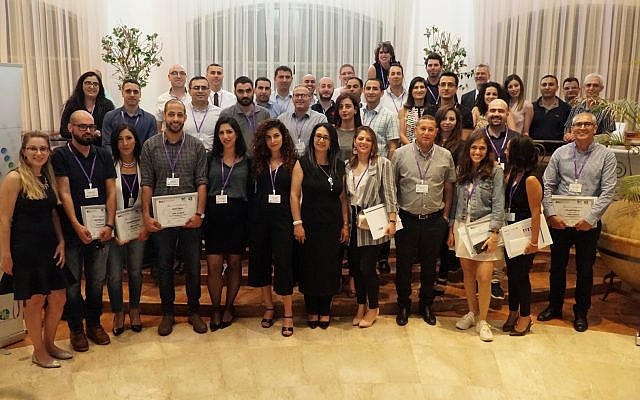 Graduating ceremony for Kav Mahve's Lead Forward program carried out in partnership with Tel Aviv University. Graduates like Mona Hadad, featured in the middle, is a self-taught expert in digital marketing, who regularly speaks to aspiring Arab professionals about how to advance in their career. Spring, 2019.

These days I am meeting a whole young generation of Arab professionals – F.O.D.- First Only Different (thank you Shonda Rhimes for coining this). Moving into managerial positions in top tier companies in Israel, they are charging their generation forward. Unlike many of their parents who often gravitated towards medicine and education if they pursued academic degrees, these F.O.D.s are going into high tech, digital marketing, international law and more.

It takes a lot to be a trailblazer in your family and community. In fact, it can be exhausting to be so original. Their individual achievements, which are stellar, are also part of a bigger story of what happens when there is a new openness to challenge what seems pre-determined and ask why default systems exist. 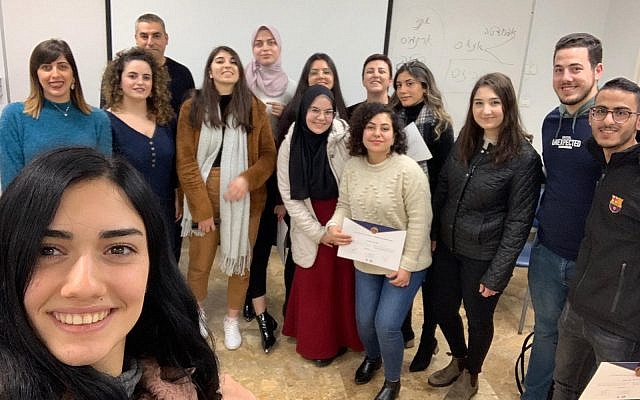 About three decades ago, a conversation started, initially led by activists and civil society organizations, about an uncomfortable topic – the social and economic gaps between the Jewish and Palestinian communities in Israel. Somehow, in fits and starts and with crises along the way, there began a willingness to take something familiar and look at it in a wholly unfamiliar way. A consensus emerged, perhaps surprising among those of wildly different political backgrounds, eventually becoming government policy with the establishment of the Authority for the Economic Development of the Arab Sector in the Prime Minister’s Office in 2008. 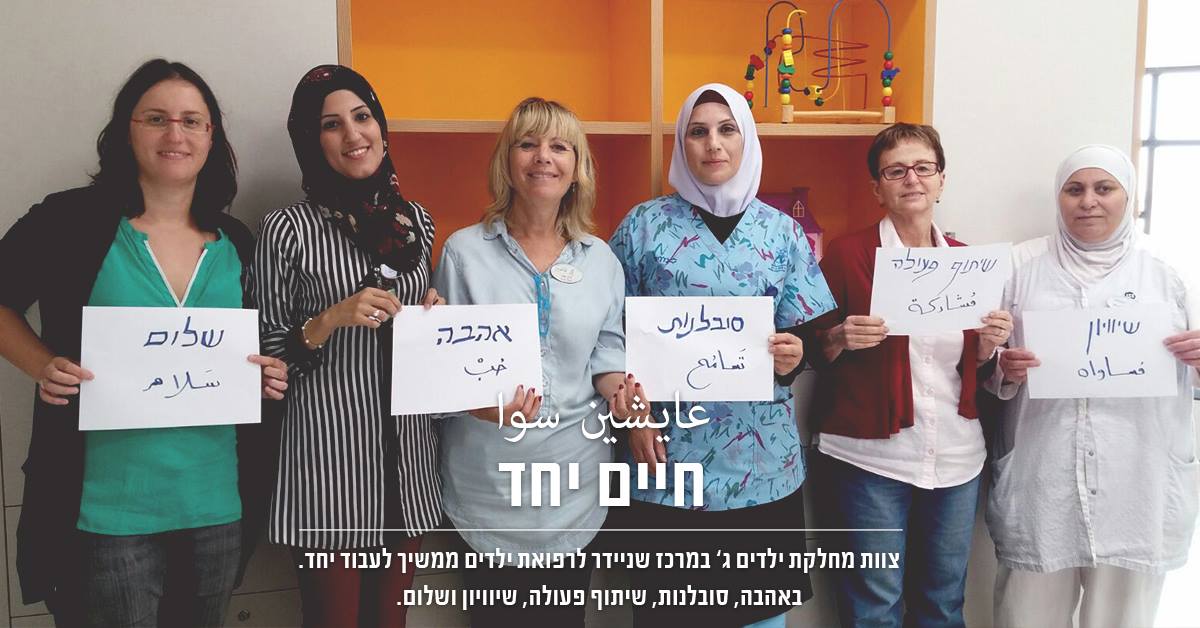 In recent months there has been a prominent acknowledgement of the immense contribution of Arab medical practitioners at all levels to the battle against the corona virus. Several years ago, this picture celebrated the shared living that takes place regularly among Arabs and Jews at work, with staff from Schneider- Children’s Medical Center. In 2015 Kav Mashve initiated a Facebook campaign encouraging workers to send pictures of workplace diversity as a counter to the inflammatory and racist rhetoric which followed a spike in violence along the Gaza Strip- Israeli border.

So while there is always much more to do – and setting aside for now divisive political rhetoric – the past few years have seen unprecedented governmental, business and philanthropic investment in everything from public transportation routes to high tech industrial parks in Arab communities, from educational scholarships to professional mentoring programs, from start-up incubators to capacity building for municipalities. Over time, this seemingly radical idea of addressing inequality became mainstream, even routine. 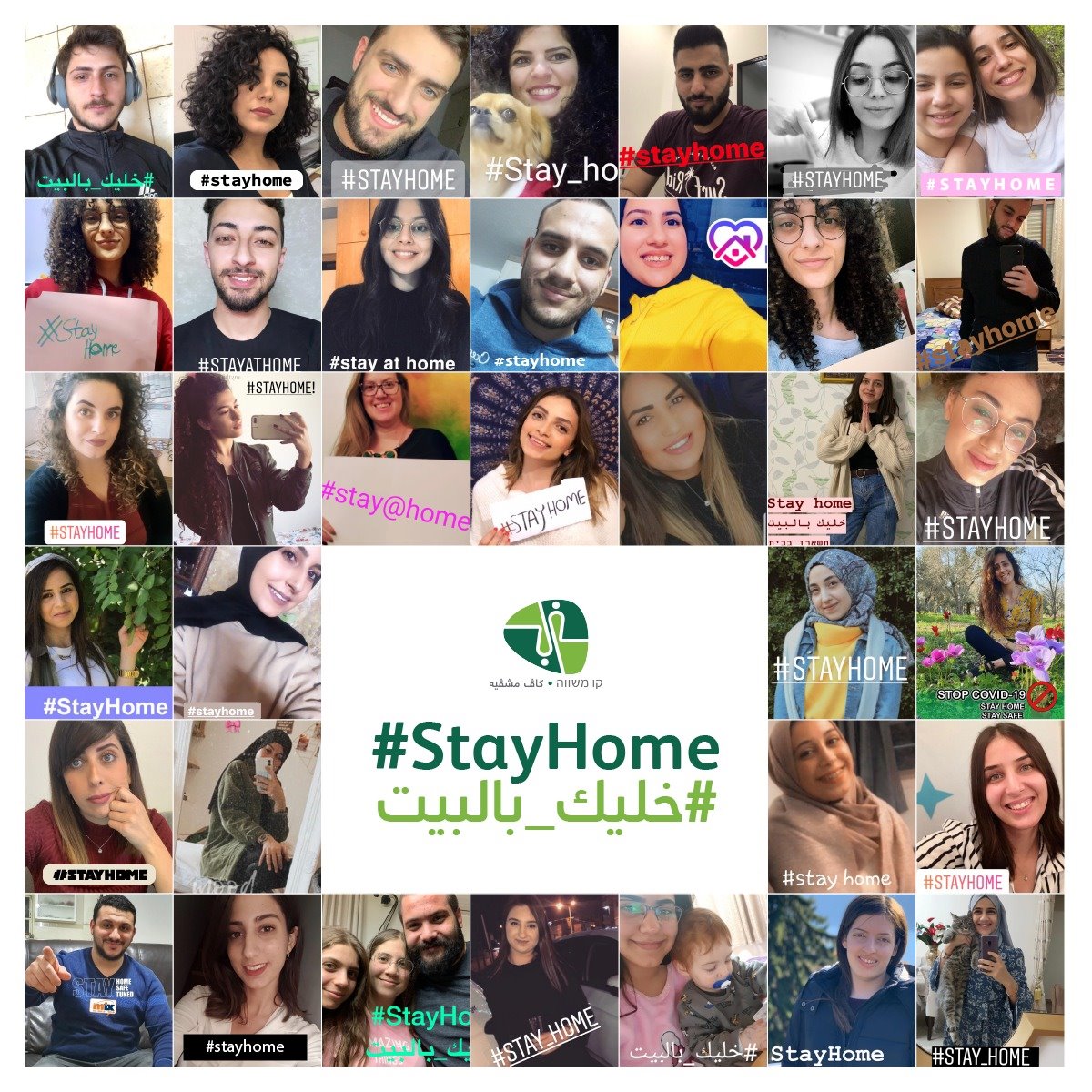 Since the pandemic, the Campus Business Clubs and other programs have moved to the online-sphere. Over the past months there have been online meetings with our facilitators, interview-marathons with experts from the field, and video-clips presented by the Kav Mashve team. An online conference on career advice with 150 participants recently took place. It was titled “Unmute Yourselves,” which as CEO Danny Gal points out, reflects a key aspect of their work and the importance of raising your voice.

We can take the example of Kav Mashve (‘Equalizing the Line’ in Hebrew), an NGO that was established in 2007. It took a new approach, serving as a much-needed conduit between Arab college graduates and the private sector. Historical and cultural factors, combined with decades of discriminatory policies, had already created many well-entrenched barriers to economic integration – including separate K-12 public education systems, separate residential communities, separate economies and social networks.  In short, lives lived in two different languages, mostly apart.

It is a long list to overcome. And so Kav Mashve got to work – offering mentorships at the high school and college level, providing skill trainings and leadership courses, and placing graduates in jobs and then, later on, helping them to thrive in the workplace. As Danny Gal, the CEO of Kav Mashve explains, each of these programs shares a common thread – a needed focus on helping participants, as members of a minority community and often first generation college graduates, find their own confidence, their own voice, and their unique added value that they can bring to any professional setting.

At the Kav Mashve offices, Reem Abu Kadra, Qamar Taha, and Maram Mireb Jubran host students and facilitators of the Campus Business Club for biotech at the Technion in Haifa. Students can join clubs on topics such as economics, law, computer science, human resources, accounting ,engineering and other fields of study. Spring, 2020.

Kav Mashve’s engagement with the private sector also focuses on a shift in practice as well as in mindset. From its early years, Kav Mashve has established a working partnership with companies around the country, building on a growing recognition of the importance of bringing greater diversity into the workforce. Over time, the question has gradually changed from ‘if’ to ‘how.’

Sami Assad, a F.O.D. himself, manages Kav Mashve’s efforts to build stronger networks between companies and leading Arab professionals in various fields. As a former CEO of a human resource company, he is well-versed in hiring and recruitment practices, framing issues in a language that is easily accessible to the business sector. 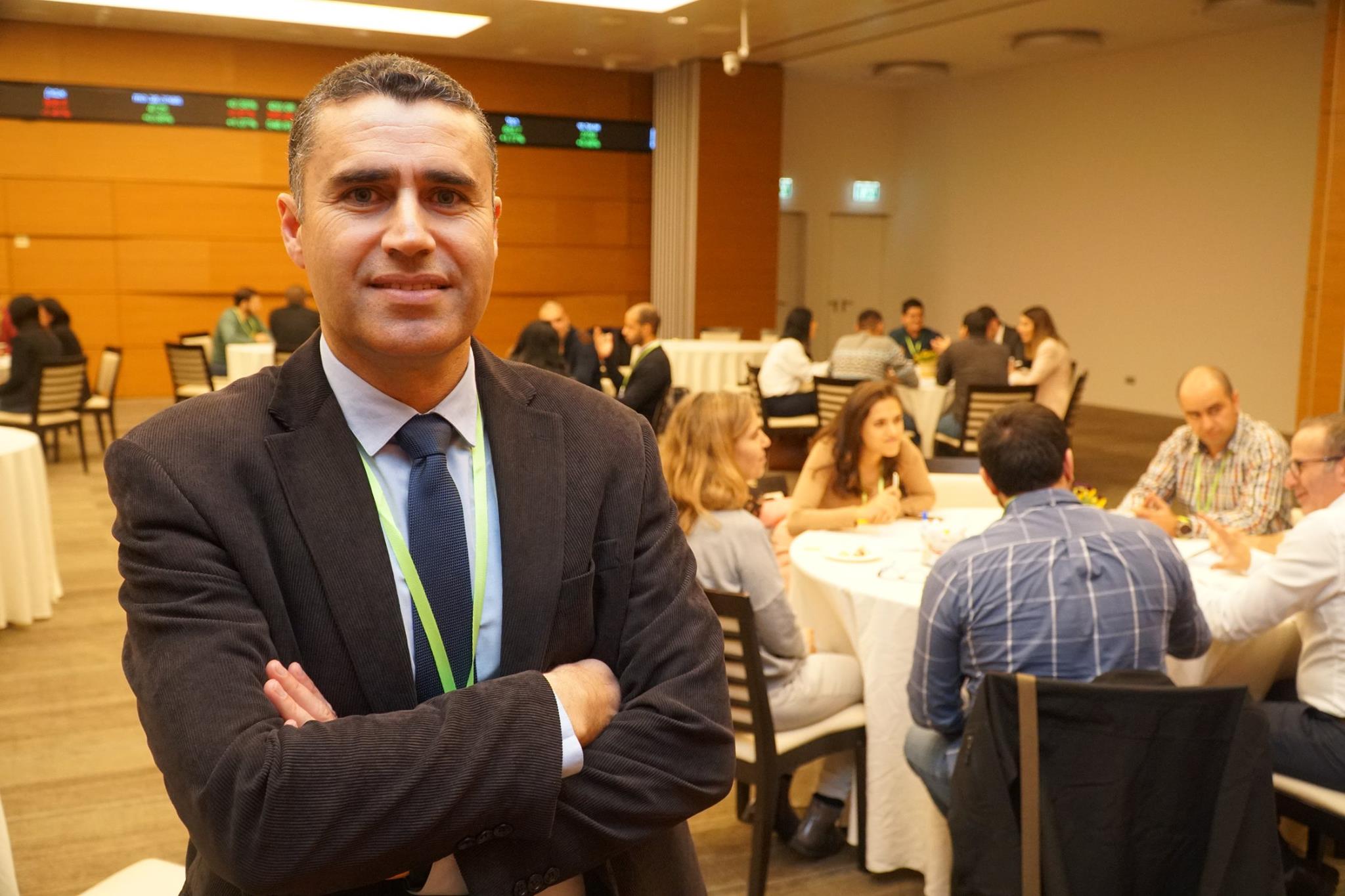 Sami Asaad at a Lead Forward event, a program that is in partnership with the Lahav Executive Development program at Tel Aviv University and supported by the Social Venture Fund. Spring, 2019.

The work of Sami and the Kav Mashve team is to build on the good intentions of many companies, providing support and guidance. Sometimes it is about taking practical steps (i.e., reaching qualified applicants by publishing job descriptions in Arabic, posting job listings beyond existing data bases or default social networks, ensuring active recruitment on campus). Other times, more cultural translation is needed. 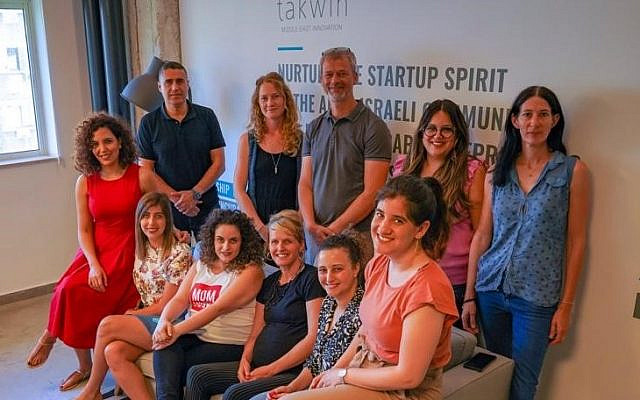 To bring diversity to their ranks, in personality traits, skills sets and backgrounds, companies have to look at all aspects of how to cultivate their workforce, especially in reaching people from marginalized communities. Many of the lessons that Kav Mashve shares with human resource units around the country, as Sami explains, are relevant not only to Arab communities, but also to other communities such as the Ultra-Orthodox or Ethiopian communities. 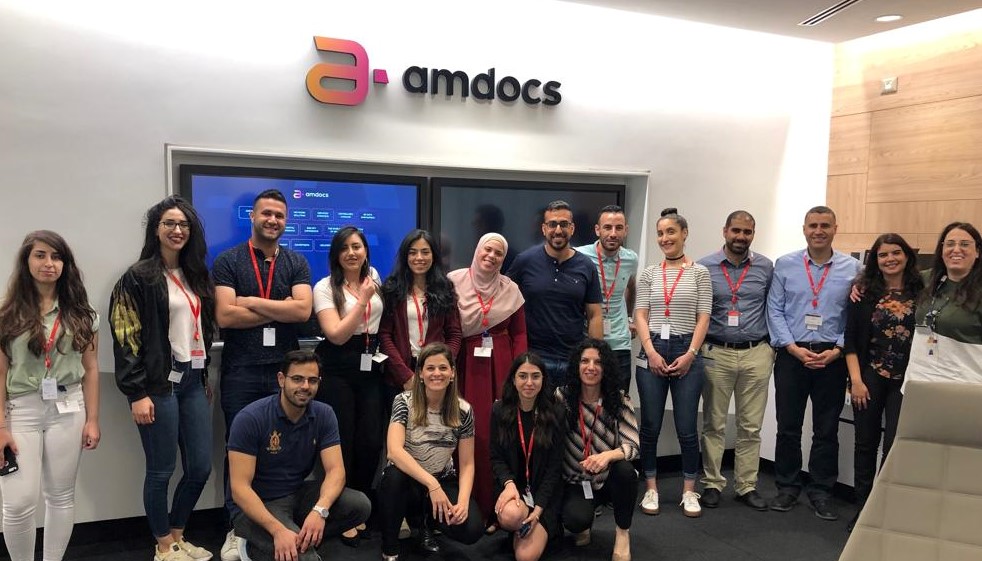 Participants of the joint Kav-Mashve and Amdocs finance bootcamp, another effort to bridge the gap between companies and Arab candidates. Fall, 2019.

For professionals coming out of more collectivist cultures, there is a unique challenge in adapting to the individualistic, risk-taking environment that is so prized in the business sector. After all, too much cohesion can lead companies to lose their edge. It is the disruption of consensus that is often welcomed and encouraged as a good business practice.

Moreover, in fast paced work environments, certain cues can be read differently- starting early on during recruitment. For example, a job candidate can wonder – how deferential should I be to those who are in positions of authority? What is being polite versus being too acquiescent? Where is the line between modestly touting my accomplishments and self-aggrandizement? 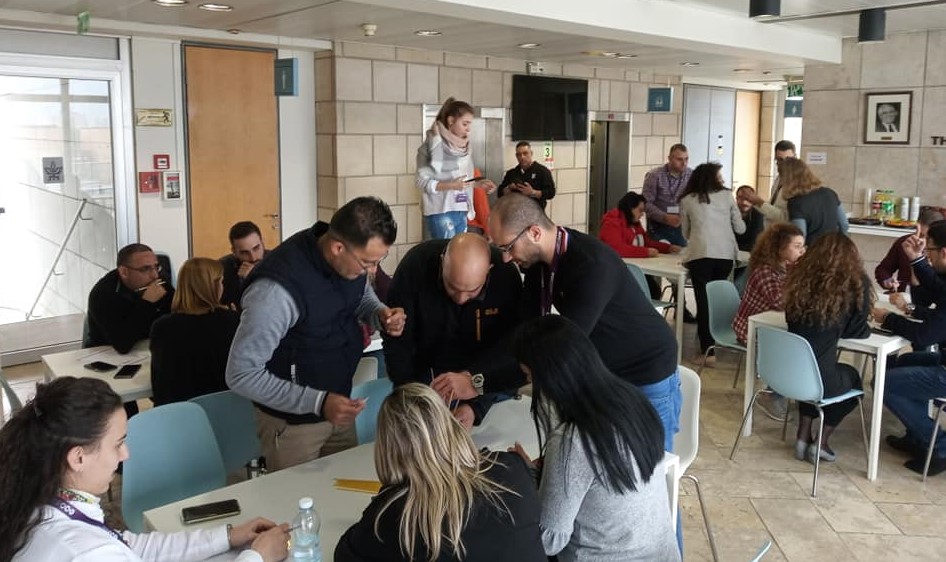 Later on, when it comes time for promotion, one can question if it is worth trying to stand out or is it better to just ‘fit in’? What is the best way to handle giving critical feedback to upper management? (And just to add complications of cultural baggage and gender stereotyping, how is it perceived differently depending on if it comes from a man or woman and/or from a member of a minority group, etc.). What is considered assertive or ‘taking the initiative’ versus too aggressive?

This is just a sample of the difficulty in navigating one’s place in a company, especially in a business that rewards non-conformity and seeks to nurture innovative, original ideas. 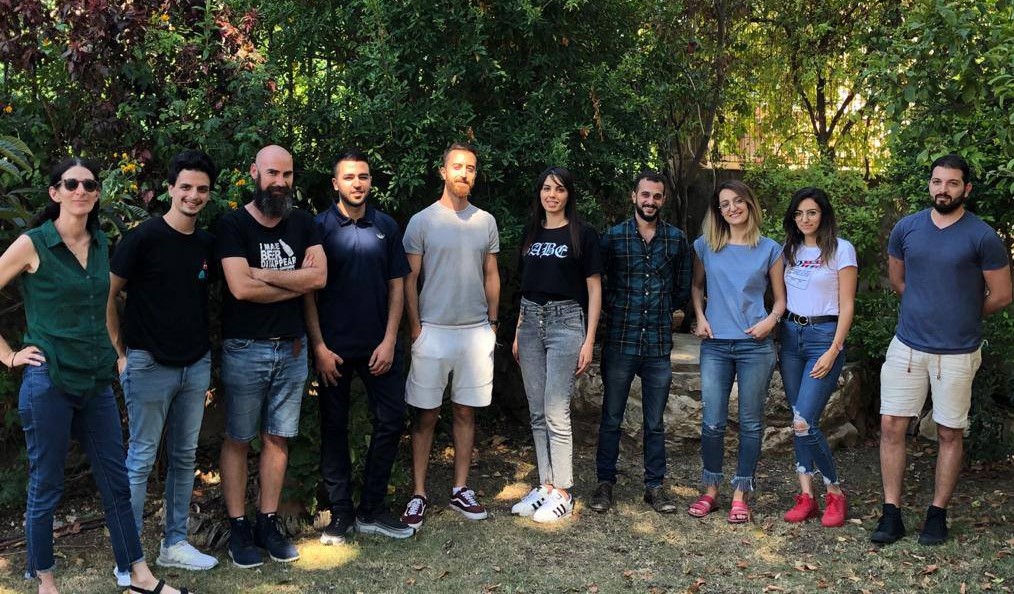 Kav Mashve is one of the organizations selected to run coding yearlong boot camps which are non-university training schemes for software developers. Sponsored by the Israel Innovation Authority, the program includes job placements for graduates. Dana Amit (left) with the new cohort of boot camp participants for Spring, 2020.

And indeed, while the hiring rate of Arab college graduates in the high-tech and other sectors has gone up dramatically in recent years, advancement to management has not budged. To address this challenge, Kav Mashve began its executive leadership course, Lead Forward, in partnership with the Lahav Executive Development program at Tel Aviv University. Its participants are able to learn from other F.O.D.s. who have also pushed the boundaries of family expectations and social conventions.

Together with practical tools for professional advancement, Lead Forward participants are given a new lens for seeing their own role in breaking barriers for their community. The network that is created with each cohort and the alumni also offers mutual support, a helpful boost as they envision for themselves an even more ambitious path to leadership and success.

Graduates of the 4th Cohort of Lead Forward, at a closing ceremony. July, 2020.

Just this past week, the fourth cohort of the Lead Forward program celebrated its graduation day. As these graduates advance in their careers, they will continue to expand what is possible for a new generation.

Kav Mashve and others are working to ensure that fewer people will need to carry the added burden of being an F.O.D. We can hope one day that the journeys of these remarkable young professionals will not be considered remarkable at all. Such a novel idea, no?