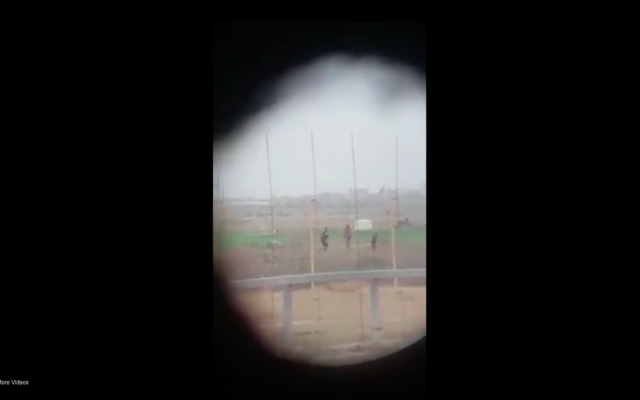 Most of my battalion had marched north and east into the overlooking ridge to drive the Syrians out of their positions. I stayed behind with the rest of command support units and in a hotel in Khalde, somewhere south of the airport. When the hill was cleared, we marched up to meet the rest of the unit. That is where we encountered the terrorist in the factory.

We, to be conservative, was something like a platoon of tanks, an anti-aircraft unit with a Vulcan cannon and assorted infantry. In short, it was a bit of a circus. A lone and distant figure in a very large build, that would flit to a window, fire a burst from a Kalashnikov, and disappear again. There some officer shouting in a bullhorn would call for the gunman to surrender, but to no avail. Here and there a Vulcan cannon (which are really multi-barrelled machine guns with 20 mm bullets) would fire a burst and then perfunctorily jam, as if even the gun itself was uninterested in participating. On a hill about 300 yards away, if not more, in the heat and humidity, surrounded by the smell of decay and rotting garbage that characterized Beirut that summer, I felt unthreatened and detached from the drama. At one point the terrorist made a break and fled the build and hid behind a dump truck. A tank summarily fired a shell and the truck was no more. Finally, after about fifteen minutes, while trying to escape in a car, a volley of fire ended the farce. One more gunman was dead. I think some of the troops cheered. I did not.

The latest video of a sniper shooting a Gazan near the border fence is causing a bit of a stir. Not so much the video as the soundtrack that accompanies it. Another soldier near the sniper and his officer was filming the area through a binocular and that is what disturbs us the most. We hear the excitement and even glee as a life some 300 to 400 yards away is snuffed out. It is difficult to hear and it feels wrong to civilian ears. And it should.

Yet, once a soldier myself — I served three years in a Nahal unit and spent the next 25 years in a paratroopers reserve unit — I find it impossible to judge the soldiers involved. The order itself, to shoot anyone reaching the fence, is both logical and reasonable. It is meant to prevent Gazans from infiltrating into Israel and to protect the soldiers guarding the border. To prevent death or injury, a Gazan has only to keep 100 yards from the fence. In the past, terrorists have used the cover of demonstrations to place IEDs (improvised explosive devices) on the fence and a month ago one such device caused serious injury to our soldiers.

Soldiers on the border are in a constant state of both tedium and stress. They watch and they wait and sometimes, and actually only rarely, they are forced to act. A sniper some 300 or 400 yards away from the fence sees people, but they seem far away and far from being people with dreams and desires. In a sniper scope, the Gazan near the fence is an enemy, a potential threat, and a target. A skilled sniper, depending on the scope and the range, can be quite accurate. But we have no information on the essentials here. We know neither who (neither sniper nor target), when, nor even exactly where.

What we do have is a damning soundtrack. An officer pointing out the target — and at one point ordering the sniper to hold his fire because a child or minor is too close to the target, a laconic sniper, complaining that he does not have a clear shot, and the spectator. The unknown soldier that appears to regard shooting a person as no different than one looking on as a hunter shoots a boar. We can and should be embarrassed. Humans are not game animals. Yet we should also not be too outraged. Did we expect someone to cry? Or have we forgotten that it is sometimes the soldier’s lot to shoot and kill?

There is a famous Golda Meir quote that comes to mind:

When peace comes we will perhaps in time be able to forgive the Arabs for killing our sons, but it will be harder for us to forgive them for having forced us to kill their sons.

Our soldiers did not choose to sit on the border with Gaza in order to prevent terrorists from infiltrating and harming our civilians. Israeli soldiers do not sneak into civilian homes to slit the throats of small children, as Arab terrorists have done all too often. Our society doesn’t lionize those who hurt the helpless. Unfortunately, our enemies both murder our children, celebrate the murders and then make heroes of the murderers. Our soldiers protect us and it is our responsibility to support them, not attack them.

Israelis pray that one day we will no longer have to shoot at those near the border fence with Gaza, but that choice is also one that the Gazans themselves must make. They can pursue peace, or, at a minimum, stay away from the fence. As Golda said, “Peace will come when the Arabs will love their children more than they hate us.”

About the Author
Shlomo Toren has been a resident of Israel since 1980, and a transportation planner for the last 25 years. He has done demand modeling for the Jerusalem Light Rail and Road 6. He is married to Neera and lives in Shiloh.
Related Topics
Related Posts
Shlomo Toren
Comments