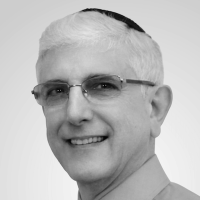 The Blogs
Richard S. Messing
The Ethic of Human Repair
Apply for a Blog
Please note that the posts on The Blogs are contributed by third parties. The opinions, facts and any media content in them are presented solely by the authors, and neither The Times of Israel nor its partners assume any responsibility for them. Please contact us in case of abuse. In case of abuse,
Report this post.

Even though I’m a devout monotheist and you’re a devout atheist, I do have some affection for you, solely because you desire to be righteous, “to put things right”, as you say in the following excerpt from Sophie Elmhurst’s article, Is Richard Dawkins destroying His Reputation?,

For Dawkins, the science has always come first; his atheism is simply a natural extension of a lifelong quest to do Darwin’s work on Earth. As for the suggestion his public interventions over the past few years have done more harm than good – both to himself and his cause: “That does worry me,” Dawkins conceded, and yet he cannot quite resist the urge to wade in. “I think there is a curious desire in humans, maybe not all humans but certainly in me, to put things right,” he said. “There’s a joke in the New Yorker or something like that, of a man at a computer. It’s obviously very late and his wife is begging him to come to bed. He’s saying, ‘I can’t come to bed. Somebody’s wrong on the internet.’”

You are right to be worried, because like the man in the joke, you can’t seem to rest.  Like all self-serving genes that are driven to survive through replication, you are driven to replicate your atheistic self.  According to your own description of genetic evolution, the atheism gene has chosen you to be its chariot.  It is pitiful to see a brilliant scientist fall victim to a pernicious desire to prove the unprovable.  Clearly, being a scientist was not fulfilling enough for you, to such an extent, you were driven to step outside your field of expertise, science, into the field of faith, about which you have no discipline nor authority.  The genius of atheism fooled the genius of science.

The problem is not ignorance. The problem is the ignorance of ignorance, ignorance squared.  No one can know everything about everything, so inevitably we are all ignorant of something.  When we know we are ignorant, at least we can choose to educate ourselves.  But when we are ignorant of being ignorant, when we don’t know what we are ignorant of, we fall. I’m confident you and anyone else reading this would agree that no one yet fully understands human nature – that all of us humans, including you, are ignorant to varying degrees about our own nature.  You know you can’t be certain G-d doesn’t exist, no more so than anyone can be certain G-d does exist, so why can’t you admit atheism is just another belief system, a faith you adopted despite the fact that atheism, like monotheism, is impossible to prove.

Remember Charlie Hebdo, the satirical magazine headquartered in France, the western civilized country most populated by radical Islamic terrorist cells?  Surely, Charlie Hebdo employs well educated, well-meaning, highly ethical people, like you, who are trying to change the world for the better, who are supposed to have insight into the human condition upon which all satire is ultimately based.  So one day Charlie Hebdo chose, in the name of satire and free speech, to repeatedly publish ugly cartoons of the Islamic prophet Muhammad, attempting to ridicule the religion of a  few billion people, a very small percentage of whom hide-out in France.  Should anyone have been surprised, on that fateful day, when two Islamic terrorists invaded the Charlie Hebdo office and assassinated most of their employees?  Was it not the height of stupidity to repeatedly ridicule the sacred prophet of so many people, knowing that radical Islam kill for far less?   Did Charlie Hebdo not know that disrespecting the religious beliefs of others is undignified, and that ridiculing the sacred is hateful?  Being self-righteous is just as dangerous no matter which side of hate you are on.  It was the ignorance of our own nature that taught the tragic lesson of Charlie Hebdo.

With absolute abandon, the infamous second chapter of your book, The God Delusion, foreshadows Charlie Hebdo.  That your words so flagrantly and cavalierly defame G-d, that which is sacred to billions of people, undermines your credibility.  Even if you are right that G-d does not exist, how foolish it is to ridicule people on matters of faith, which unlike matters of science, you know, cannot be proven.  But Charlie Hebdo proved that such foolishness serves to incite hate.  And as ancient idolatry led people to defecate on their idols and engage in public orgies, atheism leads you to relish the recitation of foul “love letters” on the internet – to prove what, that you are capable of eliciting hate from some fringe religious fundamentalists?  This is the reason religious monotheists indoctrinate their children, so they don’t grow up depraved.

Your comrade, Steven Pinker, in his article The Moral Instinct, saw fit to throw Saint Mother Teresa under the bus, by suggesting humanity would have been better served had she followed Bill Gates instead – and Pinker suggests that the funds given to her by the Church, which made possible the daily bestowal of lovingkindness upon thousands of poverty stricken starving children, were poorly spent.  It is fascinating to observe how the gene of atheism used Professor Pinker to express itself, leading a brilliant and gifted scientist to cleverly diminish the work of a saint, as the applause from his TedTalk audience blinds him of his folly.  He will be remembered as the Harvard psychologist who spent his intellect and ego trying to persuade humanity that the world would be better off without the sacred, the divine and the holy.

There is always a kernel of truth in every joke.  Like the man at the computer in your joke, something is wrong when a highly acclaimed scientist finds it funny to make public his disgusting, hateful ‘love letters’.  Something is wrong when a Harvard psychologist suggests, in his moral argument, that the holy work of lovingkindness is not worth the money.  Both are good secular ethical people, highly educated, well-meaning atheists who strongly believe it is righteous to place one’s faith solely in the rituals of science.  “Not that there’s anything wrong with that,” depending, of course, on what kind of human being a person is proud of becoming.

P.S.  In the last line of The Moral Instinct Pinker quotes Anton Chekhove, “Man will become better when you show him what he is like.”

About the Author
People are seeking greater meaning, freedom and growth in their personal and professional lives. Because the source of freedom, meaning and growth is poorly understood, they are often difficult to achieve and maintain. For this reason, in 2004, Richard Messing embarked on a research project culminating in The Ethic of Human Repair, the intellectual property that documents the underlying principles and methods that describe, explain and solve chronic personal or organizational problems where human freedom, meaning and growth pertain. Richard is a published writer, invited conference speaker and thought leader on the human condition in general and free will in particular. In 2019, Richard formed Kotel Group LLC, an ethics-based business consulting firm, to rehabilitate and transform chronically underperforming for-profit or non-profit organizations that resist conventional management interventions and methodologies.
Related Topics
Related Posts
Comments