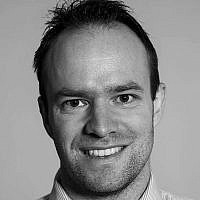 The Blogs
Anders Persson
Political scientist, Linnaeus University, Sweden
Apply for a Blog
Advertisement
Please note that the posts on The Blogs are contributed by third parties. The opinions, facts and any media content in them are presented solely by the authors, and neither The Times of Israel nor its partners assume any responsibility for them. Please contact us in case of abuse. In case of abuse,
Report this post. 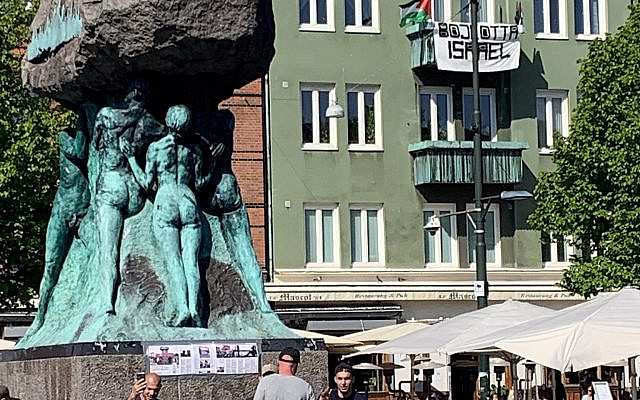 The Möllevången square in Malmö after the latest escalation between Hamas and Israel, May 2021. Photo by the author.

The Mohammed cartoons closed down the debate and made people afraid of discussing issues about Islam. There is now a big risk that IHRA’s definition and examples of antisemitism will go down the same path.

Every time I raise the issue of the Mohammed cartoons at Swedish universities I literally fear for my life, which is the reason I seldom do it. It is, of course, difficult to measure the amount of self-censorship on this issue among me and my teacher colleagues, but it is probably big. The Mohammed cartoons were without a doubt last decade’s big challenge to freedom of speech in Sweden and indeed in much of the Western world.

The new definition of antisemitism with its eleven examples from the International Holocaust Remembrance Alliance (IHRA) has many similarities with the Mohammed cartoons. Both come from Scandinavia, both are about majority-minority relations in Western societies, about open historical wounds, about Western relations with the Middle East, about that the conflicts from the Middle East are being played out here, and both create enormous emotions. Most importantly, both the Mohammed cartoons and IHRA cut like a knife into failed immigration policies in Western Europe, thereby becoming political tools as well as political footballs for different purposes.

The Swedish city of Malmö will be hosting IHRA’s big conference International Forum on Holocaust Remembrance and Combating Antisemitism on October 13. IHRA was from the beginning a Swedish initiative started by our former Prime Minister Göran Persson in the 1990s. It was for many years a small organization far away from the political spotlight, but this changed in 2016 when IHRA adopted a new definition with eleven accompanying examples of antisemitism, seven of which were related to Israel. A long list of actors, from organizations like the EU, to 34 member states, to businesses and sport clubs, have adopted IHRA’s definition and examples. Alongside the mainstreaming of its definition and examples, the critique against IHRA has grown. Beside the definition being too vague and the examples too focused on Israel, a growing list of critics are arguing that IHRA is becoming a serious threat to freedom of speech. To make long arguments short, it is possible to identify six different threats that IHRA poses to freedom of speech.

First, IHRA is now being used to abuse and silence factually correct criticism of Israel. The best example of this is probably what happened to former Swedish Foreign Minister Margot Wallström after she factually correctly stated in 2016 that Israel was committing extra-judicial killings of Palestinians. When googling “Margot Wallstrom” plus antisemitic today, one gets over 20.000 matches, clear evidence of how IHRA is used to abuse and silence criticism of Israel.

Second, IHRA is becoming increasingly mainstreamed in laws, education and practices among its member states, despite proponents claim that it is legally non-binding.

Third, IHRA’s example number seven that it is antisemitic to claim that Israel is a racist endeavor clearly goes against the spirit of the times we are living in where progressives raise claims of institutional racism against almost all Western countries.

Fourth, IHRA is already part of cancel culture whereby pro-Palestinian groups have their events cancelled, even in places where IHRA is not legally binding.

Fifth, IHRA risks becoming a big threat to freedom of speech on social media, one of the themes of the conference in Malmö. The Israeli government and right-wing NGOs’ have over the past two years tried to convince Facebook and Google to adopt labels on content that goes against IHRA’s definition and examples.

Finally, IHRA is a threat to freedom of speech because several of the examples of antisemitism clash head on with where the debate on the Israeli-Palestinian conflict is at the moment: accusations of Israel being an apartheid state, comparisons to settler colonialism, various initiatives for equal rights and a one-state solution, and a more critical view of Zionism.

IHRA’s ambition to combat antisemitism, including the one related to Israel, is praiseworthy and something I myself often try to contribute to. At the same, it is important to raise the problems surrounding IHRA’s definition and examples, issues that very few in Europe and the US are aware of or has knowledge about. When it comes to the road ahead after the conference in Malmö, it is important that governments reflect critically before implementing IHRA’s definition and examples in laws, education and practices. Another way forward is for governments and others to highlight two other more nuanced initiatives for defining antisemitism, Nexus and JDA, and use these together with IHRA.

The big lesson 15 years after the Mohammed cartoons is that they closed down the debate and made people afraid of discussing issues about Islam. There is now a big risk that IHRA will go down the same path.

Anders Persson is a political scientist at Linnaeus University, Sweden, specializing in EU-Israel/Palestine relations. His latest book, “EU Diplomacy and the Israeli-Arab Conflict, 1967–2019,” was published by Edinburgh University Press in 2020. Twitter: @82AndersPersson