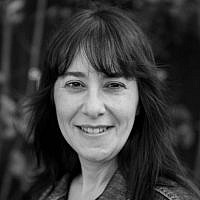 The Blogs
Angie Jacobs
Apply for a Blog
Advertisement
Please note that the posts on The Blogs are contributed by third parties. The opinions, facts and any media content in them are presented solely by the authors, and neither The Times of Israel nor its partners assume any responsibility for them. Please contact us in case of abuse. In case of abuse,
Report this post.

I encouraged her to go. I had done a similar course with FZY in 1984 and had had the time of my life. I wanted her to have the same rich experience.

She wasn’t sure. Unlike me she was a very hard worker and thought it might be best to get all of her studies out of the way. I urged her to go. She deserved it.

She’s now gone and I am bereft. I’ve cried my soppy eyes out for the last four days. However, I still maintain that she will have the most amazing year of her life. She will learn about Israel, its history and culture, its politics and people. And she will learn about herself through the friendships and relationships that she makes.

My tears are purely selfish. But she’s my precious daughter and I’ll cry if I want to.

This last year has been a difficult one. She hadn’t been feeling well but nothing showed up on any tests. By the first week of November she was very weak. By the second week she was in hospital with diabetic ketoacidosis. It was a cruel blow. Diabetes a condition that she would have to endure for the rest of her life. It knocked her down. It knocked us all down. But in the words of the song, she got up again. She learnt how to manage the practicalities of the condition and her strong spirit and determination got her back to school. It was tough going, but slowly slowly she began to feel a little better and life resumed some sort of normality. The gap year was was never totally off the menu. In a way, for her I wanted it more than ever. In December, we went to a gap year fair to learn about the different programmes. I couldn’t get a decent parking space and she had to have a little rest on the walk to the community centre. Once there, the bright lights bothered her. However, she listened as the promoters peddled their wares and there were another 8 months to go in which she would get stronger.

During the next couple of months her decision was made. Too right she’d take a gap year to Israel with FZY/Young Judea, even if it was Mum who’d suggested it.

I was philosophical. Yes I’d miss her but it would be far easier than my parents had it in 1984. Then, they would have to painstakingly wait for those fiddly blue aerogrammes that took so long to fill. Now it’s all WiFi shcmi-fi and the communicating/stalking possibilities are endless.

I started with the tears about a week before her departure. At first just the quick blub in the car on the way to work. But by Friday, they were really becoming inconvenient. The slightest thing would set me off and my poor colleagues bore the brunt. (The CEO of our organisation, a lovely guy, had a very near miss in the communal kitchen. Almost rudely I didn’t make eye contact with him for fear that he would ask me how I was.)

Lighting the candles for Shabbat was the worst. My son, who is 15, persistently plays up — no kippa, texts in the middle of V’yehi Erev, break dancing, you name it — with his immature mother often getting the giggles. This week as I started to bawl, he let out a solitary “OMG” and then moved in for a four-way family cuddle. Saturday I cried on the phone with my mum, in person with my sister and consistently with Ilana in my arms. I didn’t return my friends’ calls. It just wouldn’t have been fair. Departure day arrived and because the flight wasn’t until 10.30 pm there was time to fill. The two siblings, my Gruesome Twosome, my Unpleasant Adolescents took themselves off, with my 20 quid, to Hampstead for breakfast. NOW, they start to like each other!

The males in the family reacted in their own ways. My husband went into his shed, got his tools out and made her a strap for her water bottle. My son tidied his room.

The rest of the day passed and I felt somewhat calmer. Ilana was in a great mood by now and her joy helped me get through …. until we got to the airport. I cried more than the whole of the terminal put together and so amused was my son that he felt it acceptable to chase me around filming me on his phone. I’m probably going to go viral.

When I woke this morning I felt a little easier. I’ve seen her face on Skype and she is all happy and gorgeous.

I’m trying to focus on the benefits of her not being at home, but all I can come up with is being able to find a drinking glass, being able to find a hook on which to hang up my jacket (she takes up 4), less mess, washing and ironing, shorter queue for the bathroom, being asked a question a third less times when I am in the bathroom, the clip on the bread bag being fastened and ….. oh, that’s it about it.

So now we are three for the next nine months. It will be okay and she will have a blast. We will miss her but will enjoy her great adventure vicariously. The time will go quickly and by June she’ll be home. And then it’s off to Uni in Leeds. Oy.

About the Author
Author of Two Kids One Bathroom for The Jewish News. (Oh and there's a husband too.)
Related Topics
Related Posts
Comments