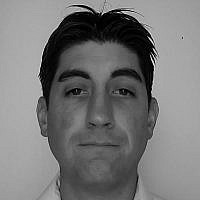 The Blogs
Ryan Gardiner
Apply for a Blog
Please note that the posts on The Blogs are contributed by third parties. The opinions, facts and any media content in them are presented solely by the authors, and neither The Times of Israel nor its partners assume any responsibility for them. Please contact us in case of abuse. In case of abuse,
Report this post.

Representative Ilhan Omar’s latest comments intentionally lumping Israel and the United States with terrorist groups not only further demonstrate her reprehensibility, but more so a surprising acknowledgement that Hamas is indeed a malevolent force. By placing Israel on par with a malevolent terrorist group, she has once again demonstrated her ability to adapt her own narrative regarding Palestinian groups, but still keep Israel in her crosshairs.

The comments made over Twitter last week are nothing new in terms of her vitriolic lambasting of Israel (and American military action), but it is clear she read the tea leaves over the course of the past month’s war between Israel and terrorist factions in Gaza. Those tea leaves increasingly noted that Hamas was a US government-listed terrorist group that engaged in a campaign intentionally targeting civilians with rocket attacks while using its own civilians as human shields. It was also reported that Hamas violently blocked an effort by the UN to provide assistance to Gaza. Therefore, Omar went out of her way to specifically acknowledge Hamas as a terrorist group and one that deserves International Criminal Court attention, but craftily found a new way to de-legitimize Israel (and the United States) by equating them with that same terrorist scourge.

Omar may be sinister and disgraceful in her statements, but she is undoubtedly intelligent when it comes to public affairs and handling of the media. The tepid request for clarification from opponents in her own party, and vocal support from the progressive wing and twitter followers in response to her latest tweet demonstrate that keen understanding. Her same detractors will continue to dislike her brand of politics while her supporters and cheerleaders will grow and have her back.

Despite the short-term blowback she at times receives from those detractors in her own party and among conservatives, she remains unwilling to back down and it has paid off. The meek response by some Jewish members of Congress, a refusal by her party leadership to act, and continued media and social media support of her as one of the two first Muslim Congresswomen and a woman of color have emboldened her and once again vindicated this shifting and confrontational approach.

It is therefore unlikely that we have heard the last from Representative Omar on Israel and her seemingly digestible version of anti-Semitism. It should not be too much to ask for our Jewish members of Congress, at least the ones willing to actually stand up, to adapt their tactics as well and speak as a unified voice.

About the Author
Ryan Gardiner, a Navy Veteran and 2016 Presidential Management Fellow, previously served as Managing Editor for Harvard Kennedy School's Journal for Middle-Eastern Politics and Policy in 2016, and an Assistant Managing Editor for Young Professionals in Foreign Policy in 2020. His previous works can be found in the National Interest and in Small Wars Journal.
Related Topics
Related Posts
Comments
Advertisement