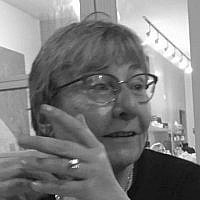 The Blogs
Michelle Mazel
Apply for a Blog
Advertisement
Please note that the posts on The Blogs are contributed by third parties. The opinions, facts and any media content in them are presented solely by the authors, and neither The Times of Israel nor its partners assume any responsibility for them. Please contact us in case of abuse. In case of abuse,
Report this post.

Rejection and hatred of Israel as the main factor of antisemitism?

Reeling from the impact of the fifth wave of the Covid pandemic and embroiled in political squabbles, Israel has paid scant attention to startling and unwelcome revelations about antisemitism in France. On the eve on International Holocaust Remembrance Day, popular French daily Le Parisien published under a blaring headline  – “Anti-Semitism, Fear on a Daily Basis” – the findings of Radiography of anti-Semitism in France – 2022 [i] a  survey   carried out by IFOP, the leading French institute for opinion polls and market research, commissioned jointly by Fondapol –a French think tank for European integration and free economy– and the American Jewish Committee. Here are some of the findings.

“From the yellow stars worn by demonstrators opposed to the health pass to the use by some of the pronoun “who” used to denounce the supposed stranglehold of the Jews on the main media, without forgetting the notion of a Jewish conspiracy brought up to date to explain the coronavirus pandemic, the year 2021 was marked by the multiplication of anti-Semitic incidents.”

85% of   French   Jews   believe that antisemitism is widespread and 73 % that it has grown over the past decade.    Not a great surprise for those who have been following the increasingly fraught situation in France and the escalation of verbal and physical attacks against Jews. ‎But there are others, infinitely more troubling findings.

Far right ideology and conspiration theories are no longer a major factor in antisemitism in France; they have been replaced by what the survey calls “contemporary” forms of that scourge.  But it is not cause for rejoicing. Thus, to   the question “What are, in your opinion, the first and the second causes of antisemitism in France,” 53% of all respondents and 62% “respondents of the Jewish Faith or culture” answered “rejection, hatred of Israel.”  Israel as the main factor of French antisemitism? How did we get there?

And yet a mere three years ago, a similar survey had given a completely different picture.  The long established, traditional answer, “prejudice against Jews” was still perceived by 58% of the general public as the main cause of anti-Semitism in France   ahead of Islamism (36%) with 45 % of French Jews putting Islamism in first place before prejudice [42%].   “Anti-Zionism, that is rejection of Israel” came far behind with 19 and 15% respectively.

French president Emmanuel Macron, poised to launch his bid for reelection to a second   mandate made a surprising declaration the following day. The fight against antisemitism, he said, was unfortunately back in the spotlight because “ill winds were blowing anew.” French Jews were nonplussed. What did the president mean?  What ill winds? More to the point, “Back in the spotlight”, this fight? When had it left center stage?  Had it become past? Useless? In a word, obsolete, anti-Semitism having disappeared during the five years of his presidency? It appeared unlikely   given the constancy if not the increase in “incidents” and “incivilities” not to say violence of an anti-Semitic nature.     Hadn’t the president read the new survey, which his services must have communicated to him? More to the point, how did he intend to carry out the fight against antisemitism and dispel the ill winds suddenly blowing anew?

If reelected, would he try to do a better job addressing the two primary causes of antisemitism that spiked on his watch?   Regarding the impact of Muslim ideas, would he impose tighter supervision on Islamic teaching? Control and if necessary block dozens, even hundreds of Islamic channels and radios pouring out their messages of hatred day and night?  Do the same with the fiery Friday sermons broadcast from thousands of mosques and clandestine places of worship scattered across the territory?    At the very least strengthen the surveillance of suspected terrorists?    Combine these actions? At the same time, actively pursue a change of legislation so that someone who tortures and throws through the window to her death a defenseless Jewish widow does not escape retribution because he was stoned out of his mind at the time – as was the murderer of Sarah Halimi?

And what about the incredible, the surprising first cause of anti-Semitism: the rejection of Israel.   How to explain the surge of anti-Israeli sentiments from less than 20% in 2019    to triple than number   in the course of the Macron presidency?  Could it be solely due to relentless media onslaughts on the Jewish State, indiscriminate use of loaded words such as “resistance” to describe terror attacks against women and children? One sided if not outright false reports about the conflict, loving close-ups of bare-breasted Gazan “Freedom Fighters” defying the hated “Zionist enemies” in voice-overs which somehow failed to mention Hamas’ oft repeated oath to wipe the Jewish State from the face of the earth and establish a rejuvenated Islamic Califate on its ruins?  Party leaders marching in front of street demonstrations behind banners praising the BDS movement which openly proclaims that “From the River to the Sea, Palestine will be free,” another blueprint for the destruction of Israel … in short, the increasingly blurry line separating “anti-Zionism” from antisemitism?  Then one cannot ignore the impact of Islamic terror attacks in France, touted as demonstrations of support of Palestine and against Israel’s alleged crimes.

Of course, the president could claim that his hands are tied because freedom of expression is enshrined in the French constitution. But what about official French policy? Would it be so wrong to characterize it as inimical to Israel?  Take for instance the 12 May 2021 statement by French Minister of Foreign Affairs Le Drian on the eve of Operation Keeper of the Walls launched in response to missiles fired on the capital of Israel by Hamas in Gaza.  “In less than 15 years, the Gaza Strip has been the victim of three deadly conflicts. Everything must be done to avoid a fourth one.” Doesn’t that sound as if Gaza is the victim, Israel must be the culprit?  Worse came on May 23 with the minister warning against « the danger of apartheid in Israel should a two-state solution not be implemented.”

It is unfortunate but hardly surprising. The Quai d’Orsay does not miss an opportunity to hector the Jewish state.   France not only regularly votes in favor of resolutions targeting Israel in all international bodies but refrains from making its voice heard on issues such as the historic links between the Jewish people, the Temple Mount and other Jewish holy sites.  This systematic if insidious bias goes a long way to promote the rejection or hatred of Israel noted in the survey.

What, if anything, can be done to reverse that dangerous trend? Hard to say, though anything would be better than the deafening silence from Jerusalem.

About the Author
Michelle Mazel was born in France. A graduate of the Institute for Political Science of Paris and of the Law school of that city, she was a Fullbright scholar to the United States. She married an Israeli diplomat and for forty years, until he retired in 2004, she went with him from one interesting country to another, witnessing Sadat’s assassination in Cairo and the fall of Ceausescu in Rumania. She is the author of several thrillers and two sagas published in English and in French and regularly write for French sites.
Comments