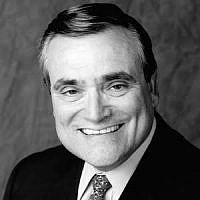 The Blogs
Steven B. Nasatir
Apply for a Blog
Please note that the posts on The Blogs are contributed by third parties. The opinions, facts and any media content in them are presented solely by the authors, and neither The Times of Israel nor its partners assume any responsibility for them. Please contact us in case of abuse. In case of abuse,
Report this post.

JTA — There are many important endeavors already underway to combat the Boycott, Divestment and Sanctions movement, or BDS, as the Anti-Defamation League’s Abraham Foxman argues in his recent JTA op-ed. From educating and mobilizing our own community to engaging non-Jewish leaders and institutions, much work is being done.

But still more needs to be undertaken – some of it in national and local legislatures.

Illinois recently became the first of hopefully many states to pass an anti-BDS law with real teeth. Under the law, the state will divest its pension funds from foreign companies that boycott Israel. This landmark bill has generated much interest nationwide, but some in our community are concerned that it may violate the First Amendment. It does not.

There was no First Amendment encroachment when Illinois divested its pension funds from companies doing business with apartheid South Africa, with Sudan for its role in the genocide in Darfur, or with Iran for its illicit nuclear program. Congressional legislation punishing American companies for participating in the Arab economic boycott was challenged but upheld by the courts. And other cases across the country, here in Illinois and even in the US Supreme Court, affirm that this legislative approach is constitutional.

The Illinois law does not subject foreign companies boycotting Israel to civil or criminal damages. They are free to conduct business in Illinois and secure contracts with the state itself. Whatever free speech rights that non-US companies have in this country are not curtailed. The State of Illinois simply won’t underwrite their operations.

The Illinois anti-BDS bill passed with zero votes against. All the caucuses — Republican and Democrat, black and Latino, urban and rural — came together in strong support. It even enjoyed the co-sponsorship of an Arab-American state senator. The bill was first introduced (and passed) by the state Senate’s Judiciary Committee, which identified no federal or state constitutional issues. Even the Illinois branch of the American Civil Liberties Union, which raised objections to an earlier version of the anti-BDS bill, did not oppose the measure in its final form.

Of course there are many routes to fighting BDS, including strengthening economic, academic and cultural ties among US companies, universities, and other public and private institutions. Legislative initiatives are another crucial route that deserves our community’s enthusiastic support.

For our part, we’re seeking to replicate our statewide success on the county and local level throughout Illinois and to assist other communities to do the same across the country. We’re also strongly supporting the bipartisan bill by US Rep. Peter Roskam, an Illinois Republican, linking the new free trade agreement with Europe to non-participation in the boycott of Israel.

“If [European] countries want free trade with the US, they can’t engage in politically motivated boycotts against Israel,” Roskam argued in a May 25 op-ed in The Wall Street Journal. “These same principles were successfully negotiated into US free-trade agreements with Bahrain and Oman in the mid-2000s, prompting both countries to end their boycotts of Israel.”

It is of paramount importance to all citizens to safeguard the First Amendment. But neither Roskam’s federal bill nor our state law runs afoul of those cherished rights. In the face of the BDS movement, legislators are simply determined to stand with a key US ally and to align our values with our investments and trade policies.

About the Author
Steven B. Nasatir is president of the Jewish United Fund/Jewish Federation of Metropolitan Chicago.
Comments