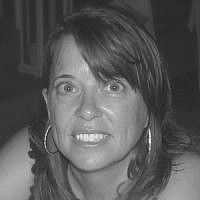 You may be a Christian, Buddhist, Hindu, Shinto or Sikh and go about your day, most everywhere, without having to worry that you have a bull’s eye pinned to your head, but if you’re a Jew, you’re a target. That’s the truth. Want proof?

France, 9/01/15 – Jews shopping in a kosher supermarket in Paris – targets for Islamic extremists.

Australia,  06/08/14 – Jewish children riding on a bus in Sydney – targets of anti-Semitic taunts of “Heil Hitler”, “Kill the Jews” and violent threats by underage males.

England, 30/12/14 – A Jewish neighborhood in Stamford Hill, London – targeted when swastikas were painted on more than 20 cars, walls and windows.

Greece, 23/12/14 – the Jewish cemetery in Larissa vandalized with anti-Semitic graffiti including swastikas and the slogans “Juden” and “six million more.”

USA, 18/11/14 – Williamsburg, Brooklyn, an Orthodox man was targeted when he was beaten with his own umbrella by three attackers who called him a ‘dirty bloody Jew’ and a ‘f…ing Jew.’

Ukraine, 26/01/12 – a Jewish man was attacked on his way home from synagogue – the third target of such an attack in two weeks.

I could go on with more examples of anti-Semitic incidents from all corners of the world which have risen in many countries by 40% this year. I could gather testimonies from Jews who have to think about whether it’s safe to go out with a recognizable Jewish symbol such as a kippah, Star of David, or the clothing of an Orthodox Jew.  I could talk about Jews who ‘dare’ to pray in a synagogue, buy food in a kosher deli, visit a Jewish museum, attend a Jewish school.   I could tell the stories of Jews, who may love or hate Israel and its policy towards the Palestinians, but who find themselves involuntary spokesmen for everything Israel has ever done in front of an ad hoc public jury who is deaf to anything but its own truth.

The dramatic rise in anti-Semitic attacks in Europe in particular, but also world-wide is sickening, but worse is the apathy with which anti-Semitism is accepted and even justified because of Israeli government policy. Israel is at war with the Palestinians, so there is free range on Jews everywhere in retaliation?

It’s not enough for governments, NGO’s and leaders to condemn, express regret, up surveillance or increase policing.  These are just superficial acts of plastering over a festering wound.  Anti-Semitism needs to become as politically incorrect as the golliwog and that dreadful word ‘nigger.’  It needs to be treated at the core; in education, in the media, in religious leadership.

We need to see hashtags like #illridewithjew and #je suis juif coming spontaneously from non-Jews and we need to see vandalized synagogues and Jewish property being love-bombed.  We need to see more inter-religious projects between Jews and Muslims in particular, but also with every other religion.  We need to see a stronger response from players like Facebook in dealing with anti-Semitism and hatred in general on social media, but above and beyond all, we need to preserve and defend Israel, as a safe haven for Jews should all else fail.