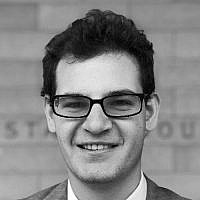 The Blogs
Shauli Bar-On
Apply for a Blog
Advertisement
Please note that the posts on The Blogs are contributed by third parties. The opinions, facts and any media content in them are presented solely by the authors, and neither The Times of Israel nor its partners assume any responsibility for them. Please contact us in case of abuse. In case of abuse,
Report this post. 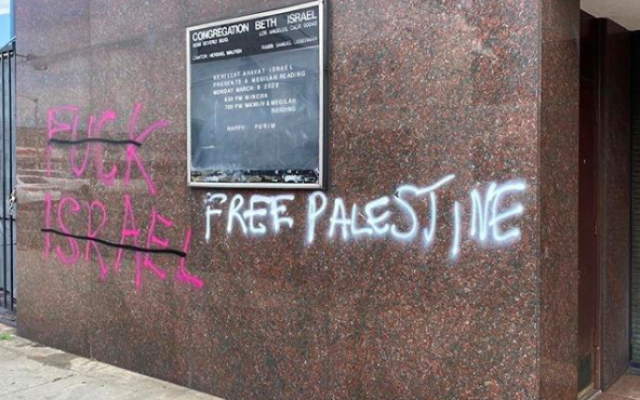 Vandalizers sprayed graffiti on the walls Los Angeles' Congregation Beth Israel synagogue after the May 30 riots. (Photo by Lisa Daftari via Twitter)

The country is in turmoil, and Los Angeles is a major hub for Americans actively fighting police brutality. Most protesters have good intentions, but some have taken advantage of the disorder to taint the message of the majority. One example is the perpetrator who vandalized the Congregation Beth Israel synagogue in Los Angeles by spraying graffiti messages saying “F*ck Israel” and “Free Palestine.”

There is no need to go into the history of Jews standing in solidarity with the Civil Rights movement in the 1960s, of Jews fighting against police brutality today, and of the Jewish religion’s core principle of justice.

These were the acts of (probably) one or two people, who doubtfully represent everyone on the streets right now. Most people out there surely have much more pressing issues on their minds than the policies of a country thousands of miles away. But nonetheless, the words expose a sentiment that is out there, and one that needs to be called out as wrong.

This article won’t even begin to analyze the merits of policy disagreements between supporters of Palestine and Israel. It merely hopes to shed light on the anti-Semitism vs. anti-Zionism debate. While the message itself is concerning, there is something more disturbing: the target.

By choosing a synagogue — not an Israeli embassy or any other Israeli-government funded structure — the person who graffitied this message shows one of two things:

Scenario #1: The perpetrator(s) is/are anti-Semitic in addition to anti-Zionist

If scenario #1 is the case, pro-Palestinian movements that claim they denounce anti-Semitism must condemn this act, because it targets a synagogue, as anti-Semitic. The words alone may be something the organization agrees with, but the target alters the message’s essence entirely.

If, as many claim, Judaism and Israel are not linked, then this graffiti would be the equivalent of damaging a Mormon Church in the name of protesting Russia’s invasion of Crimea, or vandalizing a Hindu Temple to express outrage over Turkey’s nationalistic policies. If there is no conflation between Israel and Judaism, then acknowledge the absurdity of this act as you would for all the other examples.

If those hypotheticals don’t sit right with you but protesting Israeli government policy by damaging a synagogue makes sense, then we’ve arrived at scenario #2: you acknowledge that Judaism and Israel are inherently tied. You hold that someone, just because she is Jewish, is responsible for Israel’s policy and should suffer the consequences, even if she has never stepped foot in the land or cast a ballot in that country. That’s anti-Semitism: it’s targeting Jews plainly for the fact that they are Jewish.

Targeting a synagogue not only exposes that condemnation of Israeli government policy is a disguise for hatred of Jews, but it’s also illogical. In fact, many Israelis — not just Jews — agree that Israel needs reform, just as many Americans agree — and are actively demonstrating — their “F*ck USA” attitudes. Political debate exists within Israel too. If Donald Trump does not represent all Americans — which people make clear day after day — why does the Israeli government represent all Israelis. How could it possibly represent all Jews?

If targeting Jews 7,500 miles away from Israel for the policy of that state is not anti-Semitism, what is?

People and organizations who say they draw the line at anti-Semitism yet fail to condemn it here are lying. Silence is complicity.

About the Author
Shauli Bar-On is a law student at the University of Southern California Gould School of Law. He is a veteran columnist for his university's daily newspaper. An award-winning moot court and mock trial competitor and a fierce defender of civil liberties, he frequently comments on sociopolitical issues. • • https://shaulibaron.com/
Related Topics
Related Posts
Comments