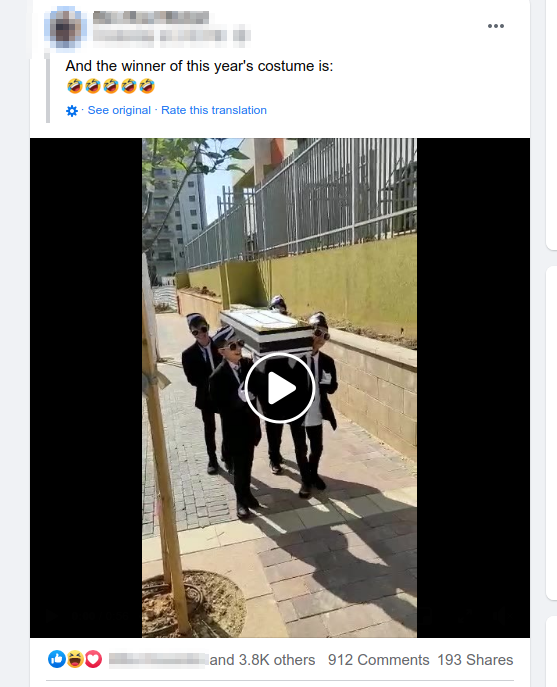 A video of kids in Tel Aviv carrying a mock coffin in a local take on the Dancing Pallbearers. Source: Facebook

At the time of writing it’s drawn more than 900 comments and 193 shares on Facebook.

Here are the latest comments (translated from Hebrew for the most part):

“Gigantic!” (Hebrew slang for more or less the same thing).

I’m writing this during the closing hours of the Jewish fast day before Purim (Ta’anit Esther). So excuse my somewhat curt and disorganized thoughts.

Yes, I get what the parody is a take on.

Know Your Meme has the details for those interested.

If you don’t feel like clicking I’ll give you the rundown (as we’re talking about internet stuff, I should call that the TL;DR).

The social media influencers of this world superimposed catchy rap music onto a video of a funeral procession in Ghana dancing with a coffin.

In true internet style, the video went viral. Dancing with coffins is a thing in Ghana apparently. By the way, in Ghana, the bodies are real. As is the death involved in the funerals.

I don’t find that funny. I don’t find emulating it in “honor” of Purim funny either. And yes — I have a sense of humor.

Lest the above wasn’t enough outrage for you, here’s a little more about why I think having your kids dress up as pallbearers and carrying a mock coffin during Purim is in extremely bad taste.

We’re currently in the midst of a pandemic

The fact that these youngsters are imitating a flippant internet meme shouldn’t make light of the fact that we’re currently navigating a global pandemic which is causing real loss of life.

At the time of this writing, two and a half million people have lost their lives due to the pandemic across the world, including tens of thousands here in Israel.

That death toll is real.

Across the world real people are being buried in real coffins, many of whom died at premature ages and had their lives cut short by the pandemic that has disrupted this Purim. Including in the city that this video was shot in.

I can only imagine the pallbearers aren’t smiling and dancing as they bury actual people who lost their lives due to this pandemic.

Now — of all times — is not a time to trivialize or make a fun out of the loss of life.

Young children dancing up as funeral undertakers is wrong

I was disappointed to see that nobody thought the idea of getting your kids to dress up as pallbearers and carry a mock coffin is …. potentially mentally traumatizing.

I’ll leave this one hanging in the area as I’m neither a psychologist nor a parenting expert.

But I am a human.

And I find the image of young children carrying a mock coffin through the streets of Tel Aviv somewhat sickening.

Purim is a great time to have fun.

But surely there are more tasteful ways to find a creative costume.