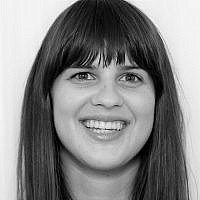 The Blogs
Leah Jordan
Apply for a Blog
Please note that the posts on The Blogs are contributed by third parties. The opinions, facts and any media content in them are presented solely by the authors, and neither The Times of Israel nor its partners assume any responsibility for them. Please contact us in case of abuse. In case of abuse,
Report this post.

On 16 May, more than 50 of us – British Jews with a variety of political beliefs – gathered in Parliament Square to mourn the deaths of the Palestinians killed by the Israeli army.

We came together, united in our grief for the deaths of so many and in our anger at the Jewish establishment’s failure to condemn the occupation and siege of Gaza that caused such violence.

As Jews, we decided to express this grief and anger in the most Jewish way possible. We recited poems and read texts inspired by our tradition. We sang the Hebrew songs of freedom, peace and justice, with which we grew up. We read out loud the names of those who were killed; and we finished by reciting Kaddish, the beautiful prayer remembering those who have died, which concludes with a plea for universal peace.

I attended as a rabbi and led us in that Kaddish prayer – and am proud to have done so. I call on other leaders in our community to stand with us. Our tradition teaches that justice must underlie true peace. There will never be peace in Israel, which so many of us love, unless there is an end to the injustice of the occupation and the siege on Gaza. As the prophet Isaiah tells us, the ultimate aspiration is that we will be “repairers of the breach, restorer of streets to dwell in”.

About the Author
Leah serves as the Progressive Chaplain for Students for Liberal Judaism, working with university students, and as the rabbi of the Norwich Liberal Jewish Community. She grew up in the great American Midwest, learned Torah in Jerusalem and as a Fellow at Yeshivat Hadar in New York City, before moving to London a number of years ago to complete her rabbinic studies at the Leo Baeck College.
Related Topics
Related Posts
Comments