A lot is at stake in this week’s elections, not the least of all for Arab Israelis fighting for the right to live in their homes. But if the Arab parties don’t get enough votes, the results can usher in disaster for the community.

I spent Friday afternoon on Yefet street in Jaffa, a main thoroughfare in the Ajami neighborhood about a kilometer south of the trendier Flea Market and old city area. Ajami is a mostly Arabic-speaking section that has a troubling history in which thousands of homes were claimed by the Israeli government in 1950 as an overt attempt to Judaize the city and prevent Palestinians who had fled in 1948 from ever returning. Palestinian families were not only deprived of their properties, but they were also forced to live in an imposed ghetto, often several families to a home – a situation that was protested against by Holocaust survivors who shuddered at the thought of Jews imposing ghettos.

Today, decades later, only 4,000 of the 100,000 Palestinians who once lived in Jaffa remain, and many are still suffering from those events. The Israel Lands’ Authority’s public housing arm, Amidar, has been trying very hard to remove Palestinians from the neighborhood through a strategy of forced evictions.    An estimated 1500 families are facing eviction, some with evacuation orders by Dec 31. 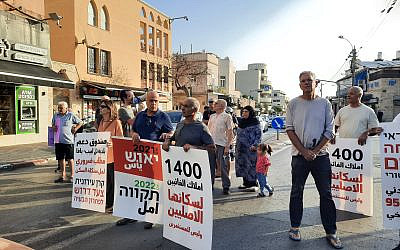 A group of Arab and Jewish protesters stop traffic on Yefet street in the neighborhood of Ajami in Jaffa, 28 Oct 2022. Photo by Elana Sztokman

With these orders looming, a group of Palestinian and Jewish Israelis has been protesting every Friday for the past year and a half in order to protest the evictions. They come out with their posters and megaphone hoping to grab people’s attention. Many passersby honk in solidarity. But the general apathy and sense of powerlessness are palpable. The long-term impact of Israel’s inhumane approach to Arab Israelis is that the community has lost faith in the system.

The first time I attended one of the protests, nearly a year ago, around ten people attended, mostly Arab. This time, some 30-40 people were there, including some Jewish Israelis who shouted in the megaphone in Hebrew, “Jews and Arabs oppose the evictions!” and “Jaffa refuses to give in to apathy!” 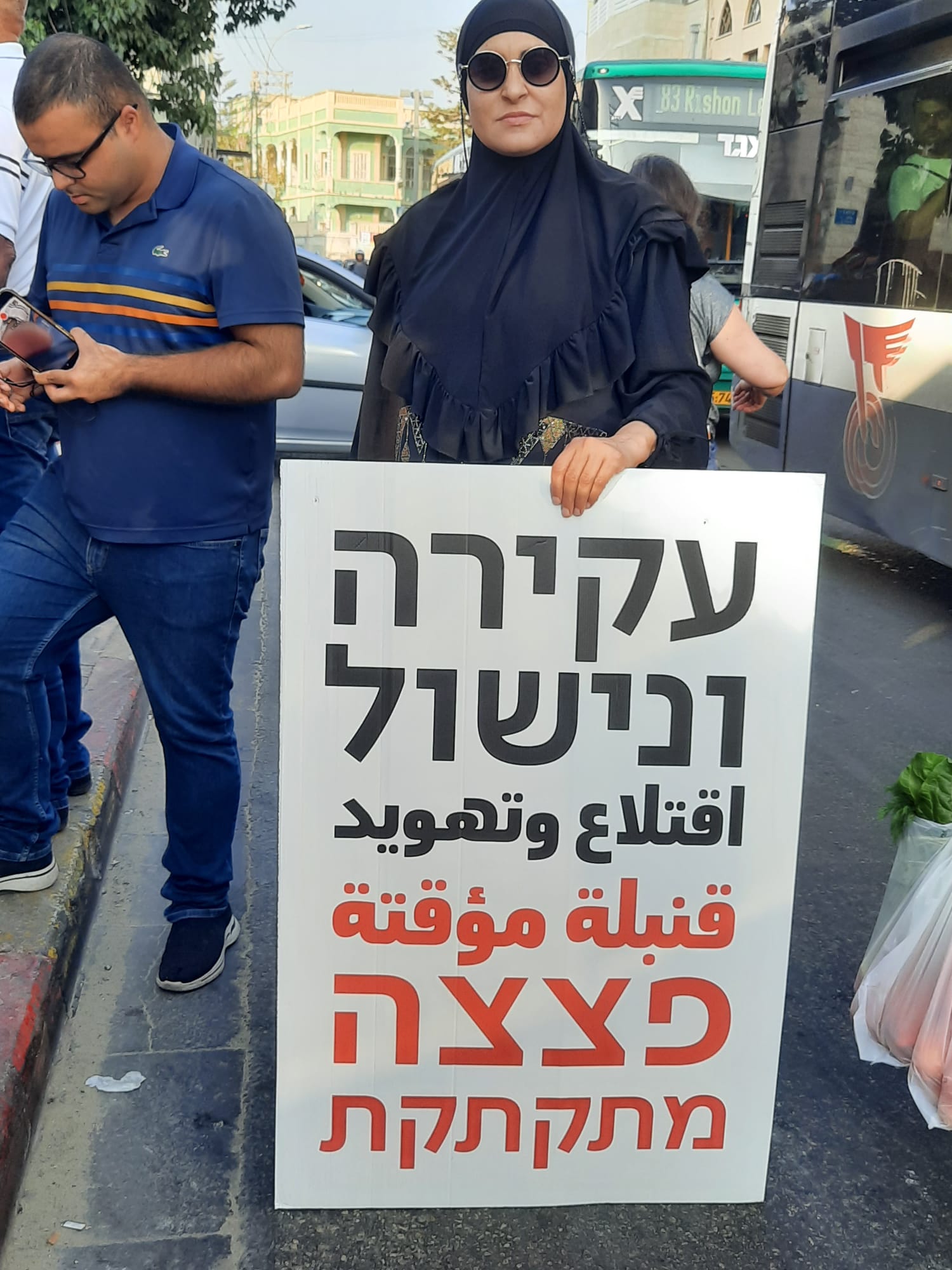 The turnout and energy have definitely improved, but I’m not sure if it has yet made the impact that it should.

The response to these protests overall has been, well, absent. The media, the municipality, the housing ministry, and Amidar, have mostly continued as if there is no protest. Tel Aviv Mayor Ron Huldai, who is up for reelection in 2023, had promised to create a fund to enable those facing eviction to buy the homes that they have been living in, sometimes for 60-70 years. But his proposal is apparently stuck in committee in the Housing Ministry, according to a spokesperson from his office.

Meanwhile, with national elections only days away, the disillusionment of the Arab population of Jaffa can have crucial ripple effects. If Israeli Arabs don’t vote, then that can potentially cripple the ability of the Left to form a government, and numerically gives Bibi’s camp a clear advantage.

Yet, if Bibi gets a mandate, he will likely bring into power the likes of Smotrich and Ben Gvir, Kahanists with an overtly racist, violent agenda.

We know what this would mean for Arab Israelis. It is too ugly to even spell out here.

We keep hearing that this is the most important election yet, with so much at stake. Israelis, I think, are tired of hearing that, after five elections and almost as many stalemates. But I think that, despite the weariness of it all, this election may in fact be crucial, in particular for Arab Israelis.

A right-wing government with Ben Gvir pulling strings would spell disaster for the already struggling Palestinian community, as well as for democracy in general.

And at the same time, I continue to shudder when I think about what Tuesday’s outcome may potentially bring.

About the Author
Dr Elana Maryles Sztokman, two-time winner of the National Jewish Book Council Award and winner of the Gourmand Award, is a Jewish feminist author, activist, educator, researcher, indie-publisher, coach, consultant, and facilitator. She is the founder of the Jewish Feminist Academy (www.jewishfeminism.org) as well as Lioness Books and Media (www.lionessbooks.com) She writes and speaks widely about culture, society, gender, and equality. She has been involved in many causes, is one of the founders of Kol Hanashim, the new women's political party in Israel, and is Vice Chair for Media and Strategy for Democrats Abroad-Israel. Follow Elana's newsletter, The Roar, for news and updates, at https://elanasztokman.substack.com/ or contact her at elana@jewfem.com