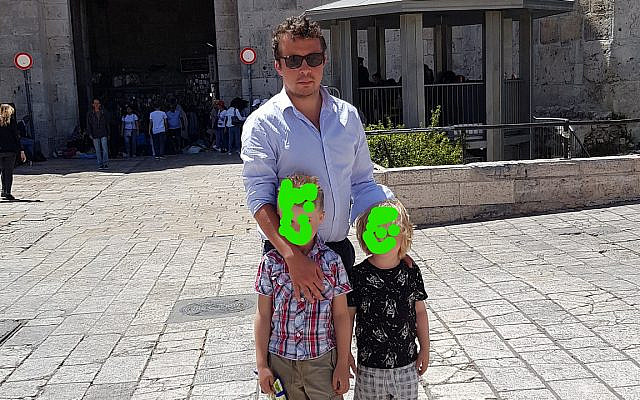 Me and kids in front of Damascus Gate. Not afraid. (Copyright: Jonas Amir Kadah, 2019)

Israeli law, the nation bill law constitues that anyone visiting an enemy country, if the citizenship was granted upon false statements OR by acting in a way not loyal to Israel – may be subject of revoked citizenship.

I am loyal to Israel. But what defines my loyalty? Who sets the standard threshold of loalty to The State? What is considered un-loyal?

There is a phenomena among Israels minority population – especially among arabs, druze and bedouins that one should keep their head down and just be compliant with whatever Israel does.

This phenomena is an issue – in what other developed democracy should one feel fear of repercussion, collective punishment or actually being detained or delayed upon travelling by plane abroad because of this vague formulation?

But it doesn’t end there. Many minorities, depending on their geographical settle and the definition of them as Palestinian Arabs in East Jerusalem or be it circassian monks living in a monastery – they actually have to apply to get a citizenship. It sounds easy, but several accounts and testimonies has proven this to be a lengthy process of bureucracy – with some cases reaching The High Court, just because of bureucratic hindrances designed to make the application as hard as impossible. That kind of bureucratic design makes most people turn away and give up.

At the same time – the Diaspora are granted citizenship upon arrival, few questions asked. While it’s their absolute fair right to receive it – the bureucratic nightmare for others leads to outright discrimination.

And I feel afraid of my own citizenship. I have stuck my head out several times on this blog – pointing on improvements that can be done and telling about injustice. Should I be considered as disloyal to Israel by using my right to speak freely? What will my relatives face?

Some has even warned me about writing here – I brushed their concerns off my shoulder by stating they suffer from paranoia. But now – when Netanyahu seems to stay in charge, and perhaps someone important at the Ministry of whatever will read this and my past blogs and consider me disloyal?

How can it be that me, living far away, working even further away – have to bear the fear upon my shoulders? This indescribable fear and worry about actually loosing my citizenship just because I write a few words on a blog for Times of Israel.

I’m not disloyal in any way at all. I am pro-Israel to a point that people think I’m biased by Netanyahu himself. Someone in Berlin once asked me “Are you actually a member of Mossad trying to recruit me or what?”. That’s how freaking loyal I am.

But I am also a fierce critiqeur of anything unjust. This resembles me in my studies, at my job and on my free time. I question things because I think it’s fair to do so if anything seems unjust or not thought-through enough. Or just being biased or racist.

I used to post all my texts on my Facebook-page before, but I have become selective due to the fact that some relatives don’t agree with me. Some friends have become ‘frenemies’. A great word. Frenemies. We have so many of them.

In opposite of what Israelis think about Sweden – most, if not all people I meet are curious. They want to know more. They want to visit Israel. I encourage them to go. Despite Corona this and Corona that we to keep living in the end.

I dismiss the Palestinians living in the West Bank, since I know they see the Arabs of Israel as traitors. Now how does that sound to us? To me? It sounds like they can form their own state. No Arab Israeli is interested of being part of that. They want to be Israelis to it’s fullest extent. There is a new, pemrogressive generation of millenials growing up in that community. They discard religious and familt values. They want to break free. They want to serve Israel by doing Civil Service or actually join the IDF.

The obstacles for them doing that is not only bureucratic and political – but also the fear of repercussions at home. Talking about being placed between a rock and a hard place. And the distrust among the general Jewish population towards them when doing their service. I can only imagine what it could feel like.

There is a Swedish saying that goes “Don’t paint Satan on the wall before knowing”, but as it is – we are all in a state of transition. Electionwise, demographical-wise and heck even come to terms that we have to live side by side the rest of our lives no matter what.

I will always be loyal to Israel, the country that has taught me so much on what life actually is about. Most of the times in a hard way – but in the end in a good way. It sort of gave me a shield to counter and overcome almost anything.

So, thank you Israel and I hope you can see through your fingers on me and my fierce critique.