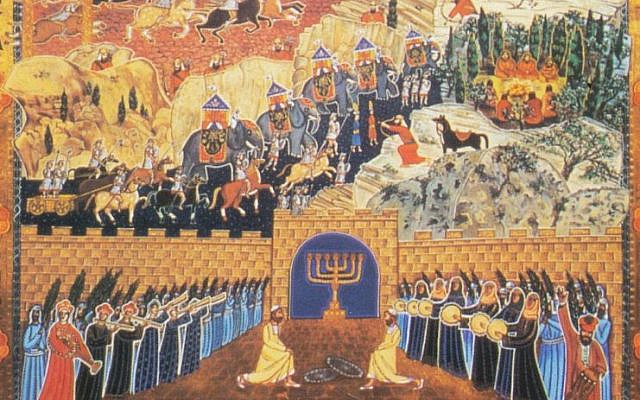 From Ori Sherman's 'Story of Hanukkah,' in 1985, (The Magnes Collection of Jewish Art and Life, UC Berkeley, via YouTube)

As Hanukkah approaches, some thoughts for my brothers and sisters in the Land of Israel and the Diaspora, and for our friends everywhere.

In the late 1920s, a Russian Jewish émigré historian of antiquity living in Germany wrote a learned article on the revolt of the Hasmonean clan in Israel against Seleucid Greek rule in the mid-second century BCE. Several years later, the author signed a contract for a whole book on the Maccabees with the publisher Paul Siebeck in the latter’s hotel room in Berlin. On that same day, January 30, 1933, Hitler was declared chancellor.

Schocken Verlag published Elia Bickerman’s finished volume, Der Gott Der Makkabäer (“The God of the Maccabees”), four years later, in 1937. To many German Jews, it offered encouragement and comfort in that hideous time of a kind that the author, who had just turned 40, had not foreseen or been able to imagine.

Bickerman escaped the Nazis and took up a teaching post at Columbia University in New York. There, many years later, he supervised the doctoral work of a Russian Armenian girl born in Paris whose family had also fled the onslaught of fascism. The young woman went on to become a world-famous Byzantinist and historian of early medieval Armenia. Nina Georgievna Garsoian’s thesis was about the medieval Paulician heresy: it remains authoritative and is still read by those who study such matters. Nina was my teacher and inspiration; and we remained close friends until her passing late last summer at the age of 99.

Professor Bickerman, to hear Nina tell it — and the way she told stories kept you on the edge of your seat — was a drily precise and exacting taskmaster who did not suffer fools gladly. His book is not, for the most part, a partisan work designed to uplift or caress its reader’s sentiments. He has few kind words for the Temple priesthood; he does not allow the Maccabees to emerge as entirely unblemished champions; and he refrains from oversimplifying or devaluing classical, Greco-Roman civilization in the way pietists tend to do. Indeed, one would not expect an authentic scholar to do those things, no matter how dire and challenging the circumstances.

But some of the power of the subject still glimmers through the careful prose. On page 92 of the English translation, which was published in 1979 — two years before Bickerman’s death in Jerusalem — he says, “The deeds of the Maccabeans are worth remembering forever only because they resulted in the survival of monotheism… Man has been deceived and disappointed by innumerable alleged truths — but never by the one truth of the uniqueness of God.” Very strong stuff indeed.

Now, a Hellenized Jewish leader named Menelaos led the assimilationist party in Jerusalem that collaborated with the Seleucid king Antiochus IV and favored making the religion of Israel fully pagan and polytheistic. In the Author’s Preface to the English edition, Bickerman concludes, “There can be no doubt that Menelaos’ Reformation would have succeeded in Jerusalem and become a new orthodoxy, and the remaining Old Believers [i.e., authentic Torah Jews – JRR] would be only a small heretic minority among the paganized Jews — if the Maccabees had lost.”

Let us pause and think about this. Bickerman, as I said, was in general an exceedingly sober historian, not given to flight of imagination about scenarios of counter- or alternative-history. But he witnessed and experienced the descent of Europe into darkness and the end of the 2,000 years of Jewish life there. He could and did look unflinchingly at what might have happened, farther back in the past, and set aside the careful, balanced language of erudition to speak the truth.

Suppose the Temple of Jerusalem had become one more Greco-Oriental shrine of a syncretistic cult, with temple prostitution and sacrifices to many gods along with the local divinity — like Commagenian Nimrod Dagh or the Serapeum of Alexandria. By the 160s BCE, the Seleucid Empire was already giving way to the rising power of Rome; and in time Judaea would have become one more province of the next world empire, with Latin inscriptions alongside the usual Greek and Aramaic ones, and statues of caesars and imperial gods added to the ones already standing on the Temple Mount. Jerusalem would very likely have endured for a time as a minor and forgettable town of antiquity, shadowed by the greater size and vitality of Alexandria and Antioch. Then it would have died of old age, a city without a seacoast harbor or navigable river, forgotten by humanity except in some historian’s glancing historical digression.

But the eclipse of the little Middle Eastern hill town would be but a drop in a black tidal wave of oblivion. For it is not the stones of Jerusalem, but its spirit in its letters, whose loss would have doomed the planet forever.

Nobody would remember that there had been a Ten Commandments. No “Thou shalt honor thy father and thy mother.” Ancient pagan Greeks sometimes pushed elderly parents from cliffs to their death — they were regarded as useless eaters. No “Thou shalt not commit murder.” As technology progressed — and there were excellent heathen inventors, engineers, scientists — the world might see bigger coliseums, new and improved gladiatorial contexts, and more exquisite means of killing.

Romans took Aristotle’s definition of man and came up with one for slaves: animated machines capable of reasoning. There was no common human denominator, no intrinsic human dignity and worth. From what we know, is it all that hard to imagine a world of “supermen” served by disposable “subhumans”? Nobody would have remembered the story of the Exodus of an entire enslaved nation from Egypt, or, before that, the creation of man by a God Who loved and cared for him as a father and Who wanted to make a covenant with him. Nobody would feel obliged by any supernatural law to love his neighbor as himself, or to love the stranger since he had once been a stranger.

No child would ever have been born in Bethlehem, sang the Psalms, studied the Torah, gathered a group of pupils around Him, and stood on a hill above Lake Kinneret to proclaim to the world that it is the poor in spirit, those who mourn, and the peacemakers who are blessed, not the arrogant, the powerful, the successful, and the warmongers. He would not have been there to face down Pontius Pilate and go to his death on the Cross, sacrificing himself to take away the sins of the world.

There would have been no Church of Jerusalem, no Hillel, no Zealots ready to fight for freedom. The Temple would not have burned. There would never have been a last stand on Masada. There would not have been a Yochanan ben Zakkai to found a little school in Yavne to keep the flame alive, that there might be a Mishnah, then the Gemara, then Maimonides and Yehuda ha-Levi and Rashi, and the Ba’al Shem Tov and the Piaseczner Rebbe and Dov Ber of Mezerich and the Alter Rebbe and the Kotzker, and Marx, Einstein, Freud, Kafka, Trotsky, Rosa Luxemburg, Bruno Schulz, David Ben Gurion, Moshe Dayan, Golda Meir, Philip Roth, Allen Ginsberg, Bob Dylan, Isaac Bashevis Singer, R.B. Kitaj, and you and me.

There would have never been a St. Augustine hearing a child’s voice in the garden telling him to read: “The night is far spent, the day is at hand: let us therefore cast off the works of darkness, and let us put on the armor of light. Let us walk honestly, as in the day; not in rioting and drunkenness, not in chambering and wantonness, not in strife and envying. But put ye on the Lord Jesus Christ, and make not provision for the flesh, to fulfill the lusts thereof.” (There would be no destination for the Pacific Coast highway either, since Augustine’s mom’s name is Santa Monica. There would not, for that matter, be a San, Santo, or Santa Anything.)

There would never have been a prophet called Mohammed, to spread to the farthest corners of the world the message that there is no god but God. There would be no Holy Qur’an to relay this message from heaven to every man, woman, and child, of every age and tongue and color: “By the morning hours and by the night when it is stillest, thy Lord hath not forsaken thee nor doth He hate thee, and verily the latter portion will be better for thee than the former, and verily thy Lord will give unto thee so that thou wilt be content. Did He not find thee an orphan and protect thee? Did He not find thee wandering and direct thee? Did He not find thee destitute and enrich thee? Therefore, the orphan oppress not; therefore, the beggar drive not away; and the bounty of thy Lord – let that be thy discourse.”

Imagine there’s no Hanukkah. Then, thankful that there is, light a candle and thank God for His light and the martyrs who have lived, labored, and died to keep it from being extinguished. When I was a boy, I read a wonderful novel by Madeleine L’Engle, A Wrinkle in Time, in which angels masquerading as old ladies enlist a band of American children on a fearful cosmic quest against evil. To encourage them, the polyglot angels now and then recite lines spoken by the great and holy souls who have trodden the earth. One of their quotable quotes in English has always remained with me. In mid-October 1555, Hugh Latimer and Nicholas Ridley were about to be burned at the stake at Oxford for their unshakable religious convictions, and Latimer said: “Play the man, Master Ridley; we shall this day light such a candle, by God’s grace, in England, as I trust shall never be put out.”

These are dark and troubled times; but we, the Children of Israel, have faced worse along this road. Then as now we shall, by God’s grace, find the strength within us to play the man. To light a candle. Like the Maccabees. Happy holiday! חג שמח

About the Author
James R. Russell is Mashtots Professor of Armenian Studies, Emeritus, at Harvard University, and has served as Distinguished Visiting Professor of the Hebrew University of Jerusalem, Associate Professor of Ancient Iranian at Columbia, and part-time Lecturer in Jewish Studies and Biblical Hebrew at California State University, Fresno. He serves on the Editorial Boards of the journal Judaica Petropolitana, St. Petersburg State University; the journal Linguistica Petropolitana, Russian Academy of Sciences; and the journal Homo Loquens, Russian Christian Humanities Association, St. Petersburg. He is a founding member of the International Association for Jewish Studies, chartered in the Russian Federation. He holds the PhD in Zoroastrian Studies, from the School of Oriental Studies of the University of London; B.Litt. (Oxon.); B.A. (summa) (Columbia). His recent books include "Poets, Heroes, and Their Dragons", 2 vols., UC Irvine Iranian Series, 2020, and "The Complete Poems of Misak Medzarents", CSU Fresno Armenian Series, 2021.
Related Topics
Related Posts
James R. Russell